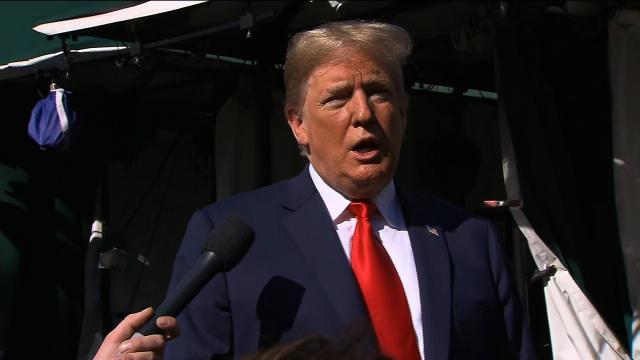 "We all might look back and say we remember where we were when it happened," the CNN anchor said on the day Donald Trump entered the presidential race with a bang.

It was 11 a.m. on June 16, 2015. No one, except maybe Trump, knew that he'd go on to be the President of the United States. But CNN's news coverage of the campaign launch foreshadowed all the controversies and surprises that the election season held in store.

Among the anchors and commentators, there were some laughs about Trump; a lot of skepticism; but also some serious recognition that he could turn the Republican primary upside down.

At one point Berman even talked about viewers' complaints that CNN was giving Trump too much airtime -- a harbinger of the media saturation that was to come and the controversy surrounding it.

The word "entertaining" kept coming up again and again.

CNN political commentator Errol Louis noted that Trump had lots of fans, even as analyst John Avlon said he thought the speech was "unhinged." And SE Cupp foretold the civil war within the GOP.

Berman's co-anchor Kate Bolduan began the 11 a.m. hour by saying "we could be moments away from seeing a 12th Republican candidate enter the race for the White House."

Berman said "The question is, is he serious this time or just selling something?"

Berman noted that there was ample reason to be skeptical: "Trump's flirtations with running have been a quadrennial exercise in the theater of the absurd and have earned him a fair amount of ridicule."

He tossed to a clip of Seth Meyers joking in 2012 that "Trump has been saying that he will run for president as a Republican, which is surprising since I just assumed he was running as a joke."

Cupp, a conservative commentator, received an advance look at the embargoed version of Trump's speech. She confirmed that Trump was, indeed, entering the race.

At that moment, Trump took his now-famous ride down the escalator at Trump Tower. It was a humorous moment.

"Let's take this in," Berman said. "Let us watch Donald Trump declare his candidacy for president."

The next 45 minutes were mesmerizing. Trump was provocative, pompous and almost impossible to stop watching. All the cable news networks showed his speech live.

Right afterward, Cupp said, "How do you even have a straight face right now? There are no words to describe what just happened."

Trump's speech deviated wildly from the embargoed script she had seen beforehand.

"Trump was winging it from the very beginning he walked on that stage," she said, describing the unscripted style that is now a Trump signature.

Cupp and the other commentators repeatedly called it "entertaining." Louis said people like to compare Trump to PT Barnum. Avlon was dismissive, saying, "This is a reality TV show star trying to run to pump up his profile even more because he is drunk on pure ego."

But at the same time, Berman correctly observed that Trump would likely qualify for the summer and fall debates.

Looking back one year later, Berman said in an email, "I covered Trump's flirtation with running in 2011, including his exploitation of the 'birther' question. In fact, I was with him in New Hampshire the day that President Obama released his birth certificate that year. Based on my past experience, I really genuinely did not believe he would run this time around. So when he actually went through with it on our air, it was surprising to me."

It was surprising to many other observers, as well.

"In that moment, I knew I'd be covering a candidate like no other," Cupp said one year after the announcement. "I didn't know, however, for how long."

Cupp became an outspoken opponent of Trump -- for the reasons that she telegraphed on the air during the very first hour of his campaign.

"Watching that announcement was a combination of shock, amusement, and a discomfort that would become my constant companion covering Trump's campaign," she said.

Update: This article, originally published in 2016, has been updated.