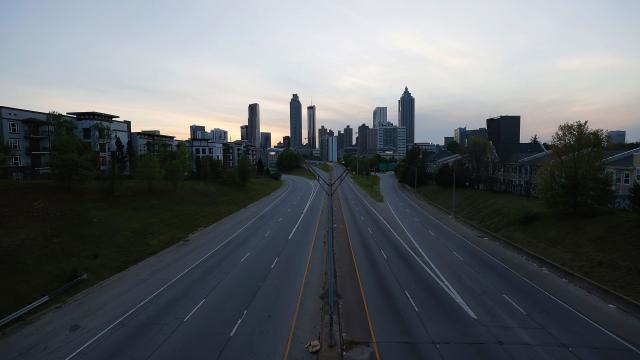 CNN — All eyes were on Georgia three weeks ago as the state became one of the first to allow some businesses to open their doors, welcoming customers back after weeks under a coronavirus lockdown.

At the time, many businesses owners who spoke to CNN were conflicted as they tried to balance their economic interests with the safety of their staff and customers. Some opted to stay closed until they felt it was safer.

"Do I think it was a little early? Yes, in the grand scheme of things," Cindy Shera, owner of the Atlanta restaurant The Pig & The Pearl, told CNN Friday. "But I liked having the choice."

Three weeks later, business owners like Shera are continuing to carve their own paths forward, tweaking their business models to earn the trust of their customers while keeping their employees and patrons healthy.

"I've been working every day trying to figure out a new business model because my old business model doesn't work anymore," she said. "We were a full-service casual restaurant, but that has all but dried up."

Shera started curbside takeout on May 1, but it was last weekend that she reopened her restaurant's patio for customers.

Right now, Shera's restaurant is doing carryout and serving customers through a window. She lets them sit on her patio, but she has yet to move to dine-in service, in part because she's trying to gauge and respect her customers' level of comfort.

"I don't know about full service moving forward," she said. "I would love to get back to something like that. But right now we're we're trying to research other avenues that would provide the guest with a fantastic product and a comfort zone and following all of the safety protocols without going overboard."

Business is 'picking up, slowly but surely'

As of Friday, Georgia had more than 36,000 cases of coronavirus, according to Johns Hopkins University data. More than 1,500 people have died.

Georgia's rate of new cases has been trending unsteadily downward in recent days, per Johns Hopkins. The state averaged 669 new cases a day over a seven-day period that ended May 13, down about 6% from the previous week.

"It's something that we should continue to be mindful of and continue to be thoughtful about as the state has reopened and people are going about their day-to-day business," the mayor told the Atlanta City Council during a weekly phone briefing Thursday.

Georgia businesses have taken safety seriously, according to Chris Clark, president and CEO of the Georgia Chamber of Commerce.

Over the past several weeks, he said, business owners have been "very slow, methodical, asking lots of questions, taking the time to plan out" their reopenings.

But those who spoke to CNN are just happy to be back at work.

When he reopened last month, Eric Greeson of Jenkins Barbershop in Douglasville, 20 miles west of Atlanta, expressed some hesitation at the fact that Gov. Brian Kemp's reopening plan didn't have the backing of President Donald Trump and health experts. But ultimately, Greeson felt he had no option but to reopen his family business.

On Friday, he told CNN, "We're hanging in there."

"After the lockdown, we needed it," he said. "We really did."

Southern Lanes, a Douglasville bowling alley, opened the first day it was eligible. At that time, Deborah Holland, one of the owners and a lung cancer survivor, told CNN she and her business partners would be serious about keeping things clean and checking customers' temperatures.

"It's picking up," Holland said of business Friday. "Slowly but surely."

The bowling alley saw a packed house Tuesday night using only half of their 32 lanes, Holland said. To maintain social distancing, "We even had to turn away some bowlers."

Under a new executive order Kemp issued this week, Georgia's bars and nightclubs will remain closed through at least May 31. Kemp said Georgians should continue to follow social distancing and gatherings of more than 10 people remain banned.

But the order also loosened some other restrictions. For example, restaurants are now allowed to have parties of 10 at each table, up from the previous limit of six.

Despite this, the restaurant Le Colonial in Atlanta continued to limit party sizes to six per table this week.

On Thursday night, tables were kept at least 6 feet apart from each other. Potted plants and trees were spread throughout the restaurant, not just for aesthetics, but to keep tables separated from one another. Menus are disposable. Staff, both in the kitchen and on the floor, wore masks and gloves.

But there's a long road ahead for businesses to gain the confidence of consumers and employees, Clark of the Chamber of Commerce said. Businesses will need to have both new business models and a ready supply of PPE.

"This isn't a short-term, 'I'm going to repoen in this atmosphere for two to three weeks,'" Clark said. "You're going to have to operate like this for the foreseeable future."

"I don't care what your company does," Clark added. "Every business in America is in the health and wellness business."

That's something that both The Pig & The Pearl and Le Colonial appear to recognize.

"We are trying to watch what public behavior is like and what people are really thinking about the pandemic," Shera told CNN. "And we're trying to react to that and we're trying to be super safe and make people comfortable when they come in, because the only common thread we still have is hospitality."

"For us right now, we're approaching this from a standpoint of sustainability and not profitability," Guyette said. "For right now, if we can sustain our business to get through the uncertainties of this world, we'll get to where we need to be."