Rogers also said the three were leaving in his testimony. Quoting Rogers, Duke in the announcement said that the three "requested to step down."

All three would have played key roles in the operation of Duke. 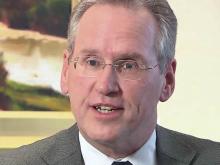 Sims was chief integration and innovation officer, the person responsible for integrating operations of the two firms.

Their depatures came a week after Johnson resigned under pressure from the newly created, combined board of Duke Energy and Progress Energy.

“We regret that John, Mark and Paula have decided to move on from Duke Energy," Rogers said in a statement.

"Since we closed the merger, we have spoken extensively with the members of our senior management committee. Our hope was that we could all work together to capitalize on the significant opportunities we now have as one company. While we encouraged the entire team to maintain their roles, John, Mark and Paula requested to step down and we wish them well.

“We are grateful to be able to draw from the deep bench of executives from both Progress Energy and Duke Energy and have already begun working to identify the best way to fulfill the responsibilities held by John, Mark and Paula," he added. "We look forward to executing on our strategy as one company and one team committed to offering significant benefits for customers, shareholders and the communities we serve."

Rogers was in Raleigh to testify about the removal of Johnson at a hearing called by the North Carolina Public Utilities Commission. Rogers said the Duke board has lost confidence in Johnson's ability to run the combined company.

Duke and Progress are integrating their operations.

Rogers said at the hearing that Raleigh remained an important part of Duke's operations.

McArthur served as executive vice president for administration and corporate relations as well as general counsel and corporate secretary.

His biography as posted by Progress:

"John McArthur was named executive vice president in September 2008. In that role, he is responsible for corporate and utility support functions, including Corporate Services; Corporate Communications; Human Resources; External Relations; Legal; and Audit Services. He serves as general counsel and corporate secretary, a position he has held since January 2004. Previously he served as senior vice president - Corporate Relations and as vice president - Public Affairs.

"McArthur came to Progress Energy in December 2001 after serving as a senior adviser to N.C. Gov. Mike Easley. McArthur directed major policy initiatives as well as media and legal affairs for the governor.

"Previously, McArthur handled state government affairs for General Electric Co. He also served as chief counsel in the N.C. Attorney General's office, where he supervised utility, consumer, health care and environmental protection issues. He was a partner in the Raleigh law office of Hunton & Williams. He also served as a law clerk to the Honorable Sam J. Ervin III of the U.S. Court of Appeals for the Fourth Circuit. A graduate of Davidson College, he earned his law degree from the University of South Carolina where he was editor-in-chief of the Law Review."

His biography from Progress:

"Before joining the company, Mulhern was the chief financial officer at Hydra Co Enterprises, the independent power subsidiary of Niagara Mohawk. He also spent eight years at Price Waterhouse in Syracuse, New York, serving a wide variety of manufacturing and service businesses.

Mulhern serves on the EEI Financial Executive Advisory Committee. He is on the board of directors for EXCO Resources as well as Habitat for Humanity - North Carolina. He has served in a number of volunteer and leadership roles with local and professional agencies ranging from St. Michael's elementary school to Leadership North Carolina and the Planning Institute of Central New York. He is a 1982 graduate of St. Bonaventure University. He is a certified public accountant, a certified management accountant, and a certified internal auditor. He has completed the nuclear executive program at the Massachusetts Institute of Technology."

Sims served as senior vice president for corporate development and improvement at Progress.

Her biography at Progress:

"In this role, Sims is responsible for implementing the "Balanced Solution" strategy to meet the future energy needs of our customers. Corporate Development and Improvement is also responsible for program development and construction of new generation projects, renewable energy and energy efficiency programs, supply chain, information technology and wholesale power operations. In addition, Sims is the executive sponsor for Continuous Business Excellence, Progress Energy's framework for improving processes, efficiency and overall cost management and has responsibility for environmental, health and safety.

"Sims serves on the Meredith College Board of Trustees."