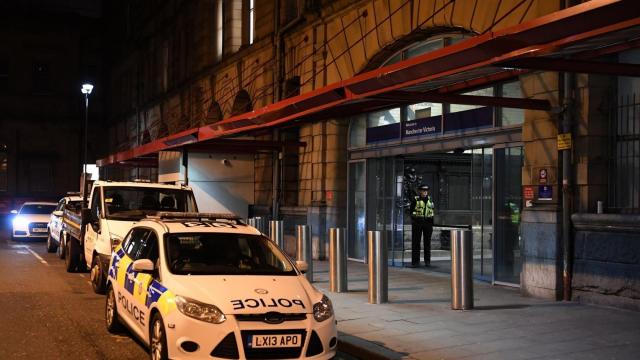 (CNN) — Police investigating the stabbings of three people at a railway station in Manchester, in northern England, on New Year's Eve have arrested a 25-year-old man.

The suspect, who is being detained under the Mental Health Act, is now in a secure medical facility, Greater Manchester Police said. Police are confident the man acted alone in "the final stages of the attack," they said.

But police didn't rule out the involvement of others at an earlier stage. "The investigation will continue and will examine if anybody may have encouraged or assisted the man to commit the attack," they said in a statement posted Wednesday on Twitter.

A male police officer was stabbed in the shoulder, and another man and a woman were taken to a hospital with serious knife injuries after the "horrific" attack just before 9 p.m. (4 p.m. ET) Monday at the Manchester Victoria railway station, police said in an earlier statement.

"We experienced a horrific attack on people out to simply enjoy the New Year's Eve celebrations in Manchester," Manchester Chief Constable Ian Hopkins said in a statement.

Counterterrorism officers were leading the investigation into the attack, which happened close to the scene of the Manchester Arena bombing that killed 22 people in May 2017, he said.

Police officers on Monday "acted with incredible bravery in tackling the armed attacker at the busy Metrolink station and ensured he was immediately detained," Hopkins said.

BBC producer Sam Clack was on the platform when the attack unfolded. Clack told the British broadcaster he heard a "blood-curdling scream" and observed what "looked like a fight going on ... sort of scuffle."

Clack heard the man distinctly shout, "Allah," he said, but he didn't hear the rest of the sentence.

"The police were on the platform very quickly," he said. Police used pepper spray and a stun gun to get the man to the ground, Clack said. "He was very much resisting arrest."

Shortly after the incident, Clack said on Twitter that he had "just been very close to the most terrifying thing. Man stabbed in Manchester Victoria station on tram platform. Feet from me, I was close to jumping on the tracks as attacker had long kitchen knife. Totally shaken. This is seriously messed up."

The two other victims, both in their 50s, suffered injuries to their abdomens, and the woman suffered additional injures to her face, police said, though their wounds are not considered life-threatening.

Police will consult with medical professionals to assess whether criminal charges can be brought against the suspect, Greater Manchester Police said Wednesday.

New Year's Eve fireworks at Albert Square went on as planned despite the incident, according to the Manchester City Council.