Three North Carolina entrepreneurs are bringing shade back to the beach 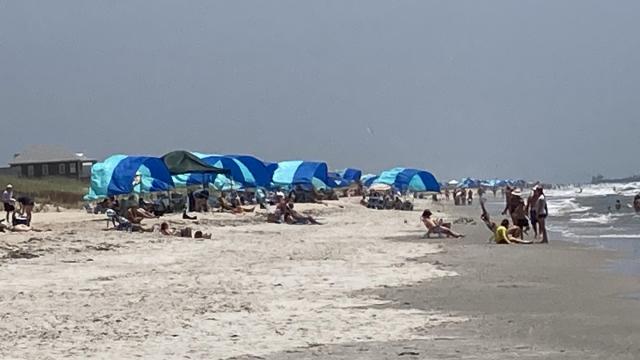 Fourth of July weekend means a trip to the beach for many North Carolina families. But what they may not know is that the blue and teal shades adorning beaches along the Eastern Seaboard were invented by three UNC-Chapel Hill graduates and are shipped right from downtown Raleigh.

Dane and Scott Barnes, two brothers who grew up in Winston-Salem, and their friend, Alex Slater, came up with the idea for their invention—later named the Shibumi Shade—after spending years lugging heavy and ineffective canopies and umbrellas to Emerald Isle for their annual family vacation.

In 2015, they started toying with the idea of creating something that worked with beach breezes, rather than fighting against them.

“We had the idea of like a sheet on a clothesline,” Dane Barnes said.

They made their first prototype using PVC pipe from a local hardware store and were surprised at how well it worked. People began approaching them asking if the product was for sale.

“After more and more people came up to us, we decided that maybe we should refine it and try to sell it,” Barnes said.

The first Shibumi Shades were sold in 2016, and the product’s popularity has since taken off. The finished design is a lot more portable than its PVC prototype, and weighs less than four pounds.

None of the creators are engineers, Barnes added—he studied business, his brother Scott majored in math and Slater studied English. Although all three founders had day jobs when they started the company, they each began working at Shibumi Shade full time in November 2019.

Barnes said that they now have customers who use Shibumi Shades at more than 400 beaches, primarily along the East Coast.

While he doesn’t know whether changes in travel plans due to COVID-19 has impacted their sales or not, Barnes said demand for the Shibumi Shade is currently high.

Roughly half of the company’s 23 retail store locations currently list the product, which costs $250, as sold out. Their website resumes accepting online orders on July 4th, but warns that they expect to sell out within minutes.

But they get new units in every week, and they expect to fill every order this year—and an even greater number of orders next year.

The company currently partners with two North Carolina-based sewing facilities and a Raleigh-based warehouse distributor, and is considering contracting with a third sewing company. Barnes and his co-founders value the fact that they are able to keep their operations based in the state.

“We were born and raised in North Carolina, and it’s always been home for us,” he said. “And we’re definitely proud that every single Shibumi Shade that has ever been made has been sewn in North Carolina."

The creators also place a heavy emphasis on customer relations. One of the three founders will text a Shibumi Shade customer from their phone when an order arrives, checking to see how their experience was.

“We do that because we want to break down the barrier between company and customer,” Barnes said. “We try really hard to have good customer service.”

As for the hardest part of running a small business, the creators agree that it was definitely selecting a name for their product.

After generating a list of over 300 contenders, they settled on Shibumi, a Japanese design concept that means the elegance of simplicity. It’s also the name of the apartment building in Chapel Hill where all three of the creators lived while they were undergraduates.

“So it’s kind of a fun double meaning for us,” Barnes said.

For more information, go to https://shibumishade.com/.

The NC News Intern Corps is a program of the NC Local News Workshop, funded by the North Carolina Local News Lab Fund and housed at Elon University’s School of Communications.