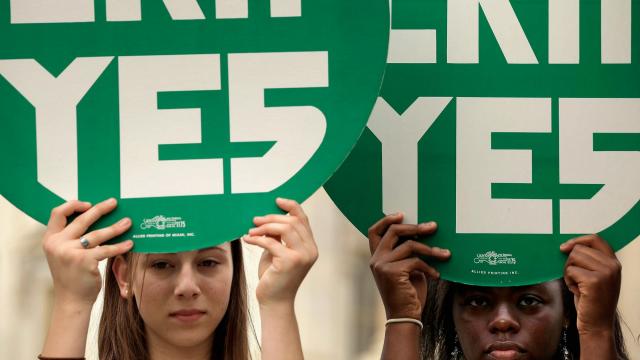 CNN — Three attorneys general of states that recently ratified the Equal Rights Amendment are suing to have the amendment added to the Constitution, challenging a Justice Department opinion that the deadline for passage expired decades ago.

In a complaint filed Thursday, the attorneys general of Virginia, Illinois and Nevada are asking the US District Court in Washington, DC, to force the archivist of the United States, who administers the ratification process, to "carry out his statutory duty of recognizing the complete and final adoption" of the ERA as the 28th Amendment to the Constitution. The ERA would ban discrimination on the basis of sex and guarantee equality for women under the Constitution.

The suit is the first legal response by liberal-leaning states to force ERA's passage following Virginia's ratification earlier this week, which supporters say is the final step toward the 38-state threshold necessary to enshrine an amendment in the US Constitution. Opponents argue the deadline to pass the amendment expired decades ago, and point to several states that are among the 38 that rescinded their support before the deadline.

The three Democratic attorneys general -- Mark Herring of Virginia, Kwame Raoul of Illinois and Aaron Ford of Nevada -- argue that the amendment is valid under Article V of the Constitution, which lays out the amendment process, and that the archivist does not have the authority over which amendments are added.

They argue that the deadline has not lapsed for the amendment, because the time frame is not included in the amendment's body text, and that states' rescinded ratifications are "constitutionally unauthorized and without legal effect."

The Justice Department has disagreed. Responding to a lawsuit brought by three conservative-leaning states, its Office of Legal Counsel declared earlier this month that the deadline to ratify the ERA has expired and the matter is no longer pending before the states. In doing so, the Justice Department has blocked the archivist, David Ferriero, an Obama appointee, from taking action.

The attorneys general of Alabama, Louisiana and South Dakota had sued the archivist in December, arguing that he is "acting illegally" by continuing "to hold open the ratification process" and refusing to recognize some states' rescissions of the amendment.

In a statement earlier this month, the National Archives said it would "abide by the OLC opinion, unless otherwise directed by a final court order."

Following Virginia's ratification on Monday, Herring threatened to "take action to ensure the will of Virginians is carried out" if the archivist refused to take action.

The National Archives confirmed in a statement to CNN Thursday that it had received Virginia's ratification documents and said it will take "no action to certify the adoption."

Congress passed the ERA in 1972, giving states a seven-year window to ratify the amendment. That deadline was later extended by three years to 1982.

The approval of three-fourths of state legislatures are required to ratify an amendment, though five states that formerly passed the ERA decades ago rescinded their support. Nevada ratified the ERA in 2017 and Illinois in 2018.

They claim that the archivist's "failure" to recognize the amendment's adoption "creates widespread confusion regarding the effect of the three states' recent ratifications" and "continues to thwart the will of the people."