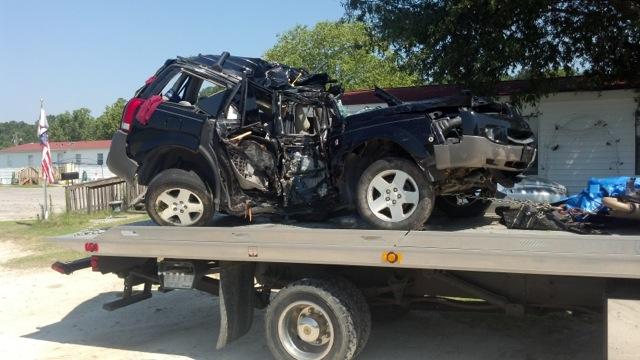 Raleigh, N.C. — Three recent graduates of Clayton High School died Saturday night when the SUV they were in slammed into a tree off Rock Quarry Road in Raleigh, according to the state Highway Patrol.

State troopers said Devin Mosteller, 21, of Clayton, was driving a Saturn Vue near the Battle Bridge Road intersection around 8 p.m. when he overcorrected, ran off the road to the right and hit a tree.

He and both passengers – Christopher Pretty, 18, of Clayton, and Adonis Banks, 19, of Middlesex – were pronounced dead at the scene. Banks played on the basketball team at Clayton.

Witnesses said the force of the impact caused the vehicle to wrap around the tree, warping its metal into a horseshoe shape.

"It was one of those wrecks that you only see on television," witness Michael Turnage said. "It didn't even look like anyone could possibly be inside of it the way it was smashed up."

David Carpenter said that he spoke with Mosteller at a birthday party hours before the crash.

"I looked him right in the eye before he got in the car," Carpenter said.

Troopers have not said what caused the crash, but they did say speed was a factor.

No other vehicles were involved.