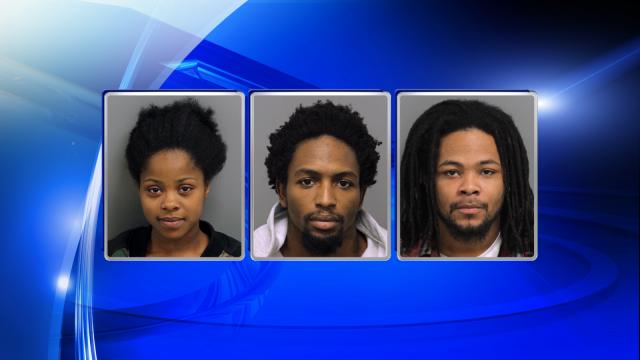 Raleigh, N.C. — Police charged three people in a case in which a man said he was robbed when he went to a Raleigh hotel room Wednesday morning to meet a woman.

Police have not commented on the investigation, but employees at Extended Stay America, at 4810 Bluestone Drive, called police shortly before 8 a.m. Wednesday after the man – wearing only boxer shorts – ran into the hotel's office reporting that two people hiding in the room robbed him.

"I was going in to visit a girl that I met, and she went in, and I don't know, this dude came out of the bathroom, and he had a gun," the man said in the 911 recording.

"They got my money, my car keys. I ran out of the room. I was barely naked," he added, saying the two men and woman fled in a silver Oldsmobile Alero.

Police took Graham, Alston and Watson into custody a short time later at a gas station near Crabtree Valley Mall – about 1.5 miles from the hotel.

Watson and Graham have numerous arrests on various charges. According to the North Carolina Department of Public Safety, however, Graham received probation for a larceny charge in 2012. Watson received probation and suspended sentences on a 2013 felony breaking and entering charge and a 2014 charge of possession of a firearm by a felon.