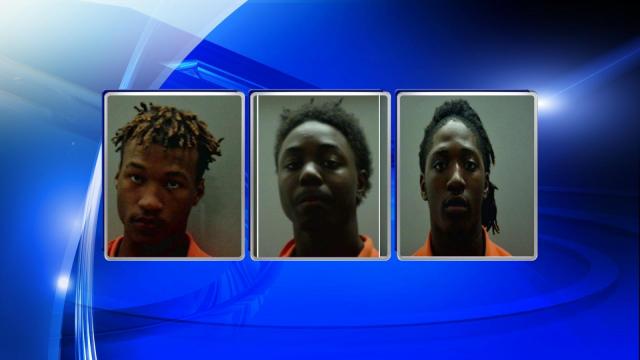 Deputies with the Edgecombe County Sheriff’s Office responded to the Dunbar subdivision around 8:30 a.m. in response to a break in in progress.

When deputies arrived, they found the three men near their car, which was parked at the back of the victim’s home. One man was able to get in the car and drove toward an officer who attempted to move out of the way. As the driver continued to move closer, the deputy fired his weapon and the car crashed into a tree. The man then got out and pointed a weapon at officers.

The driver, Calvin Terrell Canady, 19, of 101 Linden Place in Rocky Mount along with a second man identified as Demaris Rashon Avent, 18, of 4288 Wheel Court in Battleboro, ran into the woods. A third man, Steven Maurice Lloyd, 18, of 2148 Meadowbrook Road in Rocky Mount, was taken into custody at the victim’s home.

Police dogs were brought in to help locate the two men who fled. Canady was located and taken into custody a short while later and was treated for minor injuries by Edgecombe County Rescue.

Avent was unable to be located by police dogs, but was later arrested at his home.

Canady was charged with breaking and entering, larceny of a firearm, felony larceny, two counts of assault with a deadly weapon on a government official, and possession of a firearm by a felon.

Avent and Lloyd were both charged with breaking and entering, larceny of a firearm, and felony larceny. Lloyd was also served with outstanding paperwork from Nash County for communicating threats and from Edgecombe County for simple assault.