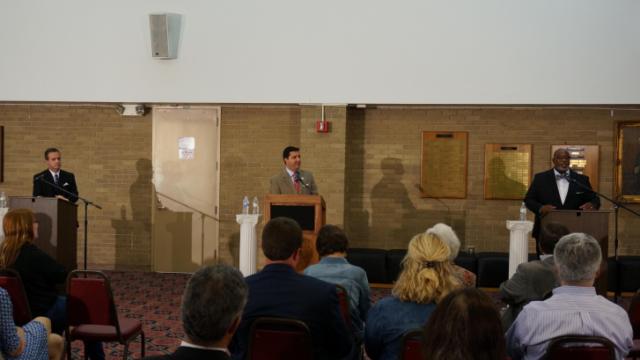 Hosted by the Greater Smithfield-Selma Area Chamber of Commerce, the forum gave voters a chance to hear the differences between Democrat Jonathan Barfield, Libertarian Wesley Casteen and Republican David Rouzer. The winner will replace Democratic Congressman Mike McIntyre, who chose not to run for re-election.

The Republican-leaning district takes in part or all of 12 different counties, moving south from Johnston County, picking up parts of Cumberland County and all of Sampson County before winding up in New Hanover County.

"If this race were measure in dollars and cents, the outcome would be a foregone conclusion," said Casteen, a lawyer and accountant from Wilmington.

He was referring to the fundraising advantage enjoyed by Rouzer that has allowed the Republican to put ads on broadcast television.

Aside from Sean Haugh, who is running for U.S. Senate, Casteen is the only Libertarian running for federal office in North Carolina this year, and he urged voters to look past partisan labels to see who has the better ideas.

"Adapting to change does not mean sending the same people back to Washington from the same parties that caused the problems," he said.

Rouzer, a former state senator, emphasized during the forum his experience working for U.S. Sens. Jesse Helms and Elizabeth Dole and repeatedly returned to the theme of cutting federal regulations as the key to solving a number of problems.

"We've got to get rid of the stupidity," Rouzer said, punctuating his point that it was federal regulations that were putting a drag on the economy and hurting businesses big and small.

The candidates for the 7th Congressional District met for a debate Thursday night in Smithfield. Among their most quotable lines:

"It starts with being an elected official who represents all the citizens. I often tell people that, when you die, there won't be a Republican or Democrat heaven or hell. Just heaven or hell."

"The questions and issues facing America are way more complicated than easy yes or no answers. The answers are never that simple. They are clouded by a thousand shades of gray."

"What we have in this country is not only precious, but it is exceptionally fragile. We have a duty and obligation to save our country, and it comes in 2014, the election coming up, and it comes in 2016, the election following. What happens in these next two elections is going to determine whether America survives or whether America does not survive."

Barfield, a county commissioner from New Hanover County, drew on his experience as a father, real estate agent and preacher in his answers and appealed for a more civil public discourse among public officials.

"I find the citizens are tired of the Hatfields and the McCoys," Barfield said, describing the feuding political parties in Washington, D.C.

On some policies, the differences between the candidates were stark. For example, asked about raising the federal minimum wage to $10.10 per hour, Barfield said he backed the move, saying that it would pump money into the economy and give those working full-time a better shot at making ends meet.

"If we increase the minimum wage to $10.10, you're going to see an infusion into the economy," he said.

Casteen said that the real fix to minimum wage was not a one-time hike but rather indexing it to the inflation so that pay for the state's lowest paid workers keeps pace with the cost of living.

"The minimum wage is more straw on the back of our small businesses," he said.

On the Affordable Care Act, what some people call "Obamacare," both Rouzer and Casteen said they opposed the law. Casteen cited a litany of health care problems, such as the recent Veterans Administration scandal and problems keeping tabs on Ebola patients, as evidence the federal government doesn't manage health care well.

"If anything, the federal government has proven itself completely incapable of socialized medicine," he said.

Rouzer said he favored scrapping the ACA in favor of reforms such as limiting lawsuits against doctors and "de-coupling" health insurance from employers.

"There is no way you can love your neighbor as you love yourself if you don't have access to affordable health care for the folks who need it most," he said.

Views on immigration separates the candidates

Asked about what the federal government should do on immigration, all three candidates differed from one another.

"I do not support a path to citizenship for anybody who has come here illegally," he said.

Rather, Rouzer said, he favors reforming the immigration system so that large employers and farmers could get the seasonal labor they needed but that allowed those workers to return to their countries of origin.

On the other end of the spectrum, Barfield said he backed a bipartisan measure that passed the U.S. Senate that would lay out a path to citizenship for those here illegally after those people met certain requirements, such as paying fines.

"We all came here in different ships," he said, "But we're in the same boat now."

Casteen sketched out a position that seemed midway between his two opponents. He was critical of the federal government's efforts to control the border and set up a sensible immigration system that allows those wishing to come her legally a clear path to do so.

While he did not favor allowing all who arrived her illegally to stay, he said that children who came here through no fault of their own should be granted a route to citizenship.

"Their home is the United States," he said.

The candidates did occasionally find common ground. Each, for example, pledged not to exacerbate partisan tensions in the nation's capital. But on substantive issues, the three men typically had different policy approaches, and none thought that imposing term limits in Congress was a realistic option. Among the other topics they spoke about:

I-95 tolls: Asked about the possibility of tolling Interstate 95 to pay for needed repairs, Rouzer said he absolutely opposed such a plan. The other two candidates were willing to consider it, but it wasn't a first choice for either of the men.

Student loans: Barfield said he would favor the federal government taking action to lower the interest rates paid on student loans. Rouzer said the best thing Congress could do for struggling students is "create an economy where they can get good paying jobs so they can pay their debt off." Casteen said that students needed to be counseled on handling money and making realistic choices about their careers and how much debt they can handle.

Education: Asked about how they would improve education, Barfield advocated for government helping to put more funding into the classroom. Rouzer and Casteen both advocated for less federal involvement. Casteen called the Common Core curriculum, a system of standards developed independently but endorsed by the federal government, "a joke." Rouzer said that he favored doing away with federal involvement in education entirely. "It would by my desire to dismantle much of the federal bureaucracy and return that money to the states," Rouzer said.