Thousands turn out for sixth City of Oaks Marathon 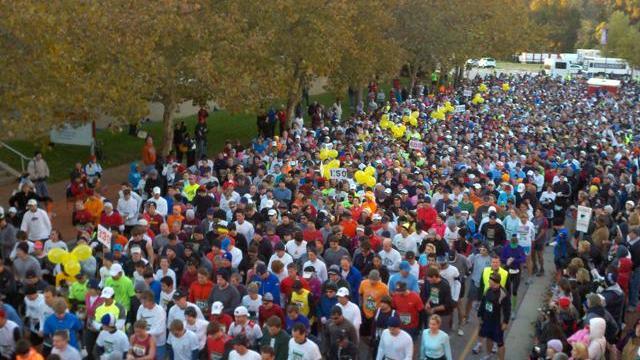 Raleigh, N.C. — A record number of runners took to the streets in Raleigh early Sunday to navigate cool temperatures and a new course in the sixth annual City of Oaks Marathon.

More than 5,000 runners registered for either the full marathon, the USA Track and Field Half Marathon and the News & Observer Old Reliable 10K, including several athletes who had signed up for the New York City Marathon, which was canceled by Mayor Michael Bloomberg Friday because of ongoing recovery efforts related to damage caused by Hurricane Sandy last week.

Ian Berry, a runner from Ireland who arrived in New York City Friday night, credited Google for his appearance in Sunday's race in Raleigh.

"We flew to New York Friday night to run the marathon, and we found out when we landed," he said. "We searched and searched for marathons we could get to and here we are. It was a great time. A lot of people, a lot of fun."

Berry said he will return to New York City on Monday to join thousands of other runners who have stayed to volunteer after the race was canceled. After seeing the impact Hurricane Sandy left on the northeast, Berry said it didn't take him long to get overt the disappointment of not running in one of the country's most famous road races.

"My sympathies are back with the people of New York and we'll be back there tomorrow," he said. "But today, we are celebrating all the great running here."

Local organizers opened about 100 slots to accommodate athletes who had planned to run in New York. Of the 5,447 registered runners, 4,155 people completed the marathon, marathon relay, half marathon and 10K races.

Runners began their day early, starting their respective races about 7:15 a.m. The course snaked down Hillsborough Street toward the State Capitol, back toward Cameron Village, Meredith College and PNC Arena before heading up the greenway toward Shelley Lake. Runners came back down the greenway to Hillsborough Street to finish at the Bell Tower at North Carolina State University.

Proceeds from the sixth edition of the race will benefit local chapters of the Leukemia & Lymphoma Society and the Rex Healthcare Foundation.