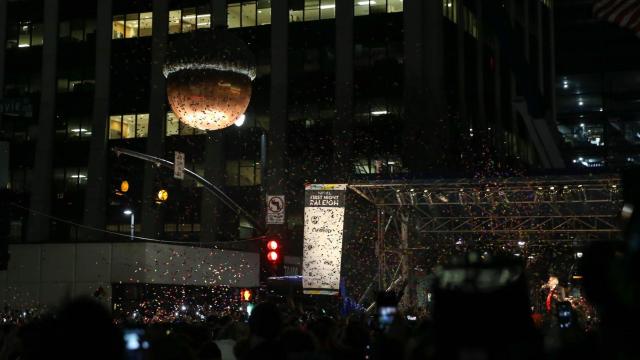 Raleigh, N.C. — With unusually warm weather, thousands of people crowded the streets of downtown Raleigh on Monday night to ring in 2019.

New attractions this year included a Pop-Up Glow Roller Skating Rink in City Plaza. The 4,800-square-foot rink included a soundtrack of classic disco music. With the rink in City Plaza, the Acorn Drop was moved up the street closer to the corner of East Davie and Fayetteville streets.

WRAL's Ken Smith, Kathryn Brown and Bryan Mims were on site helping ring in the new year, and Sanford native Britton Buchanan joined them for the festivities, including a duet with WRAL anchor Brad Johansen.

The rink wasn't the only new feature this year. The First Night Raleigh Globe, at Morgan and Fayetteville streets, got a makeover. It was designed and built by acclaimed sculptor Heath Satow more than 22 years ago.

In preparation for this year's event, noted neon artist Nate Sheaffer and his Glas Studio team refurbished the globe and added neon lights. Also new, the globe spun for the first time at First Night.

The Ferris wheel, pop-up wedding chapel, Jolly Raleigh Singing Trolley, sleigh rides, Art Pianos and "Next Year I Will" walls were also back this year.

See a map and schedule of events

WRAL First Night Raleigh kicked off at 2 p.m. with performances and activities in Bicentennial Plaza and inside the North Carolina Museums of History and Natural Sciences. Children could celebrate New Year's Eve around the world, do crafts and enjoy performances by the Dynamo Dogs stunt show.

At 6 p.m., the People's Procession kicked off at Martin Street. This parade was led by the Paperhand Puppet Intervention and included The Helping Hand Mission Band and the North Carolina State University Pipes and Drums.

The live music on the main stage got going around 9 p.m. Boulevards headlined the stage, starting at 10:30 p.m. and playing until midnight.