Thousands crowd Raleigh for annual Race for the Cure 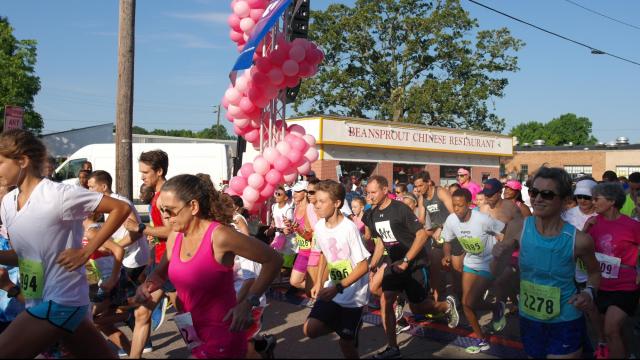 Raleigh, N.C. — Statistics show one in nine American women will be diagnosed with breast cancer in her lifetime. The disease is all too common but research over recent decades has improved both prevention and survival rates. In 1980, the five-year relative survival rate for women diagnosed with early stage breast cancer was about 74 percent. Today, that number is nearly 100 percent, according to the American Cancer Society.

Much of that research has been funded by the Susan G. Komen Foundation and the organization's popular Race for the Cure series.

More than 10,000 runners and their supporters lined the streets around Meredith College in Raleigh on Saturday for the annual North Carolina Triangle to the Coast edition of the 5K. Money raised from race registration fees and runner sponsors funds Komen's efforts in breast cancer education, providing breast cancer screening to underserved communities and treatment programs.

Shuttle buses ran all morning from PNC Arena to transfer runners to the start line on Hillsborough Street in front of the Meredith campus.

Competitive and recreational runners were grouped together in one race that stepped off at 8 a.m. With a sticky, warm Saturday in the forecast, organizers decided to couple the races rather than running them separately so that all runners can finish earlier in the day.

The event also features a Zumba warm-up, women's-only 5K, a one-mile fun run and a kids dash for ages 3 to 5. It wraps up with a survivor celebration at 10 a.m.

For a second year, WRAL and Komen are joining forces to share the photos and emotions of race day on the inspiration board in Race Village. Passers-by can see photos and comments shared on social media and add their own using hashtag #Komentri.