This Santa wears a baseball cap and delivers electric wheelchairs 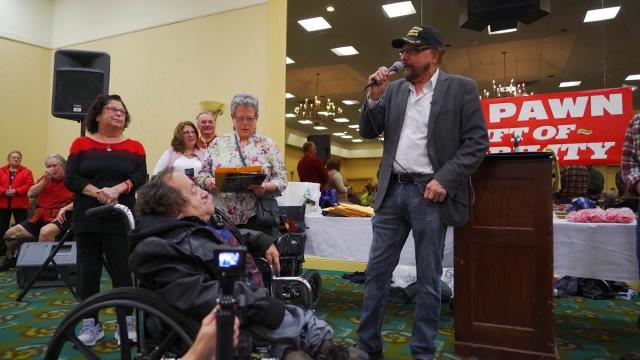 CNN — Amputee Robbie Drummer was homebound for more than eight years, but now she can reclaim her life with the gift of a motorized wheelchair.

"He's given me my freedom," she says referring to Phil Pavone. "He's like my family."

Pavone, a pawn shop owner in Norwich, Connecticut, has been giving away electric wheelchairs every holiday season since 2009.

With the help of several volunteers, he collects unwanted chairs and refurbishes them. So far, he has donated around 580.

How it all began

Nine years ago, Pavone had a few motorized wheelchairs in his shop that weren't selling. It was around the holiday season and he figured he would donate them. He put an ad in the local newspaper to see if anybody needed them.

"I told people to write in and tell me their story or what their disabilities are and I got 60 letters," the Vietnam veteran says. "Some of those people were so badly handicapped that I went on Craigslist and bought four more. And the first year I gave away six."

At that point, Pavone realized how much of a need there was and he had the means to help. Plus, he could relate to the frustration and helplessness some disabled people experience.

"A few years back I developed cancer and I was pretty sick. Chemotherapy, radiation, surgery. And it was the first time in my life that I had to depend on someone else," the 69 year-old remembers. "And it was very degrading. And you feel like you're worthless."

The gift of mobility

When Drummer hobbled up on her crutches to receive her wheelchair from Pavone, she was overcome with emotion. She lost her leg to diabetes after being in a coma for six months.

"I thought my life was finished," she says through tears.

Now she has plans to do everyday activities many able-bodied people may take for granted.

"You'll never understand how important it is to get around and be independent," Drummer says. "I am going to go to the park...I am going on job interviews with my chair...to go to the grocery store...to visit friends. I always wanted to go to the museums and now I can."

Pavone calls Robert Palmer up to get his wheelchair and jokes that he is "a maniac on wheels." The 54 year-old has a brittle bone disease called osteogenesis imperfecta and has received several chairs over the years.

Palmer is constantly on the move. He travels, does errands and takes walks with his wife. He equates the wheels on his chair to a pair of shoes.

"People own many, many shoes. And these are the only shoes I've got," he explains. "I need something that is durable."

He adds, "The wheelchair opens a door that would otherwise be closed."

Having that mobility impacts a bigger group of people than just recipients like Palmer.

"It has an effect upon their family," says volunteer and retired state police captain Bob O'Shaughnessy. "They can be independent individuals and then have not so much of a burden on the family."

He adds, "If you give people some freedom with these chairs, they may not need as much help from social services, so it actually reduces the burden on social services in the community."

New electric wheelchairs can cost thousands of dollars and may not be covered by insurance. Pavone can usually refurbish a chair for around $250 to $500—which is the cost of two batteries.

"The irony is there's thousands of these chairs out there that once people are done with them, they don't know what to do with them," he says. "And you have all these people that need them and you just don't have any program to put the two together."

Senator Cathy Osten of the Connecticut State Senate has been coming to Pavone's giveaways the past few years to see how she can help on her end.

"There are a lot of people that need services that do not get covered by insurances," she says. "And so this is a way for me to find out what can we change that would give them the policy to allow insurances to cover services such as this."

The Vietnam vet continues, "Myself and my colleagues in the General Assembly this year are looking to expand health care and this will be one of those things that I'll be looking to add in."

Pavone would love to see programs like his in every state, but recognizes it can be pricey to take on.

He created a GoFundMe campaign to help defray the costs so he can continue to help people like Drummer and Palmer.

"When asked if we're a non-profit, I laugh," smiles Pavone. "This is as non-profit as you can get because no one gets a salary. There's no money here. All my volunteers do it out of their heart. I do it out of my heart."