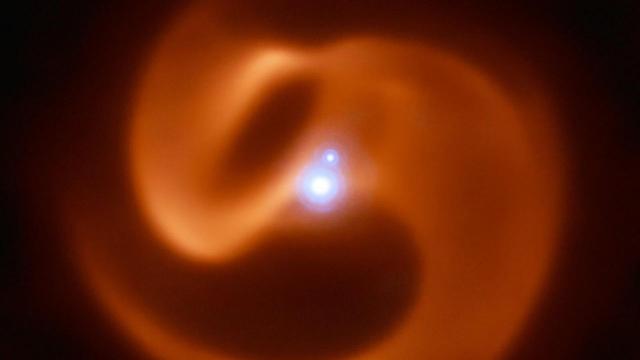 CNN — A rare star system has been found in our Milky Way galaxy, but it's doomed to end in a massive explosion.

The star system, which looks like a cosmic pinwheel, is located 8,000 light-years from Earth. But it's so rare that astronomers never expected to find a star system like this in our galaxy.

It's known as a Wolf-Rayet star system. Only some massive stars evolve into Wolf-Rayets as they approach the end of their lives. This stage lasts a few hundred thousand years, but in the lifetime of a star, that's very short, the astronomers said.

Only one out of a hundred million stars are massive enough to be Wolf-Rayets. And a binary pair of two stars like this is even more rare, which is what astronomers first discovered when they found the system in 2018.

Inside this system are two massive stars that orbit each other, as well as a single companion star bound to them by gravity. The companion star is also probably a Wolf-Rayet star that's shedding gas, helping create the intricate shape of the dust cloud.

The two stars are each about 10 to 15 times more massive than our sun, and both are more than 100,000 times more luminous. And compared to the surface temperature of the sun, which is about 9,941 degrees Fahrenheit, these stars reach a blistering heat of 45,032 degrees Fahrenheit -- or more.

Researchers named the system Apep after the serpentine Egyptian god of chaos. The star system was first detailed in a study published in November 2018 in the journal Nature.

Now, astronomers have learned more about this rare gem, including that the massive stars complete an orbit of each other about every 125 Earth years, and at a distance that is comparable to the size of our solar system.

The two stars release huge amounts of carbon dust, which whirls around in the screaming stellar winds created by the stars. The stars orbit each other, causing the dust to look like a dusky, glowing tail.

This spiral plume is one of a few ever discovered, the researchers said. They thought the name Apep was fitting because the dust plume looked like a serpent battling the central star.

These incredibly bright, hot stars are beautiful but doomed. The next step is usually a supernova explosion that results in the star becoming a black hole.

"Aside from the stunning image, the most remarkable thing about this star system is the way the expansion of its beautiful dust spiral left us totally stumped," Yinuo Han, lead study author, said in a statement. Han is an honors student in the School of Physics at the University of Sydney in Australia. "The dust seems to have a mind of its own, floating along much slower than the extreme stellar winds that should be driving it."

Han wrote the study while in lockdown due to the pandemic. The study published in the journal Monthly Notices of the Royal Astronomical Society on Sunday.

The researchers were able to use the high-resolution imaging capabilities at the European Southern Observatory's Very Large Telescope in Chile to study the system and analyze the process that created the spiral.

"The magnification required to produce the imagery was like seeing a chickpea on a table 50 kilometers (31 miles) away," Han said.

The astronomers were able to create a model that matched the structure of the spiral in the star system, which enabled them to understand the extreme forces creating it.

However, the dust spiral is expanding at a rate that is four times slower than the speeds of the stellar winds -- which differs from other Wolf-Rayet discoveries in the past.

"The speeds of the stellar winds produced are just mind-blowing," Han said. "They are spinning off the stars about 12 million kilometers an hour; that's 1 percent the speed of light." That's also 100,000 times faster than Earth's hurricanes.

"Yet the dust being produced by this system is expanding much more slowly, at about a quarter of the stellar wind speed," Han said.

The fast rotation of the stars is likely responsible for this, sending stellar winds in different directions and at varying speeds.

"The dust expansion we are measuring is driven by slower winds launched near the star's equator," he said.

This indicates, the researchers believe, that Apep may actually create a gamma-ray burst when it explodes.

"They are ticking time bombs," said Peter Tuthill in a statement, study coauthor and professor at the University of Sydney. "As well as exhibiting all the usual extreme behavior of Wolf-Rayets, Apep's main star looks to be rapidly rotating. This means it could have all the ingredients to detonate a long gamma-ray burst when it goes supernova."

That has never been observed in the Milky Way before, the researchers said.

Gamma-ray bursts are some of the most energetic events that occur in the universe. Luckily, this one won't impact Earth thanks to the star system's axis of rotation -- but if it did, the burst could strip Earth's ozone layer and expose our planet to all of the ultraviolet radiation streaming out from the sun.

"There has been a flurry of research into Wolf-Rayet star systems: these really are the peacocks of the stellar world," said Joe Callingham in a statement, study coauthor in postdoctoral position at Leiden University in the Netherlands. "Discoveries about these elegantly beautiful, but potentially dangerous objects, is causing a real buzz in astronomy."