This Is the Front Line of Saudi Arabia's Invisible War 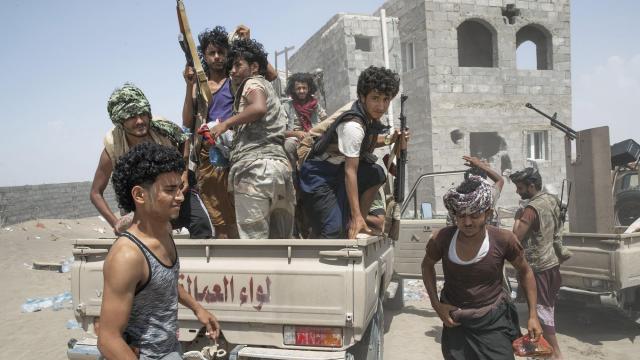 HODEIDA, Yemen — A battlewagon roars through the gates of a beach villa on Yemen’s Red Sea coast, a luxury property with a 20-foot chandelier and indoor pool, now repurposed as a busy field hospital. Young fighters, drenched in the sweat of the battle, leap from the pickup and hoist a wounded comrade, blood streaming down his face, into the emergency ward.

A piece of shrapnel had sliced his nose and lodged in his right eye. The fighter, a portly young man named Ibrahim Awad, groans. “Please, Hameed,” he calls to a fellow fighter, a glint of panic in his one good eye. “My head feels heavy.”

The Saudi-led war in Yemen has ground on for more than three years, killing thousands of civilians and creating what the United Nations calls the world’s worst humanitarian crisis. But it took the crisis over the killing of dissident Jamal Khashoggi in a Saudi consulate two weeks ago for the world to take notice.

Saudi Arabia’s brash young crown prince, Mohammed bin Salman, under scrutiny over the Khashoggi case, now faces a fresh reckoning for his ruthless prosecution of the war in Yemen — yet another foreign policy debacle for Saudi Arabia and a catastrophe for the Arab world’s poorest country.

Outside Yemen, the war has been largely overlooked.

The Saudis barred foreign journalists from northern Yemen, scene of the biggest airstrike atrocities and the deepest hunger. The conflict is mostly unknown to Americans, whose military has backed the Saudi-led coalition’s campaign with intelligence, bombs and refueling, leading to accusations of complicity in possible war crimes.

Since June, the war has centered on the Red Sea port of Hodeida. After a tense journey along a coastal highway prone to bombs and ambushes, we made a rare visit this month to the chaotic battlefield at the city gates. There we saw what Crown Prince Mohammed’s war looks like up close, from one side, among those Yemenis who are fighting and dying in it.

In 2015, the prince sent Saudi warplanes to bomb Houthi rebels who had seized control of northwestern Yemen and whom he saw as a proxy of Saudi Arabia’s regional rival, Iran.

Originally a movement of Shiite guerrillas from the mountainous northwest, the Houthis rose to power in the turmoil that followed the Arab Spring in 2011. After capturing the capital, Sanaa, in 2014, they soon controlled Yemen’s three largest cities. Iran aided their advance with supplies of military equipment, including missiles.

Since 2015, Saudi Arabia and the United Arab Emirates have led a military coalition in a war aimed at ousting the Houthis and restoring an internationally recognized government. But early promises of a swift victory have given way to a bloody stalemate, while the war has inflicted a catastrophic toll on Yemenis that includes widespread hunger and the worst cholera epidemic in history.

In Hodeida, the war has settled into a kind of desultory rhythm.

The fighting crests at dawn and dusk, when fighters on both sides rain mortar shells across the front line.

Within minutes, pickup trucks screech to a halt outside the field hospital, offloading wounded fighters — men smeared in dirt and blood, peppered with shrapnel or felled by a sniper’s bullet.

Yemeni medics established the field hospital at ad-Durayhimi, on the southern edge of Hodeida, in June, when they landed on the beach outside the villa as mortar shells landed around them, and waded ashore.

Now financed by the Emirati Red Crescent, the hospital has an air of quirky, controlled chaos. It has no restrictions on guns or drugs: Young fighters slinging Kalashnikovs crowd the emergency room, standing anxiously over medics working to save their wounded comrades.

Some nurses chew khat, the narcotic leaf beloved by Yemenis. At night, they gather in crowded dormitories to swap stories and gallows humor, and avoid enemy fire.

Just before we arrived, they said, a Houthi drone had exploded over their rooms. Dr. Hazza Abdullah, 34, the doctor on duty, told of going for a swim in the sea during a lull in the fighting, only to face a spiky sea mine floating toward him. “I got out very quickly,” he said.

In 2011, when the Arab Spring protests swept Yemen and other Arab countries, he embraced the promise of change.

“I thought it would be like the French Revolution, that it would open doors,” he said. “Instead we are going through hell.”

The battleground arcs across a sandy wasteland of deserted farmhouses on the southern edge of Hodeida, between the city’s land-mine-infested airport and a strategic junction called Kilo 16.

There, we saw pickups loaded with fighters racing through the desert, wheels spinning and engines revving, dodging sniper fire and enemy mortars. Closer to the front line, fighters in sarongs hunkered behind sandy berms or clustered under trees. Warplanes whizzed overhead. A pair of cows, caught in the crossfire, lay rotting in the dust.

We joined a group of jihadi fighters for lunch at their flophouse near the front line. Mortar tubes and discarded shell cases littered the ground. Inside, fighters scooped up handfuls of rice and chicken, led by a cheery commander with a large bandage on his forehead where he had been grazed by a sniper’s bullet.

Boxes of Russian anti-tank missiles, stacked in a corner, bore markings that identified their Emirati purchasers.

A fighter whipped out his phone.

“Look at this,” he said gleefully, playing a video of a missile curling toward five Houthi fighters gathered under a tree. The video ended when they vanished into a ball of fire.

Later, as darkness fell, the fighters returned to their positions.

In seeking to capture Hodeida’s port, the coalition hopes to deprive the Houthis of millions of dollars in monthly tax revenues and force them to the negotiating table. But Hodeida is also the gateway to a starving nation: Three-quarters of Yemen’s 28 million people rely on some form of relief aid, and the vast majority of it passes through the port.

Under intense international pressure, the coalition promised Western officials they would not fight in the city or the port, and would instead seek to encircle it. Now both sides are dug into positions on the city’s fringes, exchanging fire but gaining little territory.

A secondary front extends for about 80 miles to the south, parallel to the coalition-controlled coastal highway, where the fight takes place in remote villages and small towns, as both sides try to cut off each other’s supply lines.

The United Nations says this secondary front is the deadliest area for civilians. At least 500,000 people have fled their homes, many forced to shelter in squalid refugee camps in towns farther down the coast like Mokha, a small port once famous for its coffee exports, and nearby Khokha. Once a sleepy fishing town, Khokha buzzes with a lawless air, a melting pot of the war. Fighters mill about in the town center, chewing khat. The main drag is often jammed with military convoys headed for the front. Refugees, soldiers and Houthi spies mingle in the town bazaar.

Gunfire erupts at night, though usually it’s celebratory from weddings. The U.N. and most Western relief agencies have deemed the area too unsafe to serve. A notable exception is Doctors Without Borders, which recently opened a hospital in Mokha.

For most refugees, the main worry is their next meal. At the city dump in Mokha, Thabet Bagash rummaged for glass bottles and tin cans.

Before fighters ejected him from his home, he was a farmer. Now, he said, he was reduced to this. His face wrinkled with disdain. If he collected a bagful of cans, he might earn $1.40 — enough to feed his five children for a few days.

Just 80 miles from the garbage dump, two upstairs rooms at the field hospital might as well be on another planet. In one, the Emirati Red Crescent has installed a gleaming new operating theater, in the other a six-bed intensive care unit.

But the expensive and much needed medical equipment is pristine and untouched. The authorities couldn’t find medical staff — Yemeni or Emirati — to work there.

That seemed emblematic of the Emirati way of war. The United Arab Emirates pays wages for fighters, and equips them with rockets and million-dollar armored vehicles.

But Emirati generals direct the fight from the relative safety of Aden, the main city in southern Yemen, where the bulk of the estimated 5,000 Emirati soldiers in Yemen are based. Emirati warplanes and naval boats pummel targets in Hodeida from the air and sea.

But on the front line, Emirati and Saudi soldiers are hard to find. Coalition bases along the coastal highway are guarded by Sudanese recruits, many from Darfur.

At the field hospital, the dead and wounded we saw were Yemeni.

It was probably too late for Mohammed Kulaib by the time his friends rushed him to the hospital at 7:30 on a Sunday morning. The 20-year-old had been shot in the chest during a skirmish at Hodeida airport. After a brief attempt to resuscitate the fighter, a medic declared him dead.

Kulaib’s brother, Yahya, stood over the body in the emergency room. “The Houthis hit us suddenly,” he said. “The mortars were so intense, it was hard to even retrieve his body.” The brothers were part of the Tihama Resistance, whose fighters come from the coast — one of at least a dozen Yemeni militias, with widely divergent ideas, that fight under the coalition banner.

In a corner of the emergency room, when the medics were gone, Kulaib leaned over his dead brother. He kissed him on the forehead, pulled a gray blanket across his face, then gently tied a knot in his shroud.

The sight of long convoys, laden with troops and ammunition, as well as a sharp uptick in airstrikes, have stoked reports in recent weeks that the coalition is preparing to make a new push on Hodeida. But even if they capture the city, experts are skeptical it will turn the tide of the war.

Despite more than 18,000 coalition airstrikes since 2015, the front lines remain largely unchanged. Around Hodeida, the Houthis have seeded vast tracts of land with mines, on a scale second only to that of the Islamic State in Syria and Iraq, according to Conflict Armament Research.

U.N.-led efforts to broker a peace have repeatedly failed. Both sides feel they have more to gain from fighting, said Gregory Johnsen, a scholar on Yemen at the Arabia Foundation.

“Years of airstrikes failed to dislodge the Houthis, and their leaders now feel secure,” Johnsen said. “They think they can wait out the Saudis.”

In the meantime, a humanitarian catastrophe looms. A war-induced plunge in the value of Yemen’s currency last month has hastened a steep economic collapse. The U.N. humanitarian coordinator, Lise Grande, warns that 14 million Yemenis risk starvation in the coming months.

For Crown Prince Mohammed, the war ranks as a calamitous blunder, alongside the failed embargo he led against Qatar, the kidnapping of the Lebanese prime minister and now, as mounting evidence suggests, the officially sanctioned operation that led to the death of Khashoggi in Istanbul.

But for Yemenis, this is their home. The fight for Hodeida is shaping up to be the most destructive chapter of the war that has shattered their country.

More brothers will bury brothers, it seems likely, before it is over.