This Holstein’s Plea: ‘Stand Beside Me When You Measure My Size’ 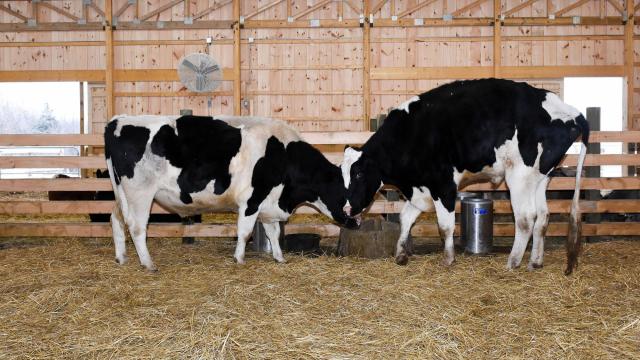 WATKINS GLEN, N.Y. — As I stood in the midst of enormous Holstein steers leisurely munching hay at a spanking new barn at Farm Sanctuary in upstate New York, I thought about Knickers, the already fading meme of bovine gigantism.

I was surrounded by Knickers knockoffs, or Knickers cousins, or at least other giant Holsteins. It reminded me of an old video game called “Diablo,” which had a secret cow level. In it, quickly multiplying bipedal Holsteins surrounded and killed your avatar.

That’s about as close as most of us get to Holsteins, which actually walk on all four legs and are very gentle. We all kind of know that, which is why the secret cow level was so weird and disturbing, and perhaps why Gary Larson put them in so many cartoons. That and the guilt so many people feel about their ignorance of the lives of the animals that end up on sesame seed buns.

Not only do we eat them, we know almost nothing about them, which no doubt has something to do with why we eat them. But we don’t even know how big they are anymore.

Enter Knickers. Now that his meme is waning, it seems that we should all reflect on the simple fact that most of us had no idea how big cattle actually are, how big Holsteins are, and certainly not even an inkling of how big Holstein steers are, and what they do for a living, while they are living.

The short answer is that they mostly don’t live past 15 months, because Holsteins are mostly dairy cows. There is no such thing as a dairy steer.

When they do live to maturity, around 4 years old, they get really, really, really big, like Knickers. He is 6-foot-4 at the shoulders and weighs about 3,000 pounds.

When I was invited to come to the shelter and put Knickers in some perspective, an old song by an old folk singer came to mind, and I heard David Bromberg’s twangy whine insisting, “Stand beside me when you measure my size.” So I did.

At the shelter here, I stood amid three steers, Orlando, Milbank and Lawrence, all of which reached about 6-foot-4 at the shoulder and weighed 3,000 pounds.

Sam, of similar size, was at another barn. And the other Holsteins in the barn, some of whose ears I scratched, were not more than a few inches shorter. What are they? Merely enormous?

Oh, and there was Tweed, at 6-foot-8. I actually drove to the shelter to see him, but he had some skeletal abnormalities so I wasn’t sure how to count him if we were judging for the record. But the point that Susie Coston, the national shelter director for Farm Sanctuary, wanted to make wasn’t that her cattle could beat out Knickers for some imaginary large animal gold medal.

The point, she said, was “that’s the norm.” We just don’t see them.

Or, as Tara Hess, who directs the shelter in Watkins Glen, said, “We don’t actually know what’s normal.”

Hess introduced me to the Holsteins and to Rory the pig and a few chickens, a tiny sampling of the cattle, goats, sheep, ducks, geese, chickens and turkeys that live here.

All of them are bigger than the animals raised for food, which are slaughtered young. Among the chickens at the shelter, for instance, is an 18-pound broiler, Hess said. Broilers are usually slaughtered around 8 weeks of age. This one, somehow, happened to grow up.

Standing next to the steers was, above all, disturbing. I thought of hamburgers past, as pretty much every nonvegetarian who visits must. And I thought of such vast animals being so inconsequential to the industry that bred them. And I thought about Gary Larson cartoons.

By the way, if you think Larson embellished on cow personality, or that cattle would never surround you as they did in “Diablo,” Hess said that the idea that cattle have no personality is completely wrong.

Not only are they all different — some like to be scratched, some like you to just back off — “They are fiercely loyal to each other.”

When one dies, she says, sometimes they won’t let you near the dead animal. They surround the corpse and bellow in what she said is mourning.

“They’ll even take out the veterinarian’s car,” she said.

And, in case you haven’t stood next to one recently, the Holsteins are really, really big.