They Were Stranded by Florence. Then the Cajun Navy Arrived. 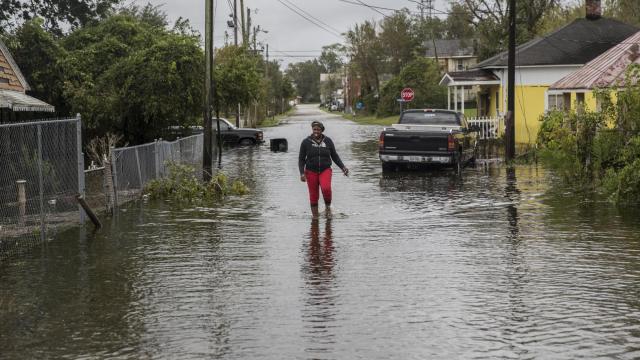 Get help, give help | Lives claimed by Florence

WILMINGTON, N.C. — Through dark, flooded streets, Leonard Harrison, a volunteer with the United Cajun Navy, guided a rescue boat searching for people stranded by the powerful storm Florence. Dozens of volunteers, many of whom arrived in trucks with boats in tow, watched the storm’s progress and rising waters, knowing they would soon receive calls for help.

The loosely organized assembly of weekend fishermen, shift workers, college students and others has come to the rescue before, in storms like Hurricane Katrina in 2005 and Hurricane Harvey last year. This time, the volunteers spread out across Florence’s path.

On Saturday night, a call came about a family in need of help in Wilmington.

A Cajun Navy crew headed out and they led the family through waist-high water. Harrison carried Dylan Roberts, 2, to a waiting boat.

As water swelled in a neighborhood nearby, Harrison, who owns a credit card processing business, and Brett Neely, an emergency medical technician, waded through a flooded street, calling out into the night to see if anyone needed help.

Halfway down the block, a woman called to them.

As water lapped at her front door, they told the woman what they told everyone they met that night: The waters were still swelling and they could bring her to safety. They helped her gather some belongings, put her cats in crates and led her to their boat.

By dawn, the volunteers had helped carry more than 155 people out of their homes in this area, delivering many to shelters, in a single night.