They’ve Made Lots of Bubble Tea and Now They’ll Make the Pearls, Too 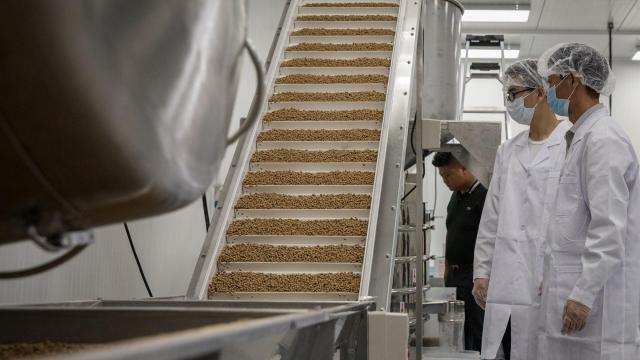 The partners behind Boba Guys, a chain of bubble-tea cafes, already made their own infusions and syrups to go with the tea leaves they imported from China, Taiwan and Japan. A few years ago, they got to thinking, why not make the pleasingly chewy tapioca pearls from scratch, too?

It turned out that the industrial machinery used by factories in Taiwan, which produce most of the tapioca pearls for bubble tea, also known as boba, was expensive. And the two Boba founders, Andrew Chau and Bin Chen, didn’t have a large enough demand for the product to justify the investment.

But now the company, which started as a Bay Area pop-up in 2011, has 12 locations all over the country and plans to add three more by the end of 2018. This year, Chau and Chen finally opened their dream factory, US Boba Company, in Hayward, California. The 18,000-square-foot tapioca-pearl plant, a former pasta factory, is a joint business venture with David Fan of Fanale Drinks, a bubble-tea supplier.

The new, California-made pearls have been bobbing in cups of milk tea in Bay Area stores since August, and before the end of the year, they will be in all of Chau and Chen’s shops, as well as eight locations of Teaspoon, Fan’s bubble-tea chain.

Learning the pearl-making technique has involved several months of trial and error because the method is so guarded by companies in Taiwan. “It’s a very delicate process and it takes a lot of patience,” Fan said. Here are the steps:

The factory imports tapioca starch, a powder made from the cassava plant root, from Thailand. Workers combine it in an industrial mixer with brown sugar syrup, water, potassium sorbate and guar gum, to produce a damp, caramel-colored powder.

This powder, the base for the tapioca pearl, is transferred to a machine, where a worker mists it lightly with water. The powder spins around, continuously moistened and scraped to encourage the formation of small starter beads. Too much water, and the starch clumps. Too little, and the beads won’t form.

Another machine rolls the beads around faster with more water as a worker gradually adds more of the mixed tapioca starch. The beads grow like cartoon snowballs racing down a hill.

When the pearls are big, they are carried along a conveyor belt to a filter. US Boba Company looks for pearls that are about 9.5 to 10.5 millimeters wide. Smaller pearls are returned to the tumbler to grow. Larger pearls are broken down into powder to start the process again.

Fan says the company is still tweaking the technique for efficiency, and to achieve an ideal — and uniform — texture and size. It’s also experimenting with new flavors for the American market, like pale green matcha pearls made with uji matcha from Japan.

Once at the bubble-tea shops, the pearls are cooked in boiling water and then steamed. If they’re well made, Fan said, they are smooth, spherical and evenly tender all the way through, but not squishy. They also have to be exactly the right size, so they can rush up a straw without getting stuck. Chau estimates that the Boba Guys shops use about 2 million straws a year. He has researched straw materials, sizes and shapes, in preparation for a ban on single-use plastic straws that goes into effect in San Francisco next July.

“In my office, I literally have a museum of straws,” Chau said, “I could write a history of straws.”

Before the ban arrives, the company plans to switch from plastic to compostable straws made of paper and sugar cane for its California locations. That would be a challenge for any company, but for a bubble-tea shop, it also means recalibrating the size of the tapioca pearls.

In January, Chau, Chen and Fan will present their American-made tapioca pearls at the Fancy Food Show in San Francisco. Though the US Boba Company has only a few employees, Chau says it will scale up as production increases — and he is counting on production increasing.

As he points out, bubble tea isn’t a novelty. The drink, which was invented in the 1980s and first gained popularity in Taiwan, is internationally beloved, with many millions of drinkers worldwide, and an essential part of social life for many Americans.

Still, many are unfamiliar with the drink. So Chau says the new factory will eventually offer tours, with the goal of demystifying bubble tea.

Fan, who has been drinking bubble tea since he was about 10, said he hoped boba could one day follow the route of pizza — an immigrant food that, over time, became distinctly American.

“That’s why we want to make the whole process transparent,” he said. “People are only afraid of things they don’t know.”