They Thought Hemophilia Was a ‘Lifelong Thing.’ They May Be Wrong. 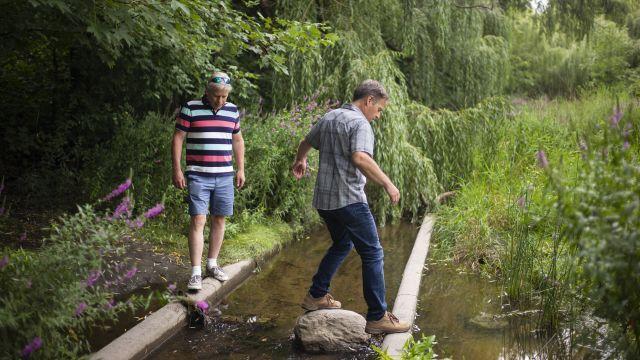 Scientists are edging closer to defeating a longtime enemy of human health: hemophilia, the inability to form blood clots.

After trying for decades to develop a gene therapy to treat this disease, researchers are starting to succeed. In recent experiments, brief intravenous infusions of powerful new treatments have rid patients — for now, at least — of a condition that has shadowed them all their lives.

There have been setbacks — years of failed clinical trials and dashed hopes. Just this past week, a biotech company reported that gene therapy mostly stopped working in two of 12 patients in one trial.

But the general trajectory has been forward, and new treatments are expected by many experts to be approved in a few years.

No one is saying yet that hemophilia will be cured. Gene therapy — which uses a virus to deliver a new gene to cells — can only be used once. If it stops working, the patients lose the benefits.

For now, “we are anticipating that this is a once-in-a-lifetime treatment,” said Dr. Steven Pipe, director of the hemophilia and coagulation disorders program at the University of Michigan and a lead investigator of a clinical trial conducted by the biotech company BioMarin.

The successful treatments are so recent it is hard to say how long they will last. But for the few patients who have been through the clinical trials successfully, life after treatment is so different that it’s something of a shock.

There are 20,000 hemophilia patients in the United States who lack one of two proteins needed for blood to clot. It’s a genetic condition, and the gene for blood clotting sits on the X chromosome. Virtually all people with hemophilia are men.

Those most severely affected must inject themselves every couple of days with the missing proteins, clotting factor VIII or factor IX. The shots keep hemophiliacs alive, but levels of clotting proteins drop between injections.

Even with regular injections, people with hemophilia risk uncontrolled bleeding into a muscle or joint, or even the brain. They must be extremely careful. Once bleeding begins, a joint may bulge as the joint space fills with blood. When the bleeding stops, the joint may be damaged.

Even a routine flight is risky, said Mark Skinner, a 57-year-old attorney in Washington with hemophilia who is a past president of the World Federation of Hemophilia.

“Carrying luggage around, you can twist the wrong way and immediately trigger a bleed,” he said. “Or you can get hit with a cart going down the aisle.”

People with hemophilia often are taught as children to avoid most sports and to find professions that will not require much physical activity. Many move to cities to gain easier access to treatment.

They may change jobs to get insurance needed to cover medical bills for hospitalizations and surgeries that can reach $1 million a year, plus an average $250,000 to $300,000 a year for the clotting proteins. (The shots alone can cost as much as $1 million per year.)

Despite their vigilance, most with severe disease eventually develop permanent joint damage from bleeds, often leading to surgery for ankle fusion or hip or knee replacements at an early age. Most live with chronic pain from past bleeds. For older patients, there is an additional complication. The clotting proteins used in the 1980s were contaminated with HIV and hepatitis C. Nearly everyone with hemophilia got infected.

Now, though, researchers see the start of a new era.

“It’s a really optimistic time,” said Dr. Lindsey A. George, a hematologist at the Children’s Hospital of Philadelphia and a principal investigator for Spark Therapeutics, one of several companies developing gene therapies for hemophilia.

Although the symptoms are the same with both forms of the disease, hemophilia A is by far the most common.

Results from the two companies’ preliminary trials were not perfect.

Patients in Biomarin’s hemophilia A trial got, on average, normal or above normal levels of factor VIII in their blood, but in the second year, those levels dropped to a median of 46 percent. It’s not clear why.

Patients in Spark’s hemophilia B trial only reached on average 35 percent of normal blood levels of factor IX. But those levels have remained steady for the two years they have been followed.

The good news is that those levels are sufficient for blood to clot, because normal levels are more than people need. After dreaming of a cure for decades, some treated patients are trying to adjust to newfound freedom.

He spent his childhood yearning to be active like other kids. But bleeds into his joints put him on crutches for days at a time or forced him to keep his arm in a sling.

He would be out of school for a week, then back, then out again with yet another bleed. He was embarrassed by nosebleeds that would not stop.

As an adult, he had to have his damaged ankle bones fused. His elbow, after numerous bleeds over the years, gives him chronic pain.

Foreseeing more pain and injuries in the years to come, Brissette began seeking out gene therapy clinical trials. Eventually, he enrolled in a Spark trial. (The company has an experimental hemophilia A drug, too.)

He received a single infusion on April 19. His blood levels of factor VIII rose from zero to as high as 30 percent of normal and so far have stayed there.

He has not given himself a shot of clotting factor since the procedure.

But he is still struggling to let go of a lifetime of wariness. As he tries to do work around the house or run around with his children, he is unable to shake the dread that he will bleed.

Normal blood levels of clotting proteins range widely, from 50 percent to 150 percent of average. A gene therapy for the disease would not have to provide much to be effective for patients.

And researchers knew just which genes to insert into patients’ liver cells. The genes for hemophilia A and B were isolated in the early 1980s.

But the research proved difficult, and the first positive result was reported just a decade ago by scientists at University College London. They treated 10 patients with hemophilia B and managed to increase their blood levels of factor IX to between 2 and 6 percent of normal.

In those patients, clotting proteins have persisted at those levels since.

Then scientists stumbled upon an unexpected bonanza. They found a man in Padua, Italy, who had a genetic mutation that made cells churn out as much as 12 times the usual amounts of factor IX.

The advantage was that they would not have to use so much virus — and the lower the dose, the less likely the immune system would attack. “We dropped the dose fourfold,” said Dr. Kathy High, a hematologist who is president of Spark.

“Our first patient was a 23-year-old nurse. His level of factor IX rose to around 30 percent and has remained there for two years,” she said. The nurse has not needed to inject factor IX and has had no bleeds, she added.

But hemophilia A has been more daunting.

The viruses used to carry modified genes into patient cells are called adeno-associated viruses. They cannot carry a large gene, and the gene for factor VIII, needed to treat hemophilia A, is enormous.

After 15 years of effort, investigators finally discovered they could reduce the gene to a manageable size by slicing out portions that turned out not to be needed.

No longer are scientists and patients dazzled by a treatment that raises blood clotting factor levels merely to 6 percent of average. “My thinking has evolved,” said Skinner of the World Hemophilia Foundation.

The results that companies are reporting now “really seemed unimaginable” just a few years ago, he added. — ‘On High Alert’

Bill Konduros, 59, owner of a machine shop who lives in Mississauga, Ontario, and his brother, Jay Konduros, 54, a baker in Cambridge, Ontario, had assumed that constant vigilance and increasing disability was their lot in life.

Hemophilia would be “a lifelong thing,” said Jay Konduros. Then the brothers joined Spark’s gene therapy trial for hemophilia B.

The actual infusion of the experimental drug was anticlimactic, Jay Konduros recalled. He walked into a hospital in Philadelphia, sat in a chair and had an intravenous drip for half an hour. That was it.

Now levels of factor IX in Jay Konduros’ blood are at about 50 percent. Bill Konduros, who also joined the trial, has levels closer to 75 percent. Neither has required any factor IX since their gene therapy.

Both struggle to accept the fact that, for the moment, their lives are very different.

“When I hit myself or strain a muscle or twist, I immediately revert to thinking like a hemophiliac,” Bill Konduros said. “You go on high alert. Is the ache spreading? Is it throbbing?”

One day in May, Jay Konduros fell, landing on his forearms. Both wrists hit hard on concrete, and he struck the left side of his thigh, already damaged from previous bleeds.

He worried, anticipating disaster. That night he stretched. He examined himself. Nothing seemed damaged. He woke up in the wee hours of the morning and nervously examined himself again.

He was fine. He waited three days to call his brother and tell him: He was now a normal person who had a minor fall.

“You hear a lot of things described as miracles or miraculous,” Bill Konduros said. “I guess I would say this truly is.”