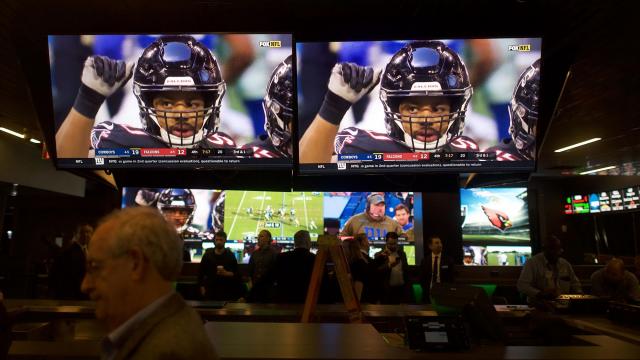 ATLANTIC CITY, N.J. — Kevin Duffey and his small team spend most of their days in a cramped, windowless bunker tucked off a third-floor hallway at the Resorts Casino. As the casino’s director of surveillance, , Duffey keeps watch over the vast gambling operation through 29 high-definition video screens along the walls that process images from more than 1,000 cameras anchored throughout the building.

Three flights below, a group of bettors mingled around a kiosk in a gleaming sports book operated by DraftKings, a sports gaming company. A camera directly above the kiosk projected the group’s last-minute betting debate to Duffey’s monitors upstairs.

A scar on one of the men’s eyebrows, visible from under his hooded sweatshirt, was captured by one of the high-resolution cameras that are built into every ticketing window and kiosk here.

“We’re watching behind the scenes,” said David Rebuck, director of the New Jersey Division of Gaming Enforcement, who was also in the room with Duffey.

“He thinks he’s anonymous. But he’s not anonymous.”

As sports betting has boomed from a niche hobby to big business in New Jersey, so too has the high-stakes battle to protect the integrity of professional and collegiate games — and the betting systems themselves.

With more than $600 million wagered since sports betting became legal in June, operators have begun using a range of policing and data-gathering methods to ferret out would-be swindlers. There are surveillance rooms at casinos, data-collection houses and betting-floor security — intimidating, earpiece-wearing employees that roam about, armed with a surprising amount of personal information about customers.

“It’s not just the video walls and the TVs and the slot machines that are down there,” Duffey said, referring to the casino floor. “We put a lot of money into the surveillance system.”

The main deterrents against the range of potential illegal behavior — money laundering, match-fixing and people from outside New Jersey trying to place bets — boil down to intense monitoring and background checks.

Online betting operators arm themselves with an abundance of data, like birthdays and Social Security numbers, which gamblers are required to provide and are then checked against criminal and other databases.

Though each sports betting operation is responsible for its own surveillance and security, many venues share information.

David Briggs, the chief executive of GeoComply, a company that works with DraftKings, listed all the personal data his firm collects from gamblers before a legal bet can be processed.

“If anyone was ever to engage in any type of nefarious activity, this would be the worst place to do it,” Briggs said. “Because we got you.” When the U.S. Supreme Court legalized sports betting this summer, officials from professional sports leagues worried about protecting the integrity of the competitions. With an exponential growth in betting, the thinking went, a surge in criminality might follow.

To be sure, problems do arise. Rebuck recalled signs of match-fixing this summer at the Wimbledon tennis tournament and subsequent concerns about the same thing occurring at the U.S. Open in New York.

“Thankfully, no bets were made on that doubles match in Wimbledon in New Jersey,” Rebuck said. “But it’s only a matter of time. There will be bad acts, and we’ve got to be ready to combat them.”

Rebuck and others often begin preparing long before a bet is placed.

When a user, for example, moves to create a new sports betting account on the DraftKings mobile app and inputs personal information, the screen takes slightly longer to load than typical apps.

In the six or so seconds it takes for the next screen to pixelate on a smartphone, DraftKings has run the user’s name, address, date of birth and Social Security number against numerous databases to authenticate identity. It then checks that identity against criminal and gambling-addiction databases, while also verifying that the account is being created in New Jersey.

For in-person bets, the security protocol is slightly different, as identifiable personal information is not immediately required.

“If you come up to a kiosk and want to bet $100 on the Cowboys game, you can do it anonymously,” Rebuck said. “But you still have your photograph being captured by surveillance. And there are other tracking mechanisms going on to make sure that you’re not just funneling money — $100, $100, $100 and so on — ‘structuring’ is what they call it in the criminal world.”

Each of Atlantic City’s casinos maintains its own list of people banned from gambling for violating gaming rules, but the houses also share that information.

“If I see all of the sudden a lot of money going in on a minor college basketball game, like Ball State, we monitor that also,” said Hal Tendler, the sports book manager at Resorts Casino. The elaborate security systems provide the constant watchful eye necessary to safeguard the sports themselves.

“The betting integrity is preserved when you can identify suspicious wagers. You can identify unusual betting patterns, and then seeing that, you can help protect the integrity of the sport if there is match-fixing or some other vulnerability,” said Jennifer Roberts, the associate director at the international center for gaming regulation at the University of Nevada, Las Vegas.

Still, the most common type of illegal betting activity involves users in states where betting is still illegal, like New York, trying to bet in New Jersey through mobile apps. More than 70 percent of online sports bets in New Jersey take place within 10 miles of the state’s borders.

To show just how concentrated bets were on the periphery of New York City, DraftKings offered a live look at its bet-tracking map on a Sunday when professional football games were being played.

The west bank of the Hudson River in New Jersey was a cascade of blue dots (accepted bets), with dozens of new dots appearing every second, while red dots (rejected bets) were sprinkled throughout New York City’s five boroughs.

At one point a red dot began to appear repeatedly near the eastern end of the George Washington Bridge, the Hudson River crossing between New Jersey and New York. It continued slowly inching west until it turned blue.

The bet had apparently been delayed by traffic — car traffic. A tactic known as geo-spoofing is perhaps the biggest threat to ensuring that bets are placed legally from within New Jersey. It involves users who download a smartphone app to provide a fake location, so someone in California could trick sports betting operators into believing their phone was in New Jersey.

In the year before sports betting was legalized, there was a proliferation of location-concealing apps, particularly among gamers playing Pokemon Go. Those responsible for making sure sports betting stayed clean took notice.

“It turns out that they didn’t want to get off the sofa to collect all the Pokemon monsters,” Briggs said of geo-spoofing. “They could just download an app and they could be anywhere, all from the comfort of their own sofa.”

He added: “We had to recognize this increase in location-faking methods, add it into our system. We monitor, we track it and we have to stay ahead of the curve.”