Government scientists had predicted an unusually busy hurricane season this year. But the number of named storms exceeded even the initial forecasts issued by the National Hurricane Center, and forced the National Weather Service to resort to using the Greek alphabet after Tropical Storm Wilfred formed in the eastern Atlantic Ocean in September.

The Weather Service had not done that since 2005, when 28 storms grew strong enough to have names. (The National Hurricane Center named 27 storms that year and later identified a 28th qualifying storm: a subtropical storm that formed briefly in October 2005 near the Azores, a remote archipelago in the Atlantic Ocean.) 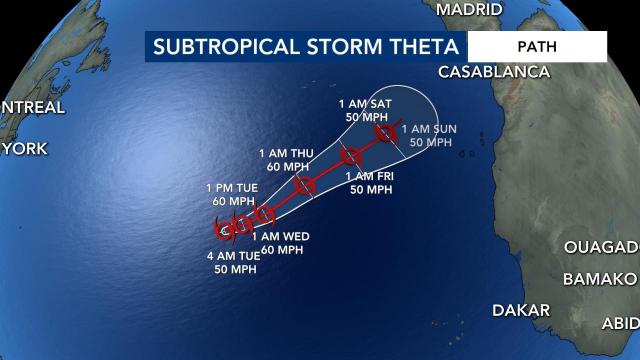 Theta was about 995 miles southwest of the Azores in the northeast Atlantic on Monday night and producing maximum sustained winds of 50 mph, according to the National Hurricane Center.

The storm was moving easterly at about 15 mph. There were no coastal watches or warnings in effect. Subtropical storms share some characteristics with tropical storms, but, according to the Hurricane Center, “are generally cold-core in the upper troposphere, often being associated with an upper-level low or trough.” Their maximum winds are usually recorded more than 60 nautical miles from the storm’s center.

The National Oceanic and Atmospheric Administration predicted in May that as many as 19 named storms would form this year. Four months later, the agency updated its outlook and predicted up to 25 named storms for the hurricane season, which started June 1 and ends Nov. 30.

“This year has been super active,” said Phil Klotzbach, a research scientist in the department of atmospheric science at Colorado State University. “We’ve seen a tremendous amount of storms.”

Still, scientists cautioned against reading too much into the milestone.

The increased frequency of tropical storms and hurricanes, they said, is not a result of climate change, though climate change can produce more ferocious storms and has led to a rise in sea levels, which can amplify the devastation from flooding and storm surge.

Instead, scientists pointed to other factors that led to the high number of storms: warmer-than-average sea surface temperatures in the tropical Atlantic Ocean and Caribbean Sea, a strong African monsoon season, and reduced wind shear, which means less wind variability at different altitudes that can disrupt storm formation.

What is driving some of those factors, scientists say, is a phenomenon that has led to increased hurricane activity, in general, for more than two decades: long-term cyclic variability in sea-surface temperatures in the North Atlantic. This is known as the Atlantic Multidecadal Oscillation, and it has been in a warm phase since the mid-1990s.

In terms of the intensity, duration and frequency of storms, 2020 does not match the record set in 2005, when eight hurricanes were classified as Category 3 or higher. Three of those hurricanes reached Category 5, a number NOAA described as “unprecedented.” One of those storms, Hurricane Katrina, had weakened to Category 3 status by the time it slammed into the Gulf Coast, devastating much of New Orleans and killing more than 1,500 people.

This year, two hurricanes — Laura and Delta — reached Category 4 status before landing in Louisiana and Texas, where they caused tremendous destruction. So far this year there have been no Category 5 hurricanes. “If you just look at the number of storms, it gives you a skewed view of how active it’s been,” Klotzbach said, referring to the 2020 season.

And in all of the breathless discussion over the record, another important factor has often been overlooked. Technology has significantly improved the ability of hurricane scientists to detect short-lived, weak tropical storms that in the past would not have been identified and given names, said Christopher Landsea, chief of the tropical analysis and forecast branch at the National Hurricane Center.

“When one wants to do a fair comparison of storms now versus storms in the past, you really have to be careful about how to interpret the raw number,” he said. “There has been a lot of hype about the record number of storms and, yes, it’s been a busy year. There have been horrific impacts. But is this really a record? The answer is no.”

In some areas, the destruction from the hurricane season has been devastating.

Five named storms struck Louisiana this year, breaking the record of four that was set in 2002, according to Klotzbach.

Hurricane Laura, which hit the southwest corner of the state in September with 150 mph winds, was one of the most powerful storms on record to make landfall in Louisiana. Six weeks later, Hurricane Delta weakened to a Category 2 by the time it reached land, but still battered towns that were still trying to recover from Laura.

In Westlake, Louisiana, a town of about 5,000 people near Lake Charles, Laura’s winds blew off roofs, caused a wall to cave in at City Hall, and snapped 20-foot-tall pines in half, said Robert Hardey, the mayor. Then came Delta.

Hardey said he expected it would cost $6 million, nearly half the town’s budget, to clean up the fallen trees and debris left by both storms. He said the federal government told him it would cover 75% of the cost, but the town needs more funds or it will go into serious long-term debt.

“I can’t take that hit,” Hardey said. The high frequency of storms this year should remind residents and communities in hurricane-prone areas to continue to adapt, as climate change threatens to increase the damage from such storms, said Gary W. Yohe, the Huffington Foundation professor of economics and environmental studies at Wesleyan University.

Rather than rebuild a mall that flooded in a hurricane, for example, a town should consider building a park that can better absorb water from future storms, he said.

“Before you knee-jerk rebuild where you are, think about it for a little bit,” Yohe said. “We don’t know where the next one is going to go, but I know there is going to be a next one. And there is a tendency that they’re getting worse.”