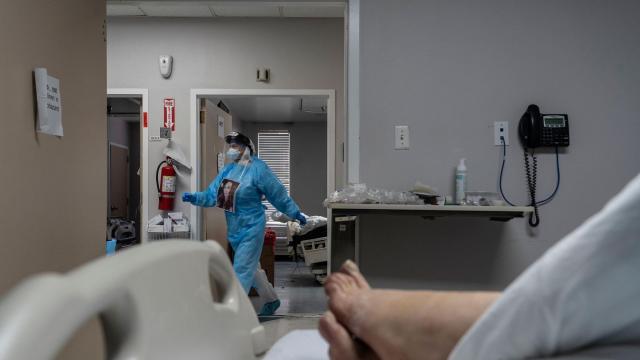 CNN — Official Covid-19 cases and hospitalizations in the United States are piling up at record rates -- and daily deaths, experts fear, may soon follow.

The following charts show how the fall coronavirus wave has put the US on unprecedented ground by some metrics, and with numbers trending up, point to how the situation could get worse while the country awaits a vaccine and distribution of new treatments.

Daily cases were dipping as recently as September, as the nation was bouncing back from a summer surge.

But infections roared back in a way not recorded before.

And it's well above the summer's highest seven-day average, which was around 67,100 on July 22.

There has been good news recently: A vaccine candidate was reportedly found to be more than 90% effective, and the US Health and Human Services secretary said vaccines could be widely available in the second quarter of 2021. And the Food and Drug Administration this week approved a new antibody treatment that may lower the risk that patients with mild to moderate disease will be hospitalized.

But with colder weather potentially driving risky gatherings indoors, and no vaccine available this minute, experts warn daily infections have room to grow.

"It will not surprise me if in the next weeks we see over 200,000 new cases a day," Michael Osterholm, director of the Center for Infectious Disease Research and Policy at the University of Minnesota, told CNN on Monday.

We should stress that the chart captures reported cases. Studies have estimated infections were vastly undercounted, especially early in the pandemic, partly because of limited test availability.

Some health experts have said hospitalizations can be a truer measure of the pandemic's severity -- though rising cases are a warning sign, since a patient's hospitalization can come well after diagnosis.

'Most sensitive indicator' of infections is up

A test positivity rate is the percentage of people who get tested and turn out to be infected. And the US rate has been shooting up in recent weeks.

The country's test positivity rate averaged 8.7% over seven days as of early Thursday, according to the COVID Tracking Project.

That's above a summer's highest seven-day average of about 7.9% in mid-July.

The World Health Organization in May advised governments not to reopen until test positivity rates were 5% or lower for at least 14 days.

And the director of the US Centers for Disease Control and Prevention, Dr. Robert Redfield, has suggested that communities' positivity rates should be below 5% to comfortably have schools open.

White House coronavirus task force coordinator Dr. Deborah Birx has said test positivity rate is the statistic she watches the closest, because it is "the most sensitive indicator" of how the coronavirus situation is unfolding at any particular time and place.

Hospitals have more Covid patients than ever

More Covid-19 patients are reported to be in US hospitals now than at any previous point in the pandemic.

About 65,300 coronavirus patients were in those facilities Wednesday, according to the COVID Tracking Project.

That's more than double the number from September 20, when the country was at post-summer-surge low of 28,608.

"The new hospitalization record underscores that we've entered the worst period for the pandemic since the original outbreak in the Northeast," two COVID Tracking Project co-founders wrote in an online post Wednesday.

These hospitalization numbers prove that the current surge of Covid-19 cases is not merely the result of increased screening of asymptomatic people. Rather, the cases we're detecting are a leading indicator that many people are seriously ill," the post reads.

Some hospital systems have said in recent days they are close to being overwhelmed.

The toll of lives lost is climbing, too

The country's recent daily Covid-19 death tallies aren't in record territory, but they are shooting upward.

The average number of deaths per day, across a week, rose above 1,000 this week for the first time since the summer.

That average was 1,034 on Wednesday -- the highest since August 10, Johns Hopkins data shows. More than 1,380 deaths were reported on Wednesday alone.

The University of Washington's Institute for Health Metrics and Evaluation projects the US could average more than 1,650 deaths per day by December 1, and more than 2,200 daily by January 1, if government leaders kept current social distancing mandates and even added some.

That would recall the tallies seen early in the pandemic, when 2,000+ deaths were reported daily for a time in April. The highest daily average across a week was 2,241, on April 24.

Infections appear to be killing fewer people on average now than early in the pandemic, in part, experts say, because of changes in the way the disease is treated and a rise in the proportion of younger people becoming infected.

"The ratio of hospitalizations to deaths has fallen tremendously since the spring," the COVID Tracking Project's post from Wednesday reads. "But it is also true that wherever we see hospitalizations go up, deaths rise two to three weeks later."