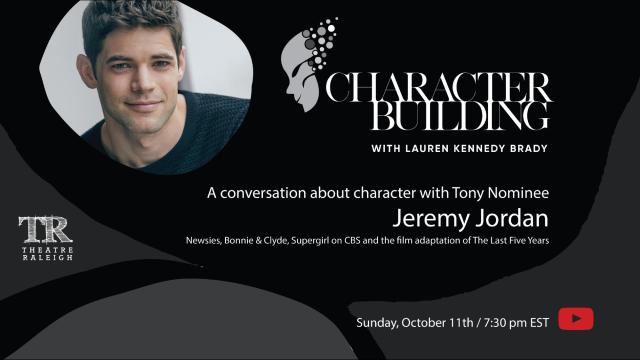 Theatre Raleigh, which has been offering up a bunch of virtual theater experiences in the past several months, is planning two that are all about building character.

The monthly show called Character Building will explore how Broadway stars became who they are and how they create memorable characters on stage.

“The name of the show Character Building is a play on the theatrical term ‘character' and what goes into the creation, while nodding to how all artists certainly deal with the slings and arrows of show business and how that ‘builds character’ in another way.”  says Lauren Kennedy Brady, Theatre Raleigh producing artistic director, in a press release “This online show is geared toward education and the understanding of what goes into the artist’s process.”

The first takes place at 7:30 p.m., Oct. 11, and will feature Tony nominee Jeremy Jordan. Jordan was nominated for a Tony in 2012 for his performance of Jack Kelly, the lead role in Newsies.

The second is set for Nov. 15 and will feature Ariana DeBose, who also is a Tony nominee. A North Carolina native, DeBose was nominated for her work in "Summer: The Donna Summer Musical" in 2018. She was also in the original cast of "Hamilton," playing the role of the Bullet, and you can see her in the film version of the show, which is on Disney+.

During the sessions, Brady will talk with the star for 45 minutes before opening the floor to virtual participants who can ask their own questions.

To participate in the Oct. 11 session, head over to Theatre Raleigh's YouTube page at 7:30 p.m., Oct. 11. It's free, but Theatre Raleigh is encouraging donations of $10.