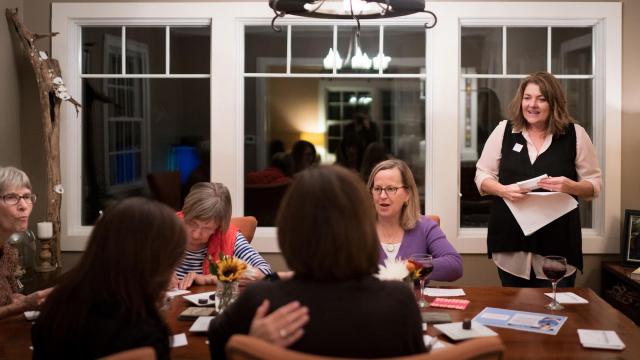 BETHLEHEM, Pa. — The Facebook album Joni Novotnak titled “Life Since Trump” could be the diary of so many American women.

November 2016: gathered with neighborhood women — several, like her, Republicans devastated by President Donald Trump’s election — for “vino and venting.” Contested the vote in her town, which Trump had won. Began weekly calls to her representatives.

January 2017: went to the Women’s March and formed the Fogelsville Huddle with three neighbors. Phone-banked for Planned Parenthood. “Had to go to counseling.”

February included a town hall-style meeting against Republican efforts to dismantle the Affordable Care Act and a letter-writing campaign to protest the president’s travel ban. And by earlier this year, the women had written postcards supporting the redistricting of Pennsylvania’s congressional map, attended debates and begun volunteering for the winner of the Democratic primary for Congress, Susan Wild, phone-banking for her three times a week. Throughout, they have marched: for science and for the climate; against gun violence and families being separated at the border.

“I never knew I had so many issues,” said Novotnak, 61, a remedial math teacher.

If 2018 is the Year of the Woman, it’s not just because of the record number of women running for office, but also for the surge of activism among women like those of the Fogelsville Huddle. The political awakening that began with the women’s marches has swelled into the midterm elections and expanded the definition of “women’s issues” to include health care, immigration, gun violence and the environment.

And it has deepened the gender divide between the two parties, as women have moved increasingly to the left.

In a Gallup survey of registered voters in September, while men favored Republicans over Democrats, 50 percent to 44 percent, women preferred Democrats by 58 percent to 34 percent. That 24-point split had widened from 8 points in June. Polling has shown millennial women moving left by an even greater margin.

“If people ever ask me, ‘Why did you leave the party?’ I say, ‘I didn’t leave anywhere; I am a member of my cohort; I am a white, college-educated woman,'” said Christine Matthews, a pollster who was a Republican until Trump secured the nomination and now considers herself an independent. Last week, about 15 of her “mom friends” gathered at Matthews’ home in Alexandria, Virginia, for the second of two postcard parties, eating chocolate and drinking wine as they wrote to encourage voters in a congressional district south of them to support the Democratic challenger, Abigail Spanberger.

Several were Never Trumpers, as Matthews describes herself, and about half had been to multiple postcard parties to support Democratic women in other congressional districts. Some had begun writing postcards in Virginia’s 2017 elections, when female candidates had unusual success challenging incumbents in the House of Delegates.

“Everyone’s mood was lifted because we’re all doing something that’s very tangible,” Matthews said. “You’ve got the names of these voters; it’s not the hopeless ‘I’m writing to my congressman’ thing.”

(Activism has run high in Spanberger’s race; “The women are in my grill no matter where I go,” her opponent, Rep. Dave Brat, complained to fellow Republicans in January 2017.)

Alarmed by Trump’s threats to pull the United States out of the Paris climate agreement, Matthews and two friends — one Democrat, one Republican — started 1PlanetWomen to try to make women into climate voters.

They are working with Virginia garden clubs to talk about how climate change affects women’s immediate lives — they can’t enjoy their gardens, for example, with ticks and mosquitoes having longer seasons, and more children have asthma — and have begun running targeted Instagram ads supporting Spanberger. To start the group, they turned to their contact lists of women from school, the neighborhood and church.

“Some of this reflects that women tend to have more of an active social network to begin with,” said Leah Greenberg, the co-founder and co-executive director of Indivisible, an incubator for resistance groups across the country. About 75 percent of local Indivisible leaders and members are women.

“The initial burst of enthusiasm was people pulling together their church friends or neighbors or PTA groups,” Greenberg said. “The social connections are incredible for sustaining the activism.” In Orange County, California, the women who kept organizing the weekly rallies in defense of Obamacare outside the office of Rep. Darrell Issa, a Republican, one day decided to go out to lunch afterward.

“There happened to have been a little wine involved, and it became a tradition,” said one of the organizers, Ellen Montanari, an executive coach. They nicknamed themselves The ReSistas, and after successfully badgering Issa, a Republican, into retirement, they began volunteering for a group seeking to elect a Democrat, Mike Levin, who polls show is now leading in a once reliably Republican district.

“I have friends who say, ‘I just can’t watch the news anymore,'” Montanari said. “I understand it, that it does cause stress, but the only thing that relieves the stress for me is being active.”

Moms Demand Action, an anti-gun-violence group that now counts 5 million supporters, said it had registered more than 100,000 voters and reached more than 200,000 through canvassing.

“I think that women want to take out their frustration and their feeling of powerlessness,” said Shannon Watts, the group’s founder. “We’re only 20 percent of legislators. The power that we have is to use our votes and our voices, and I see women wanting to plug in and get involved.”

Women are doing more than just turning out; donations by women to congressional campaigns have increased 36 percent since 2016, according to the Center for Responsive Politics. The Women’s Philanthropy Institute found a spike in women’s donations to “progressive” charities such as the American Civil Liberties Union and the National Immigration Law Center in the week after the 2016 election; women donated six times as much as men to these groups in that week.

Eve Jorgensen, leader of the Little Rock, Arkansas, Moms Demand chapter, raised $10,000 at an event for Clarke Tucker, a Democrat running for Congress, hounding friends on Facebook and by text to show up.

She did a birthday fundraiser on Facebook for him, and joined friends who started #LunchWithClarke, brown-bagging and donating the $10 they would have spent on lunch to Tucker’s campaign. “With #MeToo and with gun violence and with Kavanaugh, we’ve seen that women really need to speak up and speak out,” said Jorgensen, who maps water lines for a large utility. “Unfortunately, I think you have to have money to play the game.”

One cause led to another. “You get on these lists, and they’ll say, ‘If you’re mad about children being held in prison, give here.'” Jorgensen said, “I’m like, ‘Oh yeah, I’m mad about that.'” She added, “In the South especially, the No. 1 rule is don’t talk about money and don’t talk about politics. Now we’re doing both.” In Pennsylvania, the women of the Fogelsville Huddle went beyond traditional political events. Novotnak began driving families from a local refugee resettlement office to doctor’s appointments, and the group collected toiletries and Christmas gifts for marginalized groups: veterans, women, immigrants and LGBTQ people.

They did not consider themselves political before 2016; they supported abortion rights, but in a Republican neighborhood didn’t mention it, and they didn’t vote on it.

And they had not known each other well. Novotnak ran into Karen Pietrantonio, the lone Democrat in the group, while walking her dog the morning after the 2016 election; Pietrantonio suggested the wine and venting. Novotnak invited Dr. Lori Barnett, a podiatrist she knew from their children’s high school theater production. At the grocery store, she recognized Cathy Schoener as a neighbor; Schoener recognized the look on Novotnak’s face and knew that they felt the same way about the new president.

“He embodied every behavior I try to teach 5-year-olds not to do,” said Schoener, a preschool teacher. Novotnak invited her for wine.

The group was soon active and texting every day. Novotnak stopped going to counseling. “The huddle has saved thousands of dollars in therapy,” she said.

Phone-banking has pushed them beyond what would have been their comfort zone. Many people hang up; others say they are voting but not Democratic.

Last week, Barnett called somebody who did not know Wild, the candidate, but was open to voting for a Democrat. “Well, Susan’s very calm, and she doesn’t tweet out crazy things,” Barnett said. “That’s a good start right there.”

At least three people said they were Republicans but voting straight Democratic. “Until Trump’s out of office,” one told Schoener. “I’m right there with you!” she responded.

She got an older woman on the phone. Yes, the woman said, she planned to vote for Wild. “Let’s get her done,” she added, and hung up.