The Worst Bad Poem? There’s a Contest for That 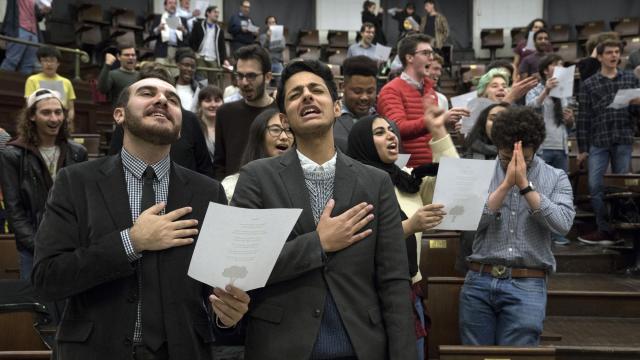 NEW YORK — There was expectation in the room that someone would deliver a poem as lovely as a tree. Or not. The expectation was about choosing the worst of the worst — the worst bad poem of the year.

The Alfred Joyce Kilmer Memorial Bad Poetry Contest has done that for more than 30 years. This time around, the judges in the front row were ready to revel in wretchedness, line by line and verse by verse, as the contestants, more than 30 Columbia University students in a lecture hall on the campus, read their poems aloud.

The contest was named for the poet known for “Trees,” a 12-line verse published in 1913 (“I think that I shall never see/ A poem lovely as a tree,” it begins).

Of course, Kilmer, who graduated from Columbia in 1908, is also known for a service plaza on the New Jersey Turnpike.

“Trees” made Kilmer famous, but his reputation slipped as tastes changed and modernists like Ezra Pound, Wallace Stevens and T.S. Eliot ascended. Carefully rhymed poems like Kilmer’s suddenly seemed, well, sappy. Eventually, Kilmer was considered dreadful enough to parody with a contest that values the ability to string thoughts together the way he did: enthrallingly, even absorbingly. But also badly.

“… All that a poem can do is make the heart feel Lifeless illusions of things not quite real...”

Yeah, I just rhymed remorse with worse. Case in point.”

— From an untitled poem by David Lalo

So, in its way, the Kilmer competition complements the Bulwer-Lytton Fiction Contest, which recognizes atrocious opening lines for novels and is named for a 19th-century British writer infamous for beginning a novel, “It was a dark and stormy night.”

At the Kilmer contest, the entrants took their commitment to badness almost literally. One ended his poem like this: “Bad, bad, bad, bad.” It had at least one fan. Zoe Sottile, the newsletter editor for a Columbia student news site, Bwog, wrote, “I loved it.”

She also wrote that she had assumed that the group behind the contest, Columbia’s Philolexian Society, did not really exist until she arrived and saw its leaders huddling over lists and, later, taking the occasional nip from a flask that was handed around.

“At an institution where students dedicate a lot of time to being good at the things they care about,” she wrote, it was “refreshing” to spend the better part of an evening extolling “being really bad at something instead.”

“My sunlight in a bottle/ only $9.99 for 10 liters at Costco/ a flavor so piercing/ like true love’s gaze/ like a tattoo needle orange flavor dances across my tongue/ it is raw and I must wait 2-3 weeks for it to heal.”

— From “An Ode to the Quality of Orange” by Jux

It was not up to students to decide which poems were the rottenest. That responsibility fell to three professors who served as judges. One, Anne Prescott, an English professor, brought along a worn bad-poetry anthology — there is such a thing — and said that “Trees” was “cliched.”

“Deep-down cliched,” she said, “but technically almost too good.”

Before the first entrant faced the crowd with a takeoff on the biblical “Song of Solomon,” there was an explanation of the contest from Thomas Vinciguerra, a Columbia graduate, who said the Philolexian Society dated to 1802 and counted among its alumni the cultural historian Jacques Barzun and the poet Allen Ginsberg. But the group had been dormant since the 1960s until Vinciguerra revived it in the 1980s and someone suggested a Kilmer contest.

“Philolexian” comes from the Greek word for “love of discourse,” and Vinciguerra’s 1,400-word discourse put Kilmer in his place.

“Mention Joyce Kilmer to the intelligentsia, and they’ll say he was trite, corny and sentimental,” Vinciguerra told the group. “And they’re right.”

He also called the contest’s namesake poet “one of the most old-fashioned, schmaltzy and pious poets who ever lived.”

Kilmer was killed on the Western Front in World War I in July 1918, when he was 31. He was already famous — Vinciguerra said he had made it into “Who’s Who” at 25 — and had enlisted in the Army believing it would be “sheer romance.” Vinciguerra asked for a moment of silence, saying, “Even as we mock his poetry, we never mock his memory.”

Then the contest began. Some of the poems had been written and revised on laptops and cellphones. Some had been scribbled while Vinciguerra was talking. There was a lot of free verse, maybe even some blank verse. A few entries had words that cannot be published here. There were, inevitably, a couple of limericks. A couple of entries doubled as performance art. There was also an 89-line entry that surely qualified as an epic.

The challenge, said one contestant, Jonah Zinn, who intends to transfer to Columbia from Georgetown University, was not just to write bad poetry. “Anyone can write a bad poem,” he said. “This requires an understanding of the form, but used in a bad way. To use a football analogy, you have to throw a great spiral, but in a completely wrong direction.” __

“Who is the voice/ in the wind?/ Who is the candle/ in the night?/ Who will defend the children/ Like a seat belt/ that defends children/ or like a guy/ whose job it is/ to defend children?”

— From “Our American Heroes,” by Isobel Nadine Shaffer

Aaron Speckhard, a freshman, recited the alphabet, then pantomimed each letter. He said that he believed his work qualified as poetry because it was a poet’s duty to memorialize the influences on his or her life. “The alphabet has been a big influence on me for a while,” he said.

Nathaniel Marrinson, a junior who submitted a Haiku, worried his work “might be too good to win.” He said he had written a poem for last year’s contest: “People said it was too good.”

Dylan Temel, a freshman, entered what he said was the first poem he had ever written, “A Story of Unrequited Love in 5 Haikus.”

“Your pith in my nails/ As I peel you, stinging juice/ Squirts into my soul.”

One of the judges, Melissa Fusco, a philosophy professor, said that choosing the winners had been difficult. “There are many ways of being bad,” she said. “I guess poems are like family — bad poems are bad in their own way.”

Vinciguerra said “all the entries were exquisitely bad, as usual.” But Marrinson fared no better than last year — or, considering the objective, no worse: He did not win.

“I tried to dumb it down,” he said, “but cleverness is difficult to tamp down.”

The winner was Temel, for the Haikus about the orange. “I guess my writing can only get better,” he said, adding that he doubted that “a legitimate poet” would have compared love to a rotten orange. Some years the contest winner has been presented with cuttings from bushes at the Kilmer service plaza on the turnpike. Not this year.

The Philolexians also awarded Lalo, a junior at Columbia, a bar of soap for the dirtiest entry, the 89-line epic.

He described dashing it out more or less at the last minute. He said he had planned to spend the evening writing a physics lab report but “needed some excuse to procrastinate.”