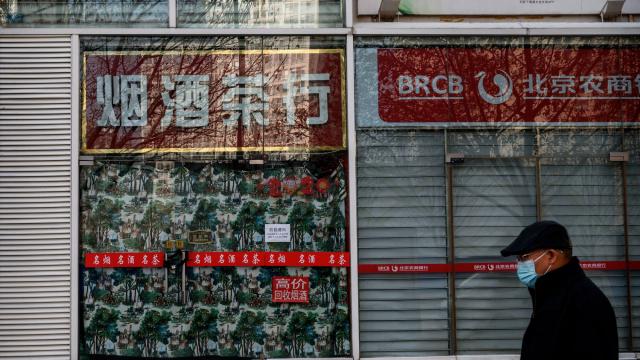 CNN — In offices across Asia, desks are empty and the phones are quiet, as the region grapples with a deadly virus.

In major hubs like Hong Kong and Singapore, shops are shuttered, public facilities are closed, and there are few people wandering the usually-bustling financial districts.

Instead, millions of people are holed up in their apartments, in what may be the world's biggest work-from-home experiment.

The novel coronavirus outbreak, which began in Wuhan, China, in December, has now infected more than 67,000 people and killed over 1,500, the vast majority in mainland China.

Around 60 million people in China were put under full or partial lockdown in January as the government tried to contain the virus. Restrictions have been implemented in many other places too -- but there is also pressure for companies to get back to work, with Chinese President Xi Jinping warning this week that the country needed to stabilize its economy.

In an attempt to limit social contact to slow the spread of the virus, known officially as Covid-19, millions of employees in China and other affected areas are currently working from home.

For some employees, like teachers who have conducted classes digitally for weeks, working from home can be a nightmare.

But in other sectors, this unexpected experiment has been so well received that employers are considering adopting it as a more permanent measure. For those who advocate more flexible working options, the past few weeks mark a possible step toward widespread -- and long-awaited -- reform.

In China, the outbreak has taken a toll on the world's second biggest economy, which had already been struggling due to the US trade war and a slump in domestic demand. Now, businesses have been closed for weeks, raising fears of mass lay-offs, unemployment, and housing foreclosures.

One estimate warned that the outbreak could cost China $62 billion in lost growth.

With authorities urging businesses to reopen, employees across China are beginning to work from home. More than half of workers in the capital Beijing plan to do so instead of going into the office, according to state-run newspaper China Daily.

Tech companies including Tencent, Alibaba and Microsoft have told CNN their staff will work from home for the next one to two weeks, citing health and safety concerns.

The governments of Singapore, Hong Kong, and Macao have ordered civil servants to work from home and asked private employers to do so where possible, with only essential staff or emergency service providers still at the office.

Civil servants in Hong Kong have been working from home for weeks, since the Lunar New Year holiday ended in late January. A Hong Kong government statement said it "appealed to other employers to make flexible work arrangements for employees in order to reduce contacts among people."

Schools in many of these places have been suspended -- so teachers are instead conducting classes through digital learning tools, such as Google Hangouts and other video conferencing software. One Hong Kong school requires students to "check in" digitally and do lesson tasks online with hourly deadlines, so if students skip a class, it leaves a digital record.

But bringing the classroom online has proved frustrating for some educators -- especially those who work with children who have special learning needs or disabilities.

"We use a lot of hands-on learning, so it's been really challenging trying to make our online learning meaningful for the kids when we're not in a classroom environment," said Karen, a special education teacher in Hong Kong, who requested a pseudonym to avoid identifying the school.

Like other schools, Karen and her colleagues have relied on digital tools such as video calls and Google Docs -- but challenges are made harder because her students need a lot of adult support.

"The parents are also working from home, and are having to also be teachers -- it's almost an impossible situation," she said.

Special needs students also often rely on the structure, routine, and human interaction provided by school -- which means remote learning can be unsettling or frustrating.

But for other digital-based sectors, working from home has instead been surprisingly effective, say employers in the field.

"It's a test run that we didn't really choose to implement, but we're quite happy with it," said Brice Lamarque, sales and accounts director at a web and branding agency in Hong Kong. Nearly all the agency's employees have been working from home this month -- and will continue for as long as the Hong Kong government advises, he said.

"Before (the epidemic) happened, we were not really keen on letting our team work from home because we value collaboration," said Lamarque. "But this experience actually showed us that the whole team collaborates quite well even if they're not in the same room, so we're looking at adding that into our employee benefits ... maybe two to three weeks a year."

However, he admitted that a big part of the work-from-home success owed to the digital nature of their company and industry -- employees only require a computer and internet connection, meaning they can work from anywhere.

Joe Hasberry, a Hong Kong employee at an asset management firm, has also been working from home -- but unlike Lamarque, he and other coworkers will be returning to the office next week. The company needs to meet with clients and visitors, meaning it's hard to keep working from home beyond a few weeks.

"Some guys at my office are more (in) investor relations -- it's much more people-centric, so that part of the job wouldn't be able to be done from home," he said.

Meanwhile, some people face social pressure from employers to go into the office despite government guidance to work from home. Employees in customer service industries or front-of-house roles often don't have the option to work remotely.

In China, factory workers also don't have this choice -- instead, those able to return will face stringent health and safety measures each day, like having their body temperatures checked and hands disinfected before entering the workplace, according to state-run media Xinhua.

Some employees in Hong Kong told CNN that they were frustrated that the arrangement could put them at a higher risk of infection, heightened by memories of the 2003 severe acute respiratory syndrome (SARS) outbreak that devastated the city.

Is this the future of work?

Although digitally-based industries may be better suited to work from home, advocates have been pushing for years to make work more flexible, arguing that it can be done with the right infrastructure, to the benefit of both employees and employers.

The past decade has seen expanding opportunities for remote working and increasing remote job listings -- and this shift is largely due to new technologies and changing family demographics.

The movement has been embraced by many parents who say the ability to work from home makes it easier to juggle childcare and a career. Many families who can't afford nannies or day care face a difficult decision when they have a baby, with one of the parents -- often the woman -- having to sacrifice career advancement to care for their child.

The option to work from home doesn't just empower women -- it makes it easier for working fathers to step into that role too, in a step toward gender equality that benefits all parties.

Technological advancements have also made working from home more accessible across all sectors.

"Nowadays, compared to 10 years ago, it is a lot easier to access emails remotely, cloud-based filing, dial-in to calls and video conferencing remotely," said Marie Swarbreck, founder of FLEXImums, a company in Hong Kong that connects job applicants to remote or flexible work opportunities. "The technology and software is available for people to work remotely."

She acknowledged that the current work-from-home situation in Hong Kong has produced "extra challenges which are out of our control" -- for instance, working parents have to care for children whose classes have been suspended. Homes that are empty, quiet, and perfect for remote working on a typical day are now filled with people and distractions.

But these are extraordinary circumstances -- not the norm, she said. Current challenges don't mean that working from home is ineffective, or that it shouldn't be implemented more widely beyond the outbreak.

"Being able to create a workplace that welcomes and encourages working from home, remotely, flexibly, is certainly, in my opinion, the way regular daily life will become more and more."