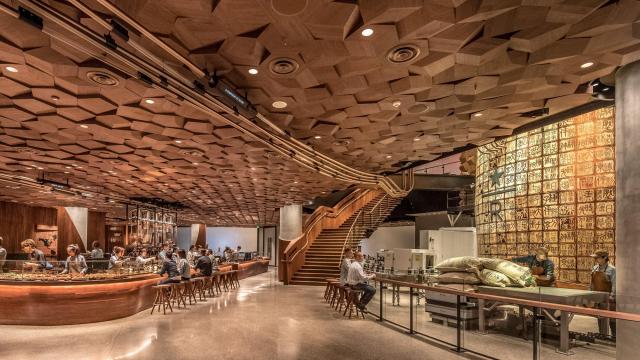 The Seattle-based coffee company opened a 30,000-square-foot store in Shanghai on Tuesday. It's the first Starbucks Reserve Roastery -- the company's new retail offering -- outside the U.S.

It's also the largest Starbucks in the world, spanning an area nearly twice as large as the next biggest, a Roastery in Seattle that opened three years ago.

China is a vital market for Starbucks, according to John Gordon, a restaurant analyst at Pacific Management Consulting.

The one bright spot was China, which stood out as Starbucks' fastest growing market. Sales there were up 8% compared with the same quarter last year.

The company is riding that wave and expanding aggressively in China, opening a new Starbucks store every 15 hours on average.

Even though Chinese are traditionally tea guzzlers and less hooked on coffee than Americans, the country's growing ranks of upwardly mobile consumers still view Starbucks as an attractive, aspirational brand.

The company is playing to that perception with its new Shanghai shop.

"This is a show store," Gordon said. "The point is to be in a highly, highly visible, touristy [area] where there's foot traffic, offices and urban housing in order to promote the brand."

The new store will roast beans on site in a massive copper cask. There is also a special emphasis on tea, with a dedicated bar offering items like nitrogen cold brew tea.

But the Shanghai roastery won't hold the title of largest Starbucks for too long. The company has already inked a deal for an enormous 43,000-square-foot Reserve Roastery in Chicago that's set to open in 2019.