The White House is trying to kill the daily press briefing 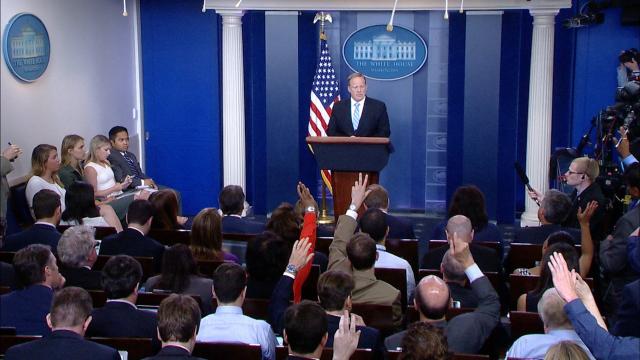 Yes, President Donald Trump has been on two foreign trips during that time -- a longer visit to Germany for the G20 and a short skip to France to celebrate Bastille Day last week. And the July 4 holiday.

This is not an accident. What the White House is doing is working to kill off the daily press briefing -- a ritual that has long functioned as the best (and often only) way for reporters to get the White House on record and on video about various issues affecting the country and the world.

And even in the increasingly common off-camera briefings -- which were a very occasional occurrence in past White Houses -- Sanders and White House press secretary Sean Spicer appear to be working hard to be, at best, unhelpful and, at worst, openly misleading.

Asked whether the White House's "Made in America" week push might also include a curtailing of Trump products produced overseas, Spicer responded: "With respect to his own companies, obviously it's inappropriate to discuss how anything would affect their own companies."

Um, what? Trump has no problem promoting his various properties as he travels to them -- as he did this past weekend when the US Women's Open was held at his golf club in New Jersey. But to talk about them when faced with tougher questions? Not appropriate!

Then there was Spicer's answer on Donald Trump Jr.'s meeting with a Russian lawyer -- among others -- on June 9, 2016 at Trump Tower.

"There was nothing as far as we know that would lead anyone to believe" that the meeting wasn't about adoptions, according to Spicer.

In fact, there are two things that we know that would lead everyone to believe the primary goal of the meeting was to pass dirt on Clinton.

First, the President's tweet this morning: "Most politicians would have gone to a meeting like the one Don jr attended in order to get info on an opponent. That's politics!," he tweeted -- with nary a mention of adoptions.

Second, the actual email exchange between music publicist Rob Goldstone and Trump Jr. -- which Trump Jr. released! -- makes clear that "this is obviously very high level and sensitive information but is part of Russia and its government's support for Mr. Trump."

Here's the deal: The belief is that Trump is Trump's best spokesman. This belief is most strongly held by the President himself. And so, the White House press office should stay behind the scenes to make sure the focus is on what the President is saying on any given day.

"I've said this since the beginning," Spicer told the press corps on June 19. "The president spoke today, he was on-camera....there are days that I'll decide that the president's voice should be the one that speaks and iterate his priorities."

The problem there is that while Trump is fond of talking, he is far less fond of taking questions from reporters. In a press conference with French President Emmanuel Macron last week, Trump called on a Chinese reporter -- breaking with the protocol that he call on an American journalist. (He did speak with reporters for an hour aboard Air Force One, but much of that conversation was off the record.)

The last time Trump did a sit-down interview with a media organization other than Fox News or the Christian Broadcasting Network was more than two months ago.

What's happening here is clear: The White House is working to end the daily briefing and, in its place, put a series of prepared remarks -- without questions -- from the President.

Those are not the same thing. Not even close. And it's not something we should stand idly by and watch happen.