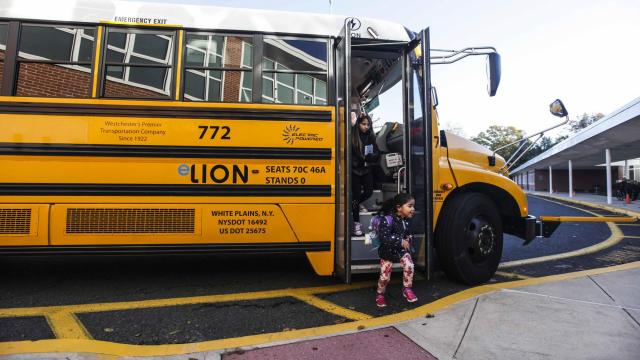 WHITE PLAINS, N.Y. — “Some of the kids call it the singing bus,” said Juliessa Diclo Cruz, 10, as she rode in back of one of New York state’s first-ever electric school buses on a chilly October morning.

It was easy to see why. The rumbling diesel engines on conventional yellow school buses can be heard a block away. But the five new battery-powered buses in White Plains, which went into service this fall, run so quietly that they have to play a four-tone melody for safety as they roam the streets.

The school district’s five singing buses — which cost $365,000 apiece, more than three times the price of a new diesel bus with modern pollution controls — are still a rarity. Of the roughly 480,000 school buses in the United States, only a few hundred are fully electric.

But that is slowly changing. State officials are looking to limit children’s exposure to the harmful exhaust from older diesel buses. They are also increasingly concerned about the carbon emissions that drive global warming. At the same time, the price of electric buses, while out of reach for most school districts, keeps falling as technology improves.

“We see this as the beginning of something that’s very cutting edge,” said Joseph Baker, senior vice president of operations at National Express, the company that operates the school buses in White Plains. “We often joke that someday these White Plains buses will be in a museum.”

Similar experiments are proliferating across the country. California has spent millions of dollars to help budget-strapped school districts purchase dozens of new electric buses, while New York and Massachusetts have funded their own smaller projects.

Many cities, including Los Angeles and Seattle, have also begun purchasing electric buses for their mass transit fleets.

Those efforts could soon get a boost from an unlikely source.

In 2016, after Volkswagen was caught cheating on emissions tests for its diesel engines, the company agreed to pay $2.9 billion into state funds to help clean up the excess nitrogen oxide pollution its diesel cars had put into the air.

Now, some environmental groups are lobbying states to use this money to replace their older diesel school buses with electric ones. So far, Illinois has set aside $10.8 million for electric school buses. Indiana has set aside $2.9 million. New York is planning to fund 400 new school buses, with some expected to be electric.

Critics have charged that spending millions on a relatively small number of expensive electric buses is an inefficient way to clean up air pollution, and that states could reduce pollution more cheaply by focusing on cleaner diesel technology for buses, trucks, locomotives and tugboats.

But electric-bus proponents counter that early investments will prompt manufacturers to ramp up production, pushing prices down further until the buses can compete without subsidies, providing a new tool for tackling climate change. The cost of lithium-ion batteries has fallen 19 percent every time production doubles, according to Bloomberg New Energy Finance. In the meantime, school administrators are carefully monitoring early projects to make sure the buses have sufficient range and run reliably.

As Bayard Guerson, 50, drove one of the new buses through White Plains to pick up elementary school students one morning last month, he checked the digital console on his dashboard showing how much charge he had left: 56 miles’ worth. It was more than enough to travel the 19 miles of his morning routes before he would plug in the vehicle to recharge for the afternoon.

“I could go the whole day without charging,” he said. “But it’s like your cellphone: better to charge all the time.”

Eventually, as charging stations become more common across the state, worries about range could dissipate. For now, though, the White Plains district is mainly using its electric buses for its shortest school routes. And administrators are hesitant to use them for out-of-town field trips, like one to the Bronx Zoo, about 16 miles away.

On dependability, officials in White Plains give the buses, which were made by Lion Electric, a Quebec-based company, a passing grade.

“So far, so good,” said Sergio Alfonso, the district’s director of transportation. “We always expect issues with new technology, but we haven’t seen anything out of the ordinary yet.”

In 2016, in contrast, three school districts in Massachusetts bought three buses from Lion Electric under a state-funded pilot project. The buses had repeated battery and software failures, and parts often had to be shipped to Canada for repairs, putting the vehicles out of commission for lengthy spells.

Lion Electric says it has learned from those early missteps and is training mechanics in White Plains, as well as helping to establish a service center nearby in New Jersey for more serious problems.

White Plains was only able to afford its five buses with outside help. National Express received a state grant that offset $120,000 of the cost of each vehicle. The company then set up a partnership with Consolidated Edison, the local electric utility, which agreed to chip in another $100,000 per bus.

In return, Con Ed gets the right to use the buses to help power the grid in the summer, when school is out and the vehicles sit idle. Their batteries would store electricity when demand is low and discharge it during peak hours.

The grid project is one of the first of its kind, and, in theory, could be a way for utilities to help finance electric school buses elsewhere in the state. As New York builds more solar and wind power, it will need lots of new energy storage. The utility plans to test the buses’ batteries next summer to see how they hold up under heavy use and check whether the economics work.

In California, the Twin Rivers Unified School District in North Sacramento has purchased 16 electric school buses over the past year with a combination of state and local aid.

To date, according to Timothy Shannon, the district’s transportation director, the electric buses have cost about 75 percent less to fuel. They use smart chargers to power up during off-peak hours when electricity rates are lower. And, with fewer moving parts, they cost 60 percent less to maintain.

But even with those savings, Shannon said, the upfront cost of electric buses would have to fall considerably for school districts to consider buying them without outside help.

According to Marc Bedard, chief executive of Lion Electric, that day could come sooner than many expect.

“Within seven years, we think electric school buses will get to a similar price as diesel,” Bedard said. “But it’s all changing so fast. Three years ago, there was a lot of skepticism about whether electric buses were even feasible. Now, we’re not talking about whether they’re feasible. It’s all about how to make the business case work.” For now, not all states are convinced that electric buses are the way to go.

Arizona plans to spend $38 million of its Volkswagen funds to replace its oldest school buses, but will focus primarily on propane or cleaner diesel technology. In its analysis, the state found it could buy 150 such buses for the cost of fewer than 50 electric buses and eliminate far more pollution overall.

Blue Bird, a bus manufacturer based in Fort Valley, Georgia, introduced its first electric models last year in response to the growing California market. In the near future, though, the company said it expects to sell many more propane-fueled buses — which produce fewer conventional pollutants than diesel — because school districts can afford them without subsidies.

Beyond the economic factors, school administrators in White Plains see an intangible value in electric buses: They are educational.

The district has been integrating environmental lessons into its curriculum, offering a farm-to-table elective and encouraging students to compost. The buses represent another teachable moment.

“It’s a tremendous learning experience,” said Joseph Ricca, superintendent of the White Plains school district. “It’s one thing to read about this in a book, it’s another to get on and actually ride it.”