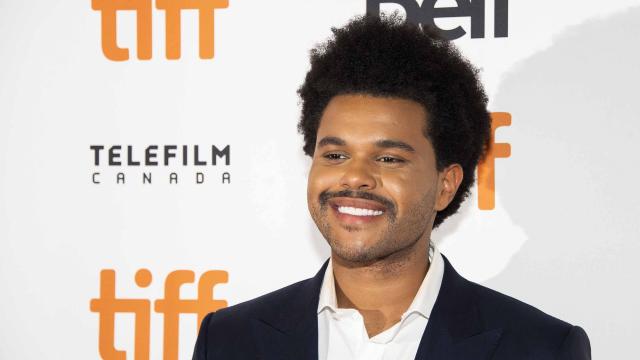 CNN — The bandages were back, but not on The Weeknd's face this time.

The Grammy-winning singer took to the stage for the Pepsi Super Bowl LV halftime performance with plenty of pyrotechnics, lights and men dressed like The Weeknd in all black with red jackets and bandaged faces.

The Weeknd performed a medley of his hits, including "Can't Feel My Face," "Earned It" and his more recent chart topper, "Blinding Lights."

The colorful set in the stands of the stadium, which resembled the Las Vegas strip, was the backdrop for headliner and a massive choir and instrumentalists.

Toward the end of the show, The Weeknd moved to the field with an army of bandaged-faced dancers in an apparent nod to recent appearances in which his face was wrapped in bandages, sometimes looking bruised and bloodied.

Ahead of the event, The Weeknd explained that there would be no surprise guests and only members of his production joined him during the performance due to Covid-19 protocols.

"I've been reading a lot of rumors," he told the NFL Network Thursday. "There wasn't any room to fit it in the narrative and the story I was telling in the performance. So there's no special guests, no."

He reportedly spent $7 million of his own money on the halftime show.

The Weeknd explained to Variety what those bandages have been all about.

"The significance of the entire head bandages is reflecting on the absurd culture of Hollywood celebrity and people manipulating themselves for superficial reasons to please and be validated."