The Wall of Love Outside a Jail 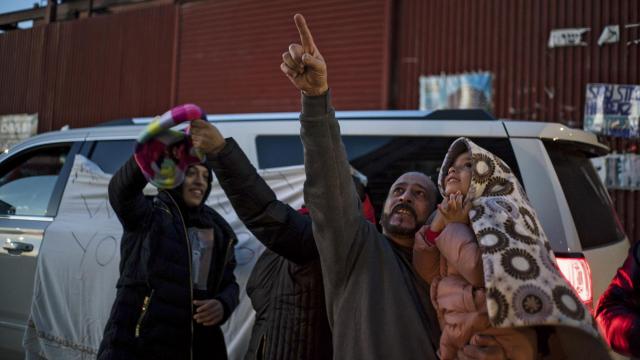 NEW YORK — Maria stood outside the Metropolitan Detention Center in the Sunset Park neighborhood in Brooklyn, on a recent evening, looking up. The jail loomed above, a concrete bulwark more than a dozen stories high and lined in narrow windows. Behind one of them was her husband.

Maria, who wished to be identified only her first name because of her husband’s notoriety, had been standing there for hours. She had flown in from Bogotá, Colombia, for the weekend, only to learn she would not be allowed inside.

The sun was going down and it was time to go; she had a flight to catch. But first, she went to her rental car and pulled out what looked like a rolled-up poster and some packing tape. “A little message for my husband,” said Maria, 33, in Spanish, walking over to a warehouse across from the jail.

A section of the wall had been covered in signs. “Happy Father’s Day Chris B.” “Happy Thanksgiving Luchie.” “I Love You Payroll.” “Stay Strong Hubberz. We Got This.” There were signs in Spanish, posters in Hebrew. Some were handwritten and covered in tape to protect them from the elements. Others were printed on durable plastic. They hung amid scraps of tape, deflated balloons and the tattered remnants of even older signs.

Around 1,750 inmates — mainly men — are held at the Metropolitan Detention Center, a federal jail on the Brooklyn waterfront. Most of the inmates are awaiting trial or sentencing in federal cases. The jail has housed drug dealers, mobsters, operatives for al-Qaida and extradited drug traffickers from Colombia, like Maria’s husband.

But inmates’ families are also bound to the jail, where they pay weekly visits andgather to celebrate birthdays and holidays — and, lately, to post signs.

The signs are clustered at one end of the low-slung warehouse that faces the detention center, on 29th Street. There is no formal system behind the effort, no Facebook group. Like Maria, who said she had noticed the signs during a previous visit, relatives see them and come back with their own. It is a gesture of last resort.

A spokeswoman for Herman Quay, the jail’s warden, said in an email that the jail was concerned about the posters only if they affected “the security or orderly running” of the detention center, and that the jail “encourages inmates to maintain family ties.” Some jail personnel, who said they were not authorized to give their names, said that inmates were occasionally reprimanded for banging on their windows after spotting a family member posting a sign below.

From his cell, Varick Winters, 26, who is in for drug-related offenses and violation of parole, could look out and see families arriving for visiting hours, posting signs and waving, he said through his mother, Leann Winters, who relayed questions by phone. Asked whether the message wall boosted morale, he said, “It makes you want to cooperate.”

In most cases, inmates are allowed visitors on one day of the week. These visits can be whittled down to less than an hour, relatives say, because of the time-consuming process of entering the building, or they can be forbidden altogether depending on the inmate’s risk factor or whether the jail is on lockdown.

Relatives say the signs are a way to communicate when they cannot visit, to show affection on a special day, and to defy a system that strictly limits personal touches: Mail is inspected, gifts must be ordered through a third-party vendor like Amazon, and in the visiting area, the only items that can be handed over are small bills and food from the vending machines.

Another reason relatives post signs is that inmates not only can see them from above but also can respond.

After Maria hung her sign, she turned and looked up again. “I’m going to lift my hand, and he’s going to ——" A tiny, white light appeared in a window of an upper floor and began to blink. Miniature flashlights, ostensibly used for reading at night, cost about $8 in the jail commissary. Inmates also turn the lights of their cells off and on to signal to relatives below, and angle mirrors toward the sun.

The Metropolitan Detention Center lies on a waterfront strip of Sunset Park known as Industry City. The area, once thoroughly industrial, has recently begun to transform as outlets, showrooms and startups open in redeveloped buildings. But around the jail, the view remains treeless and desolate.

No one can say exactly when people began posting signs on the warehouse, but an image captured by Google Earth shows it was completely blank in 2013. A spokesman for Con Edison, which owns the warehouse, said that the signs were periodically removed and that the current batch would soon be taken down. In the meantime, the rain and the wind do much of the work.

But new ones always appear. On a recent evening, Jeffrey, 17, and his brother Jason, 8, took the subway from the South Bronx to Sunset Park and walked to the jail. Jeffrey held Jason’s hand as they crossed under the Gowanus Expressway toward the water’s edge.

The routine was familiar. The boys went into the jail to get the form they filled out before every visit, then joined visitors sitting in a glass-encased room outside to wait for their number to be called.

They were there to see their father, who was detained on narcotics charges by the FBI in the early hours of Jeffrey’s birthday last February. Their mother was also arrested. She was released on a bond but could face deportation to Mexico. Because their mother was not allowed to visit their father, Jeffrey said he brought his three younger siblings to see him on his visiting day every week. They took turns.

Last summer, Jeffrey made a sign for his father. “He asked the officer, ‘May I have a chance to peek outside? Because my son put up a poster.’ I put it right there with a picture of my mother and the four of us,” he said, pointing to the warehouse.

The poster said, as Jeffrey recalled, “We hope our father will be reunited again with our mother, his wife and his four children.” It wasn’t up for long; Jeffrey said he was told by a jail employee that the poster could be considered graffiti, so, after about two weeks, he took it down.

By Christmas Day, Maria’s sign had been smeared by the rain and snow and new ones had appeared. There was a poster wishing Misha a Merry Christmas and another that said Feliz Navidad. A Santa Claus decoration and some tinsel had been hung.

As visiting hours began, a car pulled up, then another and another. Abraham Lebowitz had come from Monroe, New York. He had posted the signs in Hebrew earlier in the year, he said, “for a few people inside” from the ultra-Orthodox Jewish Satmar sect. They announced a religious celebration and the opening of a new building. “Just to make a connection,” he said. “They should see what is happening in the outside world.”

Not everyone’s visiting day fell on Christmas, but some families had come anyway. In one car was the family that had posted the sign that said “Happy Father’s Day, Chris B.” months before. They had driven from East New York, Brooklyn.

“We try to come as often as we can,” said Khaiya Tucker, bundling her 2-year-old daughter Aubrey and holding her up so her grandfather could see her from his cell. She pointed to a blinking light on the third floor. “Look, Bree-Bree, it’s your G-Pops,” she said.

An icy wind swept in off the water, and down the street another family huddled beside their idling sport utility vehicle, holding up a bedsheet that said, in permanent marker, “Merry Xmas We Love You Bebo.” They had come from Queens to send a message to Victor, 30, who they said was arrested on drug-related charges about five months ago.

“I’m here because I miss him,” said his mother, who gave only her first name, Sonia, holding the sheet as it twisted and flapped in the wind. “I want him to know I love him.”

Upstairs, a cell lit up.

The family waved and blew kisses as the lights flicked on and off. Victor’s father, Victor Sr., began to weep.

Visitors rushed past, hunkered down. It was bitter cold. The puddles on the street had turned to ice. But Victor’s family stayed outside, stomping against the cold, laughing, looking up. As long as that light was there, it was hard to leave.

Finally, they got in the car, and Sonia’s cellphone rang. It was Victor, calling from a shared jail phone. “I just happened to look outside,” he said. “I didn’t expect to see anybody there.”