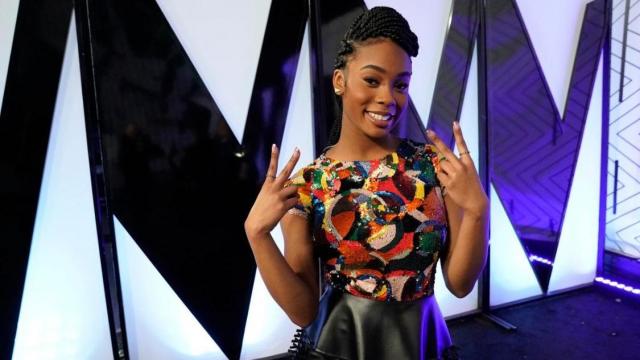 The competition is heating up after the final four contestants were revealed on Tuesday night.

The first contestant to reach the winner's circle was team Blake Shelton's Kirk Jay. The Alabama native has captivated viewers with his inspiring back story and immense talent since the blind auditions.

Because of his long standing fan support, the country singer is a likely candidate to win the entire competition.

Next up, Kymberli Joye joined Jay in the top four.

The aspiring gospel vocalist on team Kelly Clarkson has continuously impressed coaches with her immense talent that she says was crafted from years of singing in a gospel choir.

On Monday, she performed a rendition of "Never Alone" by Tori Kelly and Kirk Franklin. Her cover took the entire audience to church for the second week in a row and seemed to make the singer a no-brainer for the top four.

Another no-brainer for the top four was the country queen, Chevel Shepherd. The 16-year-old has proved that she is immensely talented for her age each week, but her last performance seemed to stand out from the rest.

Her performance on Monday night was a cover of "Blue" by LeAnne Rimes, and the song choice was perfect for Shepherd's vocal style. The song allowed her to show off her unique yodeling skills during the chorus. This talent will set her a part from the rest and increase her chances of winning the competition.

The third finalist announced as a part of the final four was team Blake's Chris Kroeze.

His laid-back cool country rasp has seemed to generate large amounts of fan support. So much so, that he was one of the highest streamed artists on apple music at one point in the competition.

However, past singers such as Tyke James were also said to be one of the highest streamed artists, and that did not save him from elimination. Thus, the possibility of Kroeze winning the competition doesn't look bright as he lacks necessary stage presence, but if fans learned their lesson from James, then they may be more vigilant in voting keep Kroeze in the competition.

To break the monotony, coach Jennifer Hudson (JHUD) performed an inspiring song from the film "RGB". The film followed the career of Supreme Court Justice Ruth Bader Ginsburg and JHUD's song entitled "I'll fight" acts as a celebratory anthem for the film.

JHUD also wore a T-Shirt that stated "Nevertheless, She Persisted." The saying became a mantra for the women’s rights movement of 2018.

The song and T-Shirt choice seemed to provide much needed motivation for the three female contestants facing elimination.

Those contestants were: Reagan Strange, Kennedy Holmes and MaKenzie Thomas.

Following, JHUD's performance the three singers were asked to compete in an "Instant Save" which allowed social media users to vote on who would join the top four.

Each singer performed a slow heartfelt song to prove that they belonged in the competition.

For her "Instant Save" performance MaKenzie Thomas sang “Up To the Mountain” by Patty Griffin. The song choice allowed Thomas, to belt out clear and crisp notes, but her vocal expertise was not enough to keep her in the running.

Along with Thomas, Reagan Strange's "Instant Save" performance was not enough to keep her in the competition.

The victor in this round was Kennedy Holmes. The youngest member in the competition beat the odds and was able to celebrate her 14th birthday as a member of the winners circle.

Tune in at 8 p.m. Monday on WRAL-TV and NBC to see the top four perform in preparation for another round of eliminations.