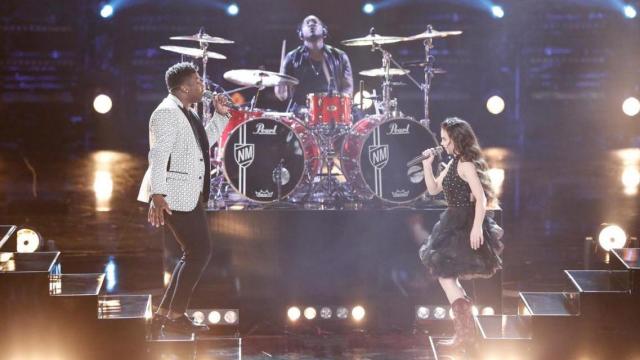 The top eight contestants of "The Voice" performed on Monday night's episode to convince viewers to give them a shot at the top four.

The night kicked off with a performance from team Kelly Clarkson's Sarah Grace. The 15-year-old performer shocked viewers last week with a completely remixed version of "Amazing Grace." This week she kept it safe by singing a rendition of "Sign of The Times" by Harry Styles.

The performance more closely matched the bluesy pop style that Grace has been known for throughout the season. The singer also played the piano during her performance, proving once again that she is multi-talented.

The pair sang a mashup of "Jumpin' Jack Flash" by The Rolling Stones and "Chain of Fools" by Aretha Franklin. The combination of blues, rock and soul matched the singers two personal styles perfectly. Kroeze was able to show off his cool laid back voice and Grace pulled out some long notes that evoked strong emotions.

Kroeze also had a solo performance in which he sang "Can't You See" by Marshall Tucker. The singer showed that he is multi-talented as well by playing a guitar during his performance.

Duets seemed to be the theme of the night, since multiple pairs preformed together to show off their vocal skills.

Next up, the two most popular contestants of the season performed another mashup. Kennedy Holmes of team Jennifer Hudson (JHUD) and Regan Strange of team Adam performed a combination of Janelle Monáe's "Tightrope" and Pharell's "Happy." Each singer was definitely able to hold their own. Both singers showed off powerful pop vocals. They seemed as though they were thoroughly having fun and were not in competition with each other despite the four contestant elimination that will occur on Tuesday night.

The pair was also given the opportunity to perform solo.

The Voice Tuesday night recap: And then there were 8

Strange performed an emotional rendition of "You Are The Reason" by Calum Scott. It was clear that the singer really gave her all in an attempt to redeem herself after sitting out last week.

The young vocalist was able to beat the odds last week after she was voted into the top eight, despite not being able to perform due to illness. Her acceptance into the winner's circle was, in part due, to her coach. When asked to give words of encouragement the to another contestant the pop singer instead advocated for Strange.

"I gotta fight for my girl," Levine said.

The coach's comments seemed to upset viewers and other coaches. Clarkson even felt the need to intrude and mention that Nico was a very talented singer who fought hard for his place on the show. JHUD also felt the need to give words of encouragement.

Ultimately, viewers choose Strange to continue on in the competition. The singer proved that she deserved the spot with her performance on Monday night.

Another contestant who also proved that she deserved her spot was team JHUD's Mackenzie Thomas.

The constant sang "Vision of Love" by Mariah Carey that the coaches definitely loved. All four coaches gave the singer a standing ovation for her strong vocal runs and undeniable talent.

Thomas has garnered large amounts of support for her talent and inspiring background. She is likely to go on to the final four.

Two singers that are also fan-favorites preformed next. Kirk Jay of team Blake Shelton and Chevel Shepherd of team Kelly performed a combination of "She's Country" by Jason Aldean and "Country Must Be Country Wide" by Brantley Gilbert.

The pair of country vocalists definitely knocked the performance out of the park. Shepherd was able to let her vocal skills shine and held her own against Jay. But, Jay was able to outshine Shepherd at some points in the performance by belting out some long and strong notes.

And even though Jay was able to outshine Shepherd, his vocals were no match for the next performer. Kymberli Joye followed the duet with a rendition of "Never Alone" by Tori Kelly and Kirk Franklin.

The aspiring-gospel singer took the audience to church for a second week in a row with her performance. Joye let out smooth gospel runs exciting ad-libs that added to the spiritual experience.

Following her performance, the singer changed the pace with a duet that included Thomas. The two made a powerful pair in an R&B mashup of "Got to Be Real" by Cherly Lynn and "Best of My Love" by The Emotions.

Both Joye and Thomas were able to embody the soulful sounds of the original singers and emit plenty of emotions.

Next up, Chevel Shepherd changed the pace once again with a country cover of "Blue" by LeAnn Rimes. And, the song choice was perfect for this small queen of country.

Shepherd was able to show off her unique yodeling skills in the chorus. This unique talent will set her apart from the rest and increase her chances of joining the top four.

Last but not least, another country contestant and Shepherd's duet partner took the stage. Jay sang "I Swear" by John Michael Montgomery.

While his voice did seem a little shaky at some points, the overall performance was a hit. He dedicated the song to a fan battling cancer and it was clear that he gave song his all.