The Voice Monday night recap: Top 13 battle it out 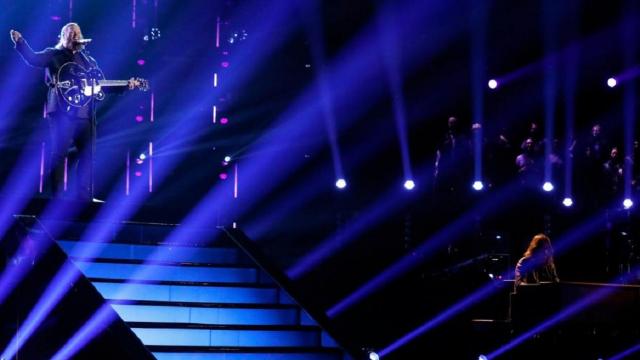 On Monday's episode of The Voice, the top 13 singers performed in front of a live audience as viewers prepared to vote to advance only 11.

Each artist gave their all and some even evoked emotional responses from both the coaches and viewers.

The first performer of the night was a singer that Blake Shelton saved from elimination last week, Chris Kroeze.

The country vocalist sang a cover of "Let It Be" by the Beatles and let it be known that Shelton made a good decision by saving him.

His choice to sing a song outside of the country genre paid off. The rendition showed Kroeze's versatility as he transformed the Beatles classic into a gritty blues number.

The singer dedicated the performance to the family of a 13-year-old girl who is missing in his native Wisconsin.

Kroeze's tribute was not the only dedication on Monday. Other artists also dedicated heartfelt songs to people back home.

Some of the most emotional performances came from team Adam Levine's DeAndre Nico and Regan Strange along with team Jennifer Hudson's Sandyredd.

Nico sang a cover of "I Can Only Imagine" by MercyMe, which he dedicated to his girlfriend who recently suffered a miscarriage. The singer's strong vocals and seemingly flawless execution seemed to be a genuine attempt at expressing the emotional pain his girlfriend endured from the loss of their unborn child.

Later on, Sandyredd wowed coaches and the audience once again with her strong vocal skills and undeniable stage presence. The Chicago native dedicated a rendition of "It's So Hard to Say Goodbye to Yesterday" by Boys II Men to her late mother and became emotional during the performance. Sandyredd has stated in previous episodes that her late mother has been her inspiration for pursuing a career in music.

The singer's wide pitch range and ability to evoke emotions have made her a fan favorite who will be hard to beat.

One of team Kelly's youngest members, Chevel Shepherd, lightened the mood with her energetic performance of Little Big Town's "Little White Church." The country vocalist dedicated the song to her dad. Her vocal quality and dance moves on stage helped create a fun change of pace.

The last performance of the night was from Tennessee native Regan Strange, who sang a rendition of "You Say" by Lauren Daigle. She dedicated the song to her grandparents, and her powerful performance left coach Adam Levine shocked. The young vocalist has consistently impressed coaches and has the potential to win the competition.

To see who else will advance in the competition, tune in at 8 p.m. Tuesday on WRAL-TV and NBC.​