Windsor, N.C. — The San Souci ferry in Bertie County crosses the Cashie River at the end of Woodard Road. The ferry has been making that crossing for nearly a century. But Saturday will the last day; the North Carolina Department of Transportation is ending the operation.

The ferry has been docked for the last week. High water in the river has prevented river crossings. It's also doubtful the ferry will make any more crossings before closing at 6 p.m. on June 13.

The coronavirus outbreak can be blamed for the closing. Stay-at-home orders meant fewer people driving, fewer people buying fuel, meaning less tax revenue for the DOT, which runs the ferry.

“Money is short, budgets is messed up right now,” says ferry operator David Hunt. He's been the contractor operating the San Souci and Parker's ferries for nearly five years. “It's coming to an end, unless the state finds some money for it.”

Hunt has talked with Bertie County about possibly coming up with money to keep the ferry going.

The ferry moves slowly, guided by a cable attached to both sides of the river. It's one of three “cable” ferries in the state. The shut down includes Parker's Ferry but leaves Elwell Ferry crossing the Cape Fear River in Bladen County still in operation.

Deborah Parker sits on her porch swing just a few yards from the San Souci dock. “I seen it on the water since I could crawl, hundreds of thousands of times,” she said. “It's just a very serene, pretty picture.” 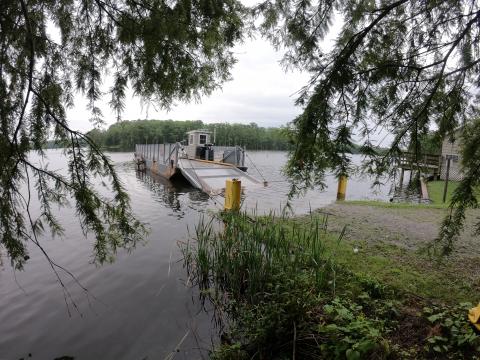 The four-minute ferry route is just a few hundred feet, but the journey to get to this point has been long. The ferry has been operating since the 1930s.

“It's really sad. So many locals, farmers and tourists from out of state use this ferry,” Parker said.

When the DOT made the decision, it hit hard, “I was devastated to be honest,” Hunt said.

As a businessman, Hunt understands when and why cuts need to be made, still, as the final day approaches, the sad reality set in.

Standing on the deck of the ferry as he crossed on Friday, Hunt mused, “It very well could be the very last ride.”