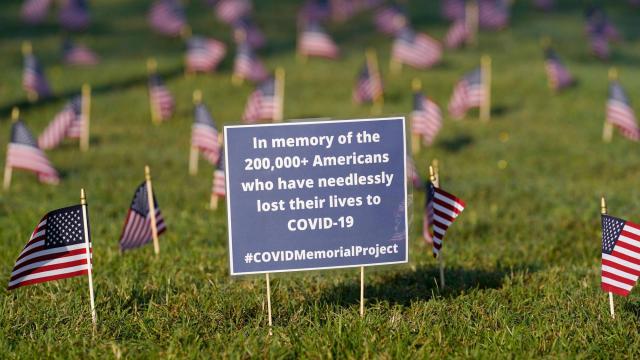 New cases surged to 3,266 from the 738 reported Monday, according to the state's health department. That's the highest one-day number since September 19.

DeSantis lifted restrictions on bars and residents Friday, and scenes of crowded bars and restaurants played out around the state over the weekend.

Until recently a coronavirus hotspot, Florida's cases had been falling, and the state is among only seven with at least a 10% reduction in new cases in the week ending Monday compared to the previous seven days.

Arizona, Georgia, Maryland, Rhode Island, Texas and Virginia are the other six states with a decline in new cases in the past week.

Track cases in your state

In Wisconsin, Covid-19-related hospitalizations have almost doubled since September 18, according to the Wisconsin Hospital Association, with "multiple hospitals" nearing capacity.

Gov. Tony Evers declared a "a new public health emergency due to campus outbreaks" on September 22, and the WHA sent Evers a letter "requesting additional and immediate policy steps be taken to help hospitals preserve access to care during this troubling new phase of the pandemic."

"Multiple hospitals in the Fox Valley, Northeast, and North Central HERC regions are now reporting they are nearing capacity."

Dr. Paul Casey, medical director of the emergency department at Bellin Hospital, made a public plea on Facebook for Wisconsinites to take the pandemic more seriously.

"I can't speak to other areas in the state, but in Brown County, we're in deep trouble," Casey told CNN affiliate WBAY.

More than 1 million people have died worldwide from Covid-19, and the United States accounts for more than 20% of the death toll.

In less than nine months, the death toll jumped from one coronavirus-related death -- in Wuhan, China, on January 9 -- to 1,003,922 Tuesday afternoon, according to data from Johns Hopkins University. The US has been hit hard by the virus, with almost 7.2 million reported infections and more than 205,000 deaths.

With recent spikes in US cases, health experts warn things could soon get worse.

Worldwide, the US ranks No. 1 in the total number of reported deaths and fifth per 100,000 people.

Johns Hopkins' tally shows the US, Brazil, India and Mexico account for more than 50% of coronavirus deaths.

Some states fight spikes while others ease restrictions

As trends vary across the US, some local leaders are stepping back toward normal while others are clamping down on efforts to combat the virus' spread.

Chicago bars, restaurants, gyms and personal services will be allowed to expand service Thursday because of "sufficient progress in the fight against Covid-19," Chicago Mayor Lori Lightfoot said Monday.

"Over the past six months, we have asked so much of our business community, but each time, our businesses have stepped up to the plate," she said in a news release. "This next step in our reopening is good news for business owners as well as the communities they serve and the thousands of residents that work for them."

New Jersey is set to receive 2.6 million rapid coronavirus tests from the federal government to help fight spikes in cases.

Children account for about 10% of coronavirus cases, but people should still pay attention to virus spread in that age group, said Dr. Anthony Fauci, a member of the White House Coronavirus Task Force.

"Children do get infected, and we'd better be careful about just dismissing infection in children," Fauci said, adding it's unclear the degree to which they transmit the virus.

Some studies suggest they don't spread it as "efficiently" as adults, said Fauci, who is director of the National Institute of Allergy and Infectious Diseases.

"It's an evolving situation," he said. "You have got to keep an open mind when it comes to an issue like what the role of children is in transmission."

Covid-19 cases among ages 12 to 17 well outpaced the cases in children ages 5 to 11, the US Centers for Disease Control and Prevention said in a report published Monday.

The report included data on 277,285 laboratory-confirmed cases among school-age children in the US from March 1 to September 19. Among the cases, 37% were in children ages 5 to 11 and 63% were in adolescents.

The data might underestimate the true incidence of disease among school-age children, as testing was often prioritized for people with symptoms, and those without symptoms may not have been tested, the researchers noted.

CORRECTION: This story has been updated to reflect the number of months between the first and 1 millionth global death from Covid-19. It took less than nine months to reach that milestone.