Florida will be 'like a house on fire' in weeks with loose coronavirus restrictions, infectious disease expert says 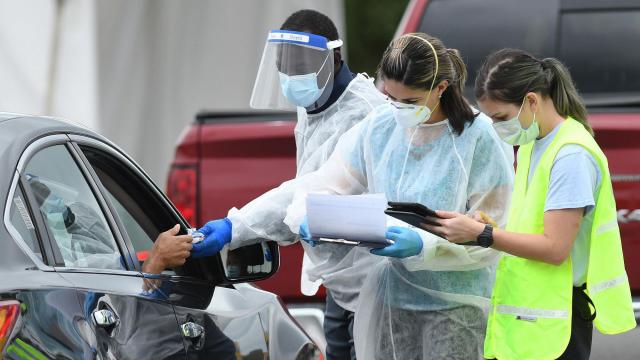 CNN — As health officials in Florida reported nearly 3,000 new cases of coronavirus on Friday, the state is bracing to become "like a house on fire," an infectious disease expert says.

"Florida is ripe for another large outbreak," said Mike Osterholm, director of the Center for Infectious Disease Research and Policy at the University of Minnesota.

"What they've done is opened up everything as if nothing had ever happened there and you and I could be talking probably in eight to 10 weeks, and I will likely bet that Florida will be a house on fire," Osterholm told CNN's Jake Tapper.

Health officials in Florida reported 2,908 new cases of Covid-19 and 118 deaths on Friday, according to data from the Florida Department of Health. The agency has reported at least 2,200 new cases daily for four consecutive days.

Gov. Ron DeSantis signed an executive order last month allowing bars and restaurants to reopen to full capacity. In Miami, where in-person instruction resumed on Monday, three students and an employee have tested positive for the virus, according to Miami-Dade Public Schools.

"Unfortunately, despite loudly voicing our concerns about a premature reopening of schools, we now find ourselves in complete fear and misery after only four days," Karla Hernandez-Mats, president of the district's teachers union, wrote in a statement on Thursday.

CNN has reached out to the school district.

The US is averaging more than 46,000 new Covid-19 infections each day -- up 12% from the previous week and more than double what the country was seeing in June.

At least 50,191 new Covid-19 cases have been reported across the country on Friday, according to Johns Hopkins University.

Infections are now on the rise across several US regions and experts warn the number of cases is far too high, ahead of what's forecast to be a challenging -- and deadly -- winter season.

The latest US Centers for Disease Control and Prevention (CDC) ensemble forecast says US Covid-19 deaths could reach 233,000 by the end of this month.

And as the weather gets colder, things will get tougher.

"It's important for all of us to not let our guard down during Thanksgiving," Dr. Deborah Birx of the White House Coronavirus Task Force said. "We see that from the High Holy Days, people are just yearning to be together."

Even if friends and relatives appear healthy, it's impossible to know for sure that they aren't infected without testing, Birx said at a media briefing in Cambridge, Massachusetts, Friday.

CDC researchers who analyzed trends by age groups in June and July saw that the number of positive test results among people under 25 began rising 31 days before a county was first identified as a hot spot.

Wisconsin announced it would open a field hospital next week to address the surge of patients.

"We obviously hoped this day wouldn't come, but unfortunately, Wisconsin is in a much different and more dire place today, and our healthcare systems are being overwhelmed," Gov. Tony Evers said in a news conference.

The state has seen some of the country's most alarming trends recently: reporting record-high cases, hospitalizations and deaths in the past days.

"This is a sobering number," the governor said, and later lashed out at the President, who recently told Americans not to let the virus "dominate."

Meanwhile, in neighboring New York, local officials are trying to get a hold of clusters that have broken out in several communities in Brooklyn, Queens, and Rockland and Orange counties.

To help curb the spread of the virus, the state recently imposed strict restrictions on areas where Covid-19 clusters are occurring, many of which have large Orthodox Jewish populations. Those restrictions included shutting down schools and most non-essential businesses and limiting crowds at houses of worship.

The new measures were met with protests by members of the Orthodox Jewish community and items were set on fire in Borough Park.

"Let's continue to use our voices in demanding what no one can take away from us -- our ability to gather in prayer," he said in a statement. "But we must do this peacefully because that's what makes us who we are."

Cuomo on Friday said the issue "is not a matter of religious freedom."

"I don't care if you're Roman Catholic, you're Jewish, you're Muslim, you're an atheist," Cuomo told CNN. "You have to follow the rules of the state."

"If you don't follow the rules, the infection rate spreads, people get sick, and then you make others sick," Cuomo said.