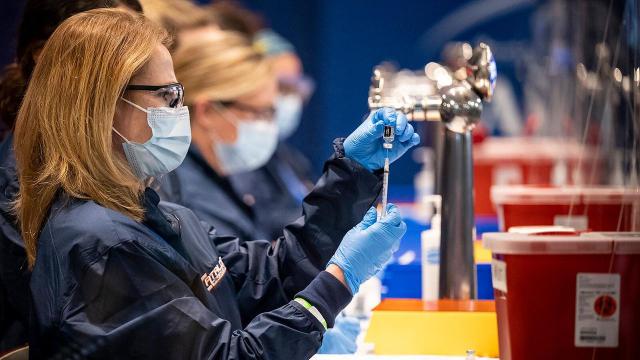 CNN — With multiple new coronavirus strains spreading across the country, Americans need to get vaccinated as quickly as possible to stop more mutations from emerging, Dr. Anthony Fauci said Monday,

"You need to get vaccinated when it becomes available as quickly and as expeditiously as possible throughout the country," Fauci, President Joe Biden's chief medical adviser, said in a virtual news briefing with the White House Covid-19 response team. "And the reason for that is ... viruses cannot mutate if they don't replicate. And if you stop their replication by vaccinating widely and not giving the virus an open playing field to continue to respond to the pressures that you put on it, you will not get mutations."

Speaking to CNN's Wolf Blitzer later Monday, Fauci said even if someone has had coronavirus, there's a "very high rate" of being reinfected with the new variants if they become dominant.

"If it becomes dominant, the experience of our colleagues in South Africa indicate that even if you've been infected with the original virus that there is a very high rate of reinfection to the point where previous infection does not seem to protect you against reinfection," Fauci said on CNN.

He emphasized the importance of getting vaccinated to prevent severe and potentially fatal illness that may require hospitalization.

"Even though there is a diminished protection against the variants, there's enough protection to prevent you from getting serious disease, including hospitalization and deaths," Fauci said. "So, vaccination is critical."

Another health expert said the United States should waste no time vaccinating Americans before those variants that are more transmissible overwhelm the country.

"Right now we are in an absolute race against time with these variants, with trying to get people vaccinated before they spread too much across our country, said emergency physician Dr. Megan Ranney, director of the Brown-Lifespan Center for Digital Health in Rhode Island. "It means that just going to the grocery store, to school or to work could become more dangerous. We have an already overtaxed and exhausted health care system."

The US just suffered its deadliest month of the entire pandemic, with more than 95,300 Covid-19 deaths in January. That's an average of more than 3,070 deaths a day.

The better news: New Covid-19 case numbers are decreasing in most states. And for the first time in almost two months, Covid-19 hospitalizations finally dipped below 100,000 after a catastrophic post-holiday surge.

Despite the falling numbers, Ranney said now is not the time to let up on the basic precautions such as wearing masks, avoiding unmasked gatherings indoors, hand washing and social distancing.

"We have a little breathing room right now," she said. "But if these new variants become dominant in our country, we are going to be right back where we were in November and December -- and perhaps even worse."

US efforts to ramp up coronavirus sequencing to identify concerning strains have jumped in recent weeks, but still aren't at the level they need to be, said Dr. Rochelle Walensky, director of the US Centers for Disease Control and Prevention.

Speaking at a news briefing Monday, Walensky said the United States is on track to sequence at least 7,000 samples weekly. Experts have previously told CNN that the United States should aim to sequence 5% to 10% of cases. Based on cases from the past seven days, this would amount to roughly 52,000 to 104,000 sequences a week.

"The recent rise in number of variants detected in the United States is likely due at least in part to our expanded ability to sequence virus samples," Walensky noted.

A new order by the CDC requiring people to wear masks while riding any kind of public transportation will go into effect at 11:59 p.m. Monday.

Airlines and airports will be required to report passengers who disobey the new federal mask mandate to federal authorities, according to documents obtained by CNN.

The directive says failure to comply with the mask rules at an airport "may result in the removal and denial of re-entry" of violators.

The CDC said public transportation operators must use best efforts to enforce the mandate, such as allowing only those wearing masks to board and disembarking passengers who refuse to comply.

The order was signed by Dr. Martin Cetron, director of the CDC's Division of Global Migration and Quarantine.

People can take their masks off briefly to eat, drink or take medication; verify their identity to law enforcement or transportation officials; communicate with hearing impaired people; don an oxygen mask on an aircraft; or during a medical emergency, the CDC said.

Children younger than 2 or people with a disability who cannot wear a mask are exempt.

The debate over how to vaccinate

The storm that is dumping snow across the Northeast is delaying vaccinations there. State-run mass vaccination sites in New York and New Jersey are set to be closed Tuesday due to the winter storm. In Massachusetts, the state Department of Transportation is coordinating with several Covid-19 vaccination sites to "keep them as accessible as possible for as long as possible," Gov. Charlie Baker said.

But with new variants spreading, some health experts say the US should go ahead and give first doses to as many people as possible -- even if that might delay second doses for some.

"We still want to get two doses in everyone," Dr. Michael Osterholm, director of the University of Minnesota's Center for Infectious Disease Research and Policy, told NBC on Sunday.

"But I think right now, in advance of this surge, we need to get as many one doses in as many people over 65 as we possibly can to reduce serious illness and deaths that are going to occur over the next weeks ahead."

Osterholm said he's worried about a potential surge caused by the highly contagious B.1.1.7 strain, first identified in the UK. That strain has now spread to at least 32 states, according to the CDC.

"The surge that is likely to occur with this new variant from England is going to happen in the next six to 14 weeks," Osterholm said. "And if we see that happen ... we are going to see something like we have not yet seen in this country."

While Osterholm's idea is "admirable, trying to give at least some protection to as many people as possible," it also has drawbacks, said William Haseltine, president of ACCESS Health International.

"First, they may not get fully protected, and that might accelerate the rate of variants taking over and causing us much more trouble in the future," said Haseltine, a former professor at Harvard Medical School. "Secondly, we really don't know if delaying the second dose for a long time is going to give you the same degree of protection."

Ideally, people should stick to the recommended interval of either three weeks or four weeks, said Fauci, also the director of the National Institute of Allergy and Infectious Diseases.

"But if someone who, for one reason or another, is a bit late by a couple of weeks ... there is some wiggle room," Fauci said. "It's not the end of the world if you delay a little bit. If you want to delay it by six months, that's different."

States should not be holding back doses to give people their second shot, Fauci said.

"The first priority will always be to get the people who have gotten their first doses to get their second doses," Fauci said.

But "a dose that's available is going to go into someone's arm. If a person is ready for their second dose, that person will be prioritized."

Ranney said she hopes increased production can help ensure people can get their second doses in a timely manner.

"We should count on Pfizer and Moderna and hopefully soon Johnson & Johnson as well to help fill that gap," she said.

"Give everyone the doses that you can right now and count on that increased production so that you can get people adequately protected."

New York officials acknowledged Monday there's a clear racial disparity among the people who have received vaccine doses to date and the city needs to redouble its efforts to address inequitable access.

A new CDC report released Monday highlighted that issue. People in the United States who have received at least one dose of the Covid-19 vaccine were most likely to be female, non-Hispanic White and at least 50 years old, according to the report.

The CDC collected demographic data from states and other jurisdictions on people who began the vaccination process between December 14 and January 14.

Age and gender were identified for nearly all 12.5 million individuals who received at least one dose of Covid-19 vaccine in the first month of distribution. Of those, about 63% were female and about 55% were at least 50 years old.

Race and ethnicity, however, were unknown for about half of the individuals vaccinated. Six jurisdictions did not report any race or ethnicity data.

But of those for whom race and ethnicity were identified, about 60% were non-Hispanic White. About 11.5% were Hispanic or Latino, 6% Asian, 5.4% Black, 2% American Indian or Alaskan Native, and less than 1% Native Hawaiian or Pacific Islander.

The demographic data of those vaccinated against Covid-19 likely reflects the demographics of the people in the Phase 1a priority group, including health care personnel and long-term care facility residents, according to the CDC.

Black and Hispanic people have been found to have more severe outcomes from Covid-19, according to CDC, and "more complete reporting of race and ethnicity data" is needed to detect and respond to potential disparities in Covid-19 vaccination.

Johnson & Johnson may have millions of doses soon

Many Americans hope Johnson & Johnson's Covid-19 vaccine will get emergency use authorization from the Food and Drug Administration this month.

There are two key advantages to the Johnson & Johnson vaccine. It requires only one dose, and it can be kept at normal refrigeration temperatures.

If the vaccine gets a green light from the FDA in the coming weeks, Johnson & Johnson said it would have fewer than 10 million vaccine doses available, a federal health official told CNN.

The number of doses available would be in the single-digit millions and that number would ramp up to 20 or 30 million doses by April, the official said. CNN has reached out to Johnson & Johnson for comment.

The US government is working with the Australian company Ellume to provide more of its fully at-home Covid-19 tests to the United States, the Biden administration said Monday.

The company has been ramping up manufacturing and will ship 100,000 test kits per month to the US from February through July, said Andy Slavitt, senior White House adviser for Covid-19 response.

With a new $230 million contract, Ellume will "be able to scale their production to manufacture more than 19 million test kits per month by the end of this year, 8.5 million of which are guaranteed to the US government," Slavitt said.

The Ellume test can detect Covid-19 with 95% accuracy in about 15 minutes, he said.