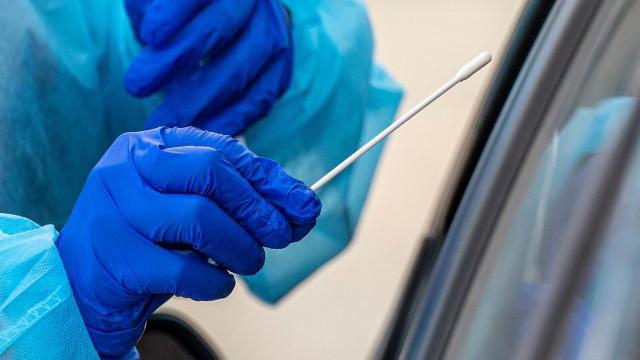 CNN — The US Centers for Disease Control and Prevention posted an optimistic forecast about coronavirus vaccines Wednesday, promising some vaccines by the end of the year.

There could be a limited supply at first but that would increase in the weeks and months after initial release, the CDC says on a new page posted to its coronavirus website.

"The goal is for everyone to be able to easily get a COVID-19 vaccine as soon as large quantities are available," the CDC says. "The plan is to have several thousand vaccination providers available so no one will have to travel far to be vaccinated, whether it's at your doctor's office, retail pharmacy, hospital, or federally qualified health center."

The CDC plays no role in vaccine development but will help distribute vaccines. The National Institutes of Health is helping develop and test vaccines while the US Food and Drug Administration will give any emergency use authorization or approval.

Dr. Anthony Fauci, the director of the NIH's National Institute of Allergy and Infectious Diseases, told CBS News a vaccine might be widely available by April.

Fauci said researchers should know by "November or December" whether some vaccines trials have a safe candidate and that even if and when a safe candidate is determined, initial quantities will likely only be a few million doses.

"If there is limited supply, some groups may be recommended to get a COVID-19 vaccine first," the CDC page notes.

The CDC said that the federal government has committed to distributing coronavirus vaccines for free, though providers may be able to charge an administrative fee that should be covered by insurance.

Small gatherings are becoming a growing source of Covid-19 spread, a leading health expert said, as cases and hospitalizations are on the rise nationwide.

"In the public square, we're seeing a higher degree of vigilance and mitigation steps in many jurisdictions," said CDC Director Dr. Robert Redfield during a call with the nation's governors on Tuesday. Audio of the call was obtained by CNN.

"But what we're seeing as the increasing threat right now is actually acquisition of infection through small household gatherings," Redfield said. "Particularly with Thanksgiving coming up, we think it's really important to stress the vigilance of these continued mitigation steps in the household setting."

Dr. Jonathan Reiner, professor of medicine at George Washington University, said Wednesday he'd advise people to consider not having indoor Thanksgiving dinners with others who aren't in their immediate household.

"The consequences of this virus, particularly for older folks -- the people that we really want to gather with on Thanksgiving -- can be really dire," he said. And, frankly, I'd rather do a Zoom Thanksgiving with people that I love than expose them to something that might kill them," he said.

Two new studies are adding to evidence that suggests your blood type could be linked with your Covid-19 risk, but more research is needed.

Published in the journal Blood Advances on Wednesday, the studies suggest that people with blood type O may be less vulnerable to Covid-19 infection and have a reduced likelihood of getting severely ill.

That study involved analyzing data on Danish people who were tested between February 27 and July 30, and the distribution of blood types among those people was compared with data from people who had not been tested.

That study involved analyzing data on ICU patients who were admitted to six metropolitan Vancouver hospitals between February 21 and April 28.

Both studies come with limitations. They show only an association between blood type and Covid-19 risk. More research is needed to determine whether this connection is true and what could be driving it.

No trick or treating in Beverly Hills

Halloween activities including trick-or-treating and "spraying shaving cream on others" are banned, according to an ordinance approved by the council.

Several high volume trick-or-treating streets will be closed to outside pedestrian and vehicular traffic on Halloween night. Violators could be fined, the city said in a news release.

The ordinance was approved the same day California released its recommendations for Halloween festivities, noting that in-person trick-or-treating and related activities "pose a high risk of spreading COVID-19," but are not explicitly banned.

The decision places Beverly Hills among the first cities in the nation to prohibit in-person Halloween activities.

"This is a fairly small price to pay to keep this trajectory down, keep the schools open," said Beverly Hills Mayor Lester Friedman.

In his ruling issued Tuesday, Judge John Yackel said that the state health department as well as the Sawyer County health department, where the plaintiffs are based, cannot enforce the emergency order until further ordered by the court.

It is unclear whether the restraining order is statewide or just for the county where the filing was placed.

"This is a dangerous decision that leaves our state without a statewide effort to contain this virus," Cudaback wrote in an email. "We need Wisconsinites to stay home and help us prevent the spread of COVID-19."

In a statement before the ruling, the Tavern League of Wisconsin, a non-profit trade association, said that it supports the efforts to limit the spread of Covid-19 but want to "allow our members to continue to serve their communities."

The league said the restaurants, taverns and bars are facing bankruptcy, closure or economic ruin.

"We do not have the financial wherewithal to survive the blunt force of another business shutdown which have not proven effective and will result in catastrophic losses in the hospitality industry in Wisconsin," TLW President Chris Marsicano said Tuesday.

A different circuit court judge on Friday upheld Evers' statewide mask mandate that is scheduled to expire on November 21.

CORRECTION: A previous version of this story inaccurately reported how many of the people who tested positive in the Danish study were blood type O.