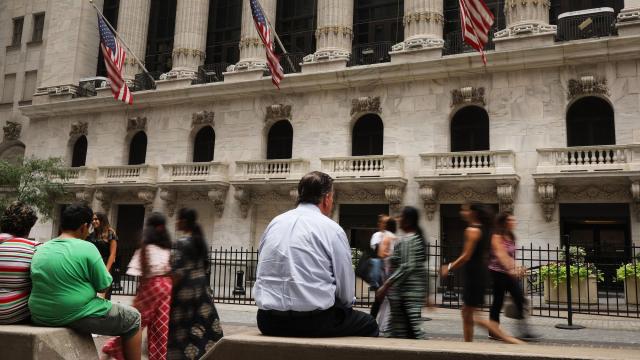 CNN — The recent euphoria on Wall Street suggests the American economy is roaring. Yet there is a growing risk that growth could grind to a near-halt during the final three months of the year.

The New York Fed's Nowcast for fourth quarter GDP is now calling for growth of just 0.4%. That's down from the model's earlier projection for 0.7% growth. The NY Fed cited "negative surprises" in recent economic reports, including a fall in manufacturing production during October.

The Atlanta Fed's GDPNow model is even more bearish. The growth tracker was dimmed on Friday to just 0.3% for the fourth quarter, compared with 1% a week ago. The Atlanta Fed in part blamed lukewarm consumer spending numbers released on Friday that showed retail sales, excluding vehicles and gasoline, inched up just 0.1% in October.

These GDP models are based on incoming economic data and will be updated frequently as new numbers get released. That means it's possible that by the end of the year, these projections will end up looking excessively gloomy. The economy could get a boost in November and December by the fact that the GM auto strike is over.

Wall Street firms are generally cautiously optimistic about the fourth quarter. Goldman Sachs, for instance, dimmed its fourth-quarter GDP estimate on Friday, but only to 1.9%.

Still, these Fed GDP models are suggesting the US economy is barely growing at all this quarter. And when growth slows to a standstill, it makes the economy more vulnerable to a negative shock that could tip it into recession.

Trump says the economy is 'BOOMING'

Contrast all of this with Trump's recent commentary.

"Economy is BOOMING," Trump tweeted on Tuesday. "Seems set to have yet another record day!"

Jerome Powell, the chairman of the Federal Reserve, had a different take.

Powell's point was that there is little risk of the economy overheating, simply because it's not very hot.

GDP growth slowed to 1.9% during the third quarter, down from the 3% growth at the start of the year. Although consumer spending remains solid, the manufacturing sector is in contraction and business spending has contracted for two consecutive quarters. That weakness has been driven by the US-China trade war and slowing global growth.

Extreme greed is back

Still, investors are very bullish right now, perhaps betting that the worst of the economic slowdown may be over by the end of the year. Wall Street can live with a weak patch in growth, as long as it doesn't morph into something worse.

The recent string of records in the stock market -- the Dow, S&P 500 and Nasdaq all touched all-time highs on Friday -- has been fueled by hopes of a preliminary trade agreement between the United States and China and easy money from the Federal Reserve.

The CNN Business Fear & Greed Index is flashing "extreme greed." Just a month ago this gauge of market sentiment was stuck in neutral.