THE UPSHOT: N.C. passing up $13 billion for health care over next decade 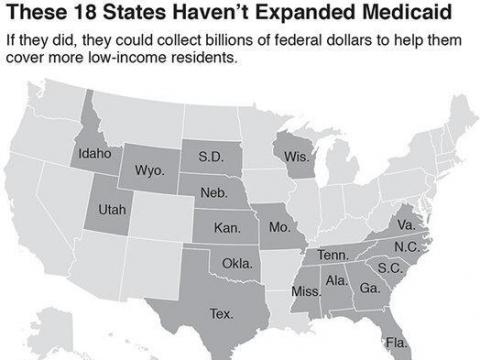 The following report, by Margot Sanger Katz and Kevin Quealy, is from "TheUpshot," a section of The New York Times that provides news, analysis and graphics about politics, policy and everyday life.

For years, red states like North Carolina have effectively been subsidizing part of health insurance for blue states.

By declining to expand their Medicaid programs as part of the Affordable Care Act, many of those states have passed up tens of billions of federal dollars they could have used to offer health coverage to more poor residents. That means that taxpayers in Texas are helping to fund treatment for patients with opioid addiction in Vermont, while Texans with opioid problems may have no such option.

Now new estimates prepared by the consulting firm Avalere Health for The Upshot give a sense of just how much states are giving up. Texas could collect around $42 billion in Medicaid over a decade if it opted in, according to the Avalere analysis. Tennessee could pull in around 5 percent of its state budget next year. Altogether, Avalere estimates that the 18 states that have still not expanded Medicaid could give up more than $180 billion over the next 10 years.

Blue states generally subsidize red states, so this a notable counterexample to the overall trend.

“They are leaving a lot of money on the table that would cover a lot of people, full stop,” said Chris Sloan, a senior manager at Avalere who helped build the model.

Every state is required to provide Medicaid coverage to certain groups: poor children and pregnant women, people with disabilities, and poor older people requiring long-term care. But the Obamacare expansion provides coverage for many poor parents and childless adults who were less often covered in the program. The health law provides federal funding for states to include all residents who earn below or just above the federal poverty line — the limit is about $16,000 for a single person.

In the first three years of the expansion, the federal government paid 100 percent of the tab. But now states need to chip in a small share to cover the expansion population’s medical bills. That share, 5 percent this year, is set to rise to 10 percent in 2020.

Some state governments and local think tanks have prepared estimates of the costs and benefits of Medicaid expansion in their region. But the Avalere analysis is the first to apply a consistent methodology across all of the states that have declined to expand. Some of the numbers are big. Florida would get an estimated $26 billion over the next decade, according to Avalere; North Carolina $13 billion.

The Medicaid expansion has been the subject of substantial scholarly attention. Strong evidence suggests states’ expansion has helped improve the financial health of their low-income residents, as well as the financial performance of local hospitals. Studies also show that Medicaid coverage has helped low-income Americans get access to health care, though there is not yet strong evidence about whether it has improved their physical health.

Research has found that the Medicaid expansion does not appear to discourage low-income people from working. More speculative articles have suggested that the influx of federal dollars may help strengthen state economies, though there is little hard evidence of such effects.

Governors in expansion states have argued that the money has been particularly helpful in helping residents battle addictions to opioids.

A recent study found that, in the early years of the expansion, there were no hidden costs to state budgets — and that states spent no more on their programs than states that declined to expand. In some states, it appears that expansion has improved state finances, by reducing the need for programs that pay doctors and hospitals directly for uncompensated care, among other ancillary effects. There is evidence that Medicaid expansion has lowered insurance premiums for middle-class residents who buy their own insurance.

Some states are likelier to come out ahead than others. Benjamin Sommers, an associate professor at the Harvard School of Public Health who studies Medicaid, said Wisconsin, for example, might actually save money overall if it accepted federal expansion dollars.

But legislators and governors in the holdout states have consistently opposed the expansion, citing a range of political, ideological and fiscal concerns. One big issue, experts say, is the expansion’s link to Obamacare, a law that Republicans have vowed to repeal from the beginning. “It’s made it very hard for them to turn around and embrace one of the only optional parts of it,” said Matt Salo, executive director of the National Association of Medicaid Directors, who has closely watched the debate. “There is ample evidence from the states that have done it that there is substantial benefit.”

Some state officials also object to a program that provides benefits to poor residents who don’t work. Studies have shown that the large majority of expansion beneficiaries are working, in school or caring for a sick family member. But the Trump administration has signaled that it will allow states to condition coverage on “community engagement activities,” a policy change that could interest some reluctant politicians.

For some states, finding 10 percent of the dollars may be a challenge. David Dzielak, Medicaid director in Mississippi, a state that has not expanded, said raising even a small fraction of the funding would be hard, especially after recent corporate tax cuts. The Avalere numbers suggest that the 6 percent of Medicaid expansion costs that Mississippi would need to pay if it expanded next year would represent less than 1 percent of its 2016 general fund spending.

“It’s all about the money, really, and our state is so poor that we can’t even afford the 10 percent for the expansion,” he said. “That’s really the bottom line.”

But not every state that has expanded its program has been wealthy, and some of those have been red states. Louisiana, for example, expanded Medicaid last year, providing health coverage to around 430,000 people, despite limited fiscal capacity and state budget challenges. Some of the largest coverage gains have come in poorer states, including West Virginia, Arkansas and Kentucky.

Sara Rosenbaum, a professor of health policy at George Washington University, said states generally fight to maximize federal funding for their programs. She described Medicaid expansion as a striking counterexample, where political preferences have sometimes outweighed the desire for resources. “It’s so much revenue,” she said. “That’s when you know we’re not dealing with dollars and cents.”

Medicaid expansion states could keep growing. Voters in Maine last week approved a ballot measure to expand Medicaid. And recent legislative gains by Democrats in Virginia could change the politics of the issue there. Activists in other states, including Kansas, Utah and Idaho, are mobilizing for a renewed expansion push in the coming year.

The Avalere estimates are rough, but they show what would happen if each state’s expansion resulted in a decrease in the uninsured rate among low-income residents that is similar to the average decrease in states that have already expanded their programs. The model then made adjustments for the size of the poor, uninsured population, and the different costs of providing Medicaid care in different states.

In the states that have expanded already, there has been a wide range of effects. The uninsured rate among the eligible population declined by only half a percentage point in Massachusetts, which already had very broad insurance coverage. But it declined by more than six percentage points in Louisiana, where there were many more poor residents who lacked coverage. The average reduction was 2.5 percentage points.

Most of the states that haven’t expanded are likely to reap more federal dollars than these estimates if they expand, said Mr. Sloan, but analysts felt the average number was a useful, conservative estimate. (That means that our figures may also understate the amount of money that states would need to spend, too.)

Our budget numbers are for the fiscal year 2016, and come from a recent survey from the National Association of State Budget Officers. In evaluating the budget impact of the federal share of Medicaid expansion, we compared estimated federal spending with total state budgets, including current federal dollars. In evaluating the state share of the expansion funding, we compared the numbers to state general funds, to give a sense of how the program would compare with functions that the state raises its own funds to cover. State budgets typically grow by around 3 or 4 percent a year, said John Hicks, the association’s executive director, so our percentages may slightly overstate Medicaid expansion funding as a share of state budgets.