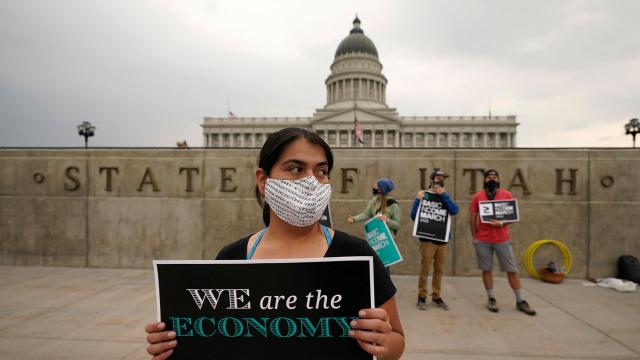 CNN — Heading into the November election, the US jobs recovery is running out of steam.

The economy added 661,000 jobs in September, the Bureau of Labor Statistics said Friday. The unemployment rate stood at 7.9%.

This is the highest the unemployment rate has been ahead of a presidential election since the government started tracking the monthly rate in 1948.

The October jobs report will be published on the Friday following the election.

The pandemic has ravaged America's previously strong job market and more than 22 million jobs vanished in the spring lockdown. If President Donald Trump loses the election, he could become the first President on record — going back to President Harry Truman — to leave the White House with fewer jobs than when he started.

Between January 2017 and September, 3.9 million jobs were lost.

President George W. Bush lost jobs during his first term in office following the recession that came after the dot-com bubble burst. In the first 44 months of the Bush administration, 605,000 jobs were lost — far fewer than under Trump. During Bush's total time in office, however, jobs were added.

Government records of monthly jobs numbers go back to 1939, the middle of Franklin D. Roosevelt's administration.

And even though the economy added back more than 1 million jobs every month between May and August, the country is still down 10.7 million jobs since February, before Covid-19 hit.

The initial jobs rebound was easier to achieve as businesses reopened, albeit under restrictions, and a lot of jobs that had vanished reappeared.

But more than six months since the pandemic hit, improvements are harder to come by as the economic downturn is taking its toll on businesses of all sizes. On top of that, funds from the Paycheck Protection Program are running low for many small businesses that have already used up the money to rehire staff.

The hospitality and leisure industries, as well as retail, added the most jobs last month, as the battered sectors continue to bounce back. Even so, employment in food services and drinking places is still down 2.3 million jobs since February.

"Today's report reveals a two-sided economy: More than 12.6 million Americans remain out of work as COVID-19 rages on, while in other pockets of the economy employers added millions of new jobs," said Glassdoor chief economist Andrew Chamberlain in emailed comments.

Another reason for the September slowdown is the government itself: Over the few past months, the Census Bureau had been hiring temporary workers for this year's count, adding as many as 238,000 workers between July and August alone. But in September, Census employment shrank by 41,000 jobs.

This is a developing story. It will be updated