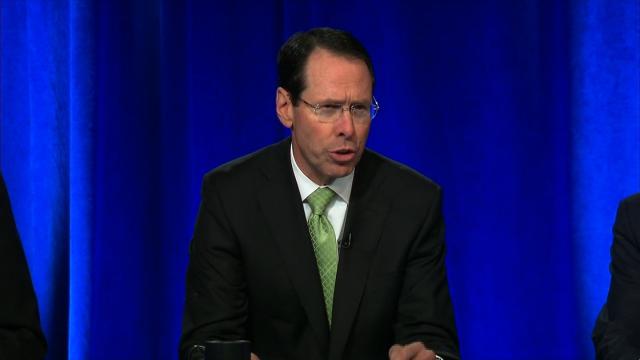 NEW YORK (CNNMoney) — Few companies in history have faced as much antitrust scrutiny as AT&T.

The Justice Department has sued the company more than a dozen times over the past century, including several landmark cases.

1913: Kingsbury Commitment. Alexander Graham Bell invented the telephone in 1876, and the company he formed (which eventually became AT&T) was a monopoly by 1907. As the company took over the nation's communications system, many Americans believed that the government would take over AT&T.

The Justice Department got involved and reached a settlement with AT&T in 1913. Technically, President Woodrow Wilson's administration never sued AT&T. Instead, the company's vice president, Nathan Kingsbury, drafted a letter agreeing to spin off Western Union and allow independent telephone companies to use AT&T's long-distance network. AT&T also agreed not to buy any independent phone companies without the government's blessing.

Essentially, AT&T became a sanctioned monopoly -- a status it enjoyed for the next seven decades.

1956: Western Electric. By the 1940s, the government had begun to sour on its agreement with AT&T.

At the time, only one company made telephones that worked on AT&T's network: Western Electric, an equipment supplier owned by (you guessed it) AT&T. Customers couldn't even buy their own phones. They had to rent them -- a service that, amazingly, still exists.

The government sued AT&T in 1949 and settled seven years later. AT&T agreed to sell Western Electric and was barred from venturing outside its core phone business -- connecting telephone calls. It also agreed to license its patents to potential competitors.

1982: Breakup. Over the decades, technology developed that allowed competitors to enter the phone market. Companies like MCI used microwave communications to bypass AT&T's copper-wire infrastructure and establish their own long-distance networks. The government no longer saw the need for AT&T to maintain its monopoly.

In 1974, the Justice Department sued to break up AT&T. It was settled eight years later with AT&T divesting its local exchanges. They became seven regional "Baby Bells." AT&T kept its long-distance business, and the government backed off its 1956 agreement: AT&T was allowed to enter new lines of business.

AT&T broke up in 1984. Eventually, AT&T entered the broadband and wireless businesses.

2005: SBC. With AT&T on the decline, it became a takeover target. Southwestern Bell Corp., the biggest of the Baby Bells, tried to buy it in 1997. Before the Justice Department got to weigh in, the FCC blocked the deal.

Over the next few years, AT&T became a shell of its former self. SBC got the last laugh, ultimately buying its former parent company for $22 billion in 2005.

Before approving the deal, the Justice Department sued to force the companies to divest some assets.

2011: T-Mobile. Over the next few years, the new AT&T developed into the second-biggest wireless company. It landed an exclusive deal to carry Apple's iPhone in 2007, and the company was embarrassed with widespread complaints about lousy coverage.

AT&T tried to buy T-Mobile, then the fourth-largest wireless carrier. It claimed that the deal was necessary because of a nationwide wireless spectrum crunch that was slowing its data speeds. It would have created a megacompany with well over 120 million subscribers.

The proposed $39 billion deal immediately faced heavy resistance from the Justice Department and the FCC, both of which sued to block it. AT&T abandoned its plans to buy T-Mobile in December 2011.

2017: Time Warner. AT&T announced in 2016 that it would buy CNN parent company Time Warner for $85 billion. After buying DirecTV earlier in the decade, AT&T became the country's largest provider of television services. It sought to gain control of some of the content flowing over its network.

The deal was widely expected to be approved because AT&T and Time Warner don't compete with each other. Yet President Trump's Justice Department just became the first since the Carter administration to fight a merger between two companies in different lines of business.

AT&T has pledged to fight the order in the courts.