The Trump Conspiracy Is Hiding in Plain Sight 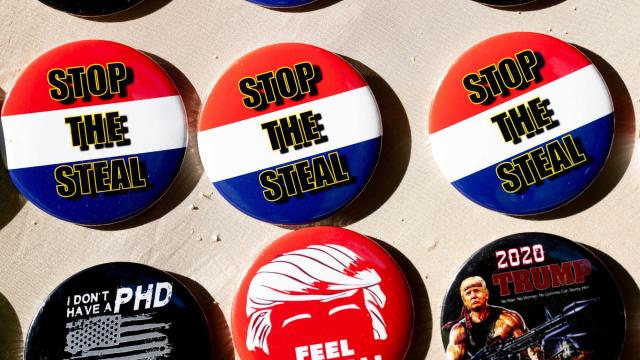 Antebellum pro-slavery radicals spoke freely of secession and violence, Democratic Party paramilitaries planned their attacks on Reconstruction governments in public view, and the men who codified segregation into Jim Crow did so in the open. Bad actors, in other words, do not always make their plans in secret.

When people plot to do wrong, they often do so in plain sight. To the extent that they succeed, it is at least partly because no one took them as seriously as they should have.

And so it goes with the plot to restore Donald Trump to power over and against the will of the voters. The first attempt, prefigured in Trump’s refusal in 2016 to say whether he would accept the results of the presidential election, culminated in an attack on the Capitol this year, broadcast on camera to the entire world. Since then, the former president and his allies have made no secret of their intent to run the same play a second time.

Steve Bannon, a former Trump adviser and White House official, hosts a popular far-right podcast where he has urged his listeners to seize control of local election administration. “It’s going to be a fight, but this is a fight that must be won, we don’t have an option,” he said in May. “We’re going to take this back village by village, precinct by precinct.”

Those listeners were, well, listening. “Suddenly,” according to a recent ProPublica investigation, “people who had never before showed interest in party politics started calling the local GOP headquarters or crowding into county conventions, eager to enlist as precinct officers. They showed up in states Trump won and in states he lost, in deep-red rural areas, in swing-voting suburbs and in populous cities.”

Many of these new activists very much want to “stop the steal.” In Michigan, notes ProPublica, “one of the main organizers recruiting new precinct officers pushed for the ouster of the state party’s executive director, who contradicted Trump’s claim that the election was stolen and who later resigned.” In Arizona, likewise, new Bannon-inspired precinct officers have “petitioned to unseat county officials who refused to cooperate with the state Senate Republicans’ ‘forensic audit’ of 2020 ballots.”

The obvious point of all this is to eliminate resistance should the outcome of the 2024 presidential election come down, once again, to the fortitude of local officials. In his desperate fight to subvert the outcome of the 2020 election, Trump probed for and found the soft spots in our electoral system. His supporters are fighting to make them more vulnerable.

In tandem with the fight to seize control of election administration is an effort to gerrymander battleground states into nearly permanent Republican legislative majorities. “In Texas, North Carolina, Ohio and Georgia,” according to my colleagues in the newsroom, “Republican state lawmakers have either created supermajorities capable of overriding a governor’s veto or whittled down competitive districts so significantly that Republicans’ advantage is virtually impenetrable — leaving voters in narrowly divided states powerless to change the leadership of their legislatures.”

In these states, Democrats could win a narrow majority of voters but gain fewer than half of the seats in the state legislature, while Republicans could win with that same majority and gain far more than half the seats. It’s an affront to the ideal of political equality, to say nothing of the “one person, one vote” standard enshrined in the 1964 Supreme Court decision in Reynolds v. Sims. A system in which some voters are worth much more than others — and where popular majorities are locked out of power if they contain the wrong kinds of people — is many things, but it isn’t a democracy (or, if you prefer, a “republic”).

These impenetrable supermajorities serve a purpose beyond simple partisan advantage. The belief that Trump actually won the 2020 election is backed by the belief that elections are less about persuasion and more about rigging the process and controlling the ballots. And in the swing states that Trump lost, his strongest allies have pushed the radical idea that state legislatures have plenary authority over presidential elections even after voters have cast their ballots. Trump may lose the vote in Arizona, but under this theory, the legislature could still give him the state’s electoral votes, provided there is some pretext (like “voter fraud,” for example). What this would mean, in practice, is that these legislatures could simply hand their state’s electoral votes to Trump even if he were defeated at the ballot box.

It’s with this in mind that we should look to Wisconsin, where Republicans are fighting to seize control of federal elections in the state now that they’ve gerrymandered themselves into an almost-permanent legislative majority. (The Wisconsin Republican Party, along with the one in North Carolina, has been at the vanguard of the authoritarian turn in the national party.)

Last month, Sen. Ron Johnson said that lawmakers in his state could take control of federal elections even if Gov. Tony Evers, a Democrat, stood in opposition. “The state Legislature has to reassert its constitutional role, assert its constitutional responsibility, to set the times, place and manner of the election, not continue to outsource it through the Wisconsin Elections Commission,” Johnson said, in reference to the bipartisan commission Republicans had established to manage elections. “The Constitution never mentions a governor.”

And of course, Trump is taking an active role in all of this. From his perch in Mar-a-Lago, he has endorsed candidates for state legislative elections in Michigan with the clear hope that they would help him subvert the election, should he run as the Republican nominee for president in 2024. “Michigan needs a new legislature,” Trump wrote last month in one such endorsement. “The cowards there now are too spineless to investigate Election Fraud.”

Increasingly untethered from any commitment to electoral democracy, large and influential parts of the Republican Party are working to put Trump back in power by any means necessary. Republicans could win without these tactics — they did so in Virginia last month — but there’s no reason to think that the party will pull itself off this road.

Every incentive driving the Republican Party, from Fox News to the former president, points away from sober engagement with the realities of American politics and toward the outrageous, the anti-social and the authoritarian.

None of this is happening behind closed doors. We are headed for a crisis of some sort. When it comes, we can be shocked that it is actually happening, but we shouldn’t be surprised. This article originally appeared in The New York Times.