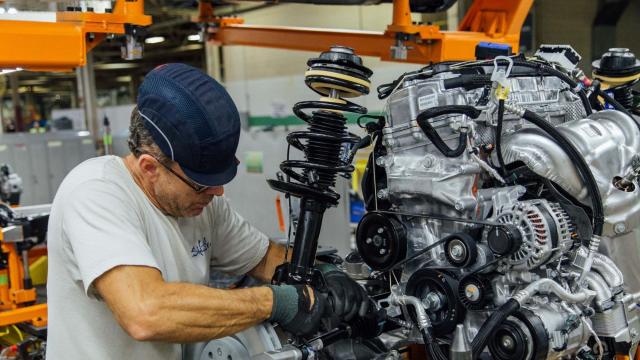 CNN — The plunge in auto sales in China has made its way to the US heartland.

Nearly 1,400 autoworkers in Belvidere, Illinois, will lose their jobs as a result of weak demand in China for the Jeep Cherokee.

Fiat Chrysler announced it is eliminating the third shift at the Illinois plant in May. It said that the layoffs are needed to "better align production with global demand." The company also cut its sales outlook for 2019 because of the slowdown in the Chinese auto market.

The Cherokee sells well in the United States. Sales of the small SUV were up 41% last year and continued to be strong in January. But Fiat Chrysler says it has seen a drop in global demand for the car.

The company wouldn't say exactly where the drop-off in Cherokee sales occurred, but its last earnings statement made clear it is suffering the biggest sales weakness in China.

China is the world's largest market for auto sales, and has been the engine for growth for the global auto industry for most of the last two decades. But over the last six months the country has become a source of concern for automakers.

The plunge in Chinese auto sales in the second half of 2018 occurred as the growing trade dispute with the United States slowed the Chinese economy significantly.

Fiat Chrysler reported that its overall sales in the Asia-Pacific region plunged 28% last year, with an even bigger drop in China. It also faces increased competition there, "particularly in the SUV segments," according to its earnings statement.

Fiat Chrysler builds the Cherokee at one of its two assembly plants in China.

But Fiat Chrysler and other automakers don't want to cut back production at their plants in China in case growth resumes there soon, said Rebecca Lindland, an auto analyst.

The Chinese plants also have lower wages than the ones in the United States and Europe, so it makes sense for Fiat Chrysler to keep some production in China. Rather than shipping Cherokees from Illinois to other markets, Fiat Chrysler can ship the SUV from the China plant instead.

George Welitschinsky, president of the United Auto Workers local union at the Illinois plant, says it was building about 1,200 cars a day last year, and is down to 830 a day now, primarily because of the drop in exports. He said most of those exports were going to Europe, which he said he believes is now being supplied out of China.

"There's a lot of confusion and concern," he said about the loss of the shift. "Nobody likes to be laid off."

Fiat Chrysler had some good news for autoworkers as well this week. It announced that it would convert a closed engine plant in Detroit into a new assembly factory for Jeep. That and other investments announced Tuesday will add 6,500 jobs in Michigan.

Some of the laid-off Illinois autoworkers will have a right to transfer into those new jobs, though the first of those jobs won't be available until late next year.