The Sikorsky S-76B was built to carry VIPs like Kobe Bryant. Here's what we know about the helicopter 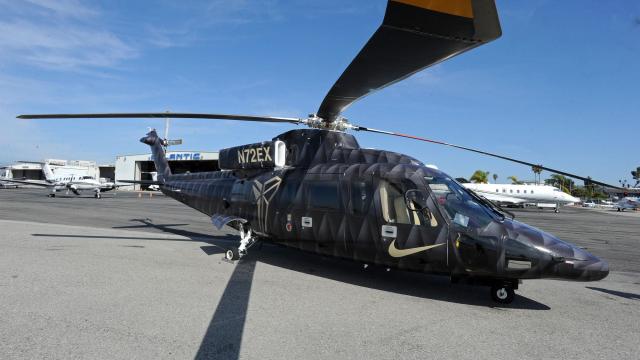 CNN — The Sikorsky S-76B that crashed in Calabasas, California, killing Kobe Bryant and eight others, is a "workhorse" with a strong record of reliability, and it was outfitted to carry high rollers like the Los Angeles Lakers legend, aviation experts say.

While Sunday's crash remains under investigation, weather and flight information indicate it was a less-than-ideal day to fly in Southern California.

The pilot was given special permission -- known as a special visual flight rules clearance -- because of weather in the area Sunday morning. At one point, an air traffic controller informed the pilot, "You're still too low for flight following at this time," meaning the chopper wasn't flying high enough to register on radar.

Authorities have yet to reveal a cause for the crash, but those familiar with the chopper say its safety record is impeccable.

"It's a workhorse," aviation analyst Miles O'Brien said. "It's the flying Lincoln Town Car for executives. This is what corporate helicopter aviation is built on -- on this Sikorsky."

O'Brien added, "It's twin-engine. It's reliable. It's safe. It's capable."

Reliable and built for VIPs

According to the Sikorsky Aircraft Corp., which is owned by defense and aerospace giant Lockheed Martin, the S-76 line has logged more than 7.4 million flight hours, serving as offshore oil and gas transportation, air ambulances, executive transport and search-and-rescue aircraft.

First built in 1977, Sikorsky has delivered more than 875 S-76s across the world, the company says. While 178 customers employ the model in a corporate or VIP role, 10 countries use the aircraft to ferry their heads of state, Sikorsky says.

Bryant's helicopter was built in 1991, according to California records. Though the layout of Bryant's chopper is unclear, Sikorsky says its S76-D model can carry two pilots and eight passengers.

The state of Illinois previously used Bryant's helicopter for "VIP transport" from 2007 to 2015, when then-Gov. Bruce Rauner sold the state's aircraft fleet for budgetary reasons, the Helis helicopter database says.

Island Express Holding Corp. of Van Nuys bought the helicopter and changed its tail number to N72EX -- the identifier it was using when it went down Sunday.

On April, 13, 2016 -- the day Bryant dropped 60 points on the Utah jazz in his career finale -- Nike posted a photo of Bryant posing in front of the helicopter, which bore a Nike swoosh and Bryant's trademark "Black Mamba" logo with the caption, "One last ride #MambaDay." Sikorsky retweeted it the following day, saying, "Two legends, one photo...Kobe Bryant flies the #S76 to his final game."

Both tweets disappeared following the crash.

Kurt Deetz is a former pilot for Island Express Helicopters and told CNN he flew Bryant on numerous occasions in that very aircraft between 2015 and 2017, including the flight home from his final game. The limited number of pilots qualified to operate the helicopter -- Bryant's preferred model -- need at least a couple thousand hours of flight time on a twin-engine chopper, he said.

Before joining Island Express, Deetz gained experience with the aircraft flying for Exxon Mobil, he said. He described the model as luxurious and more complex than other choppers but said it's a "very reliable aircraft."

"They just don't fall out of the sky," he said, further describing the S-76B as nearly "bulletproof."

Little is known of Island Express. Its website was "under construction" Monday. A cached version of the website from July advertises flights to Catalina Island, charters, aerial tours and vacation packages.

A call and email to Phillip DiFiore, who California records list as Island Express' "agent for service of process," were not returned. Island Express' address is linked to another company, Rotorcraft Support Inc., which lists DiFiore as its president and director of maintenance. No one from Rotorcraft could be reached for comment, either.

The cached Island Express website features a photo of the doomed chopper -- with a white-and-teal color scheme -- and says the company "operates the West Coast's largest fleet of Sikorsky S76 passenger aircraft, the most-trusted name in helicopters." The helicopter boasts unparalleled reliability and a "proven safety record," the cached website says.

Prior to Sunday, there had been no crashes involving an S76 since 2013, the National Transportation Safety Board reports. Of 53 incidents or crashes since 1979, at least a dozen have resulted in deaths, according to the NTSB database.

Though it's never apples to apples, the S76 statistics would appear to compare favorably to other aircraft. For example, the Bell 407 is another versatile chopper and there are several hundred more Bell 407s in service. Since 1996, Bell 407s have been involved in 130 incidents or crashes, about a third of which ended with fatalities, the NTSB says.

Helicopters a matter of health and family

That Bryant was a fan of helicopter travel was well-documented. In a 2010 GQ interview, he said he took a private helicopter from his Orange County home to every home game in Los Angeles' Staples Center.

"Bryant says the helicopter is just another tool for maintaining his body," the article said. "Given his broken finger, his fragile knees, his sore back and achy feet, not to mention his chronic agita, Bryant can't sit in a car for two hours. The helicopter, therefore, ensures that he gets to Staples Center feeling fresh."

More recently, Bryant told former baseball star Alex Rodriguez in a 2018 interview he came to rely on helicopters once the Southern California traffic began keeping him away from his family.

"I had to figure out a way where I could still train and focus on the craft but still not compromise family time," Bryant said. "That's when I looked into helicopters and to be able to get down and back in 15 minutes and that's when it started. So my routine was always the same: weights early in the morning, kids to school, fly down, practice like crazy, do my extra work, media -- everything I needed to do -- fly back, get back in carpool line, pick the kids up."

His wife once told him she could pick up the kids from school, he said, but Bryant insisted on doing it. Bryant had three children at the time; his fourth daughter was born last year.

"'No, no, no, I want to do that,'" Bryant said he told her, "because you have road trips and times when you don't see your kids, so every chance I get to see them and spend time with them, even if it's 20 minutes in the car, I want that."