The Shooting Victim Died at 16, and The Suspect Is Even Younger. 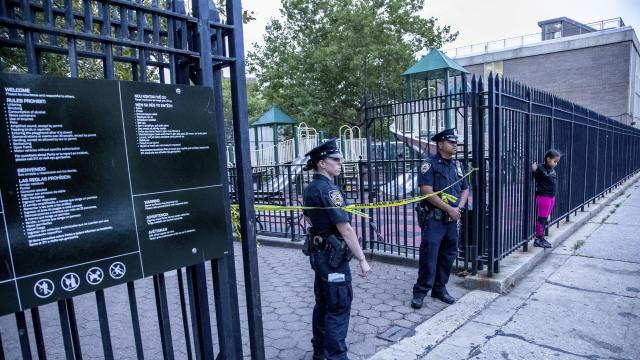 NEW YORK — When a 16-year-old was shot dead on a Brooklyn basketball court two weeks ago, the killing of someone so young sent ripples of shock through the neighborhood, prompting memorials, vigils and calls for justice.

That sense of bewilderment in Brownsville deepened Monday when police announced they had identified a suspect: a boy two years younger than the victim.

The police said they are searching for Aaron Nathaniel, 14, who they believe fired at least two shots into the basketball court at Chester Playground on a warm Friday afternoon Sept. 21.

Oluwadurotimi Joseph Oyebola, 16, had just dribbled to the corner of the court and pulled up for a 3-pointer. Shots rang out. A bullet struck him in his forehead.

The motive remains unclear. Police officials said the gunman did not appear to specifically target the teenager, and it remains unknown who was the actual target. “He was the unlucky guy,” one police official said, insisting on anonymity to discuss an open case.

The young suspect was in hiding Tuesday, although police officials said his parents were cooperating with investigators.

He was identified as the gunman through security camera footage and witness accounts, the police said. The footage shows Nathaniel arriving at the park, pulling out a pistol and firing it in the direction of the basketball court, the police said. The fatal shots were fired from about 100 feet away from the spot where the victim, who was known as Timi, was playing with friends.

Timi was a junior at Brooklyn Ascend High School, where he was a well-liked academic standout and a point guard on the basketball team. He had moved to New York City from Lagos, Nigeria, in 2013, his father, David Oyebola, said.

The killing was the latest in a string of murders in the Brownsville area of Brooklyn, one of the few neighborhoods where violent crime has trended upward even as it has fallen citywide to the lowest level since the 1950s. Four teens were killed within 6 miles of each other in the area during a 10-day period this July. Last year, another teenager, Rohan Levy, who also had attended Ascend middle school, was killed.

Police records show there have been 13 murders this year in the precinct that covers Brownsville, up from seven in the same period in 2017. There has also been an uptick in shootings: 47 people have been wounded by gunfire this year within the precinct, up from 36 at this time last year.

On Monday night, about 150 people met at Brooklyn Ascend Charter School and marched to the basketball court for a vigil. His relatives led the procession, while friends and supporters trailed behind, chanting: “Stop shooting, start living, Timi lives forever.”

It is rare, but not unprecedented, for a 14-year-old to be charged as an adult with murder. The last time was in 2014, when Noel Estevez was charged with second-degree murder after the stabbing death of a classmate outside a Bronx school.

Assistant Chief Jeffrey Madrey, who leads patrol operations in Northern Brooklyn, held up a wanted poster with a picture of the teenage suspect at the vigil and asked for the public’s assistance in finding him. Madrey said he was tired of seeing young people fatally shot and then trying to console their grief-stricken parents. “I offer some kind words, but I cannot bring their child back,” he said.

Jonathan Charles, 16, a classmate and teammate, was one of about 10 youths playing basketball when the gunshots rang out. The players had taken a short break and were hanging out by the 3-point line, he said. Only Timi was still shooting baskets.

“He was getting ready to shoot a 3-point shot and that’s when two bullets hit him,” Jonathan said.

Dominic Frankie Pabon, 23, a Marine Corps veteran who lives in Brownsville, heard the gunshots in his sixth-floor apartment near the playground and raced downstairs.

He said he sprinted onto the court and knelt by Timi, who was surrounded by distraught friends. He put pressure on the wound and instructed another player to do the same. Blood poured from the wounded teenager’s mouth and nose, he said.

“I had my hand on his head,” he recalled of that day. “I said, ‘Timi don’t leave, don’t give up.’ And he tried to respond with every breath he had left.”

Pabon, who spoke at the vigil, said he felt a sense of guilt.