The rise of the social media 'Fembot' 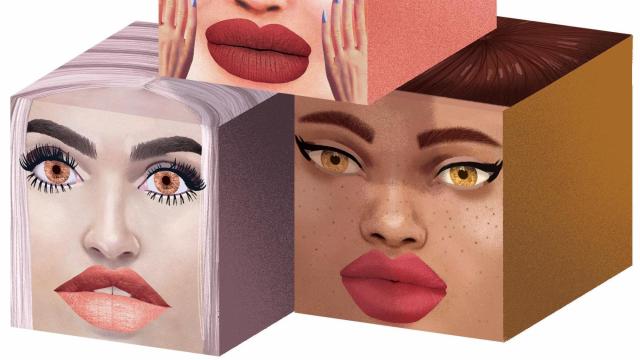 For much of the show, she perched silently on the couch and methodically stacked candies on a glass table. A longhaired handler called Titanic Sinclair accompanied her, explaining, “I’m just making sure she doesn’t malfunction.”

Poppy proved a tough interview. Asked what she thought of the Grammys, which had aired the night before, she chirped: “Um, I don’t really remember them.” Then she changed into a costume that made her look like a beautiful egg yolk and performed “Bleach Blonde Baby,” a song about how she was born with full makeup and a mani-pedi.

Poppy is — to sum up her project most simply — an android-themed human pop star. She first appeared on YouTube in 2014, in a video where she eats cotton candy while an overdubbed soundtrack plays oddly pleasant eating sounds. When she speaks, Poppy exhibits the limited range of a chat bot, the oddly formal vocabulary of a digital assistant (she says “New York New York” and “YouTube dot com”) and the late-capitalist tics of an online influencer.

In “Hey YouTube,” she repeats vlogger greetings — “What’s up, guys?” and “Hey YouTube!” — until they lose their meaning. In “I am empowered,” she purrs, “I feel empowered when I create high-quality content on the internet” over and over again. The fembot has long been a pop culture fixation, but now feminized tech is all around us. Digital helpmeets like Apple’s Siri, Amazon’s Alexa and Microsoft’s Cortana are fitted with nonthreatening feminine voices and programmed to respond to sexist comments with cutesy repartee. (If you tell Siri to make you a sandwich, she replies: “I can’t. I have no condiments.”)

And, of course, we can conjure the illusion of intimacy with famous women as we scroll through their Instagram profiles and consume their Snapchat feeds, dispensing or withholding likes. Projects like Poppy poke at the cyborg nature of online fame itself, where female bodies are mapped onto the social platforms they inhabit — constantly resized, customized and upgraded to please their followers.

Poppy’s YouTube videos have been viewed more than 257 million times, and now her persona is permeating the culture: She has logged a “Today” show appearance, a Times Square billboard, a Comedy Central Snapchat series and a Sanrio sponsorship. She’s now in the midst of a U.S. concert tour and starring in a web series pilot, “I’m Poppy,” on YouTube’s paid subscription tier, YouTube Red.

The commentary of Poppy is not exactly subtle, but the performance of the woman behind her — the 23-year-old Moriah Pereira — is eerily fascinating. (Titanic Sinclair, her creator-handler-director figure, is played by the 30-year-old Corey Mixter.) Poppy’s voice has the soothing affect of an ASMR video, those recordings of rustles and whispers capable of evoking tingling sensations on the back of your neck. The way she pauses and freezes between statements — as if she is downloading a new dialogue program and recalibrating her expression to fit it — is uncanny.

If Poppy is a person who acts like a robot, Lil Miquela is a CGI creation posing as a human being. She’s a computer-animated Instagram model edited into real backgrounds, posed with real people and dressed in real streetwear that you can buy, too. Her look — enormous matte lips, thick eyebrows, a dusting of freckles on her Barbie-smooth skin — is an exaggerated version of the beauty standard that’s swept the platform, making its most-followed women look oddly similar and a little bit unreal.

Now she has her own side hustle, too, a series of clubby singles featuring her heavily Auto-Tuned voice. Miquela draws out tensions about the authenticity of social media performance; sometimes she filters her face through stylized anime beauty apps, layering artifice on artifice. She does not say much, but in a rare phone interview posted on YouTube, a woman calling herself Miquela parried a question about her fakeness with a provocation: “Can you name one person on Instagram who does not digitally edit their photos?”

Fembots are being designed to look more like internet stars, but perhaps internet stars are being designed to look like fembots, too. Take Kylie Jenner, who now ranks among Instagram’s most popular users — she recently topped 100 million followers — and who holds great sway over the platform’s aesthetic, which she molds through example but also via sales of her wildly popular Kylie Cosmetics line.

Clicking through an image gallery of Jenner’s changing looks over time — watching her lips balloon with fillers, her skin tone deepen, her eyes pop open and her facial features chisel — gives the sensation of a model’s upgrading. A fan of wigs, Jenner changes her hair color so frequently (often into shades of neon or sorbet) that it recalls the ease of a Photoshop click and the appeal of an endlessly customizable object. It is so typical for Jenner to appear on Instagram with her phone in the shot that she begins to evoke the image of a cyborg, device permanently attached to her hand.

Then there is Jenner’s affect: blank. She posts video clips of repetitive motions that loop over and over again — freshly manicured fingers stroking a piece of fur, a glittery eyelid half-opening — giving her an animatronic vibe. In a 2015 feature for Interview magazine, Chris Wallace, then the senior editor, described Jenner as “almost sex-doll sanguine.” On the cover, she appeared clad in latex fetish gear, posed in a wooden shipping container or tucked under a man’s arm, staring into the middle distance.

Though the field of artificial intelligence is bent on creating robots that seem realistic — ones that can pass the Turing test by persuasively mimicking human beings in conversation — the subfield of fembot creation seems more fixated on creating something physically perfect but mentally deficient. In the online magazine Real Life, Janna Avner smartly noted that the fembot creator “turns the limitations of bot technology into a kind of strength.” The failure of artificial intelligence to actually match human intelligence is a feature, not a bug.

The sex robot memes on Twitter play off the moment when the doll becomes sentient, when she begins criticizing her owner or asking about their relationship status, at which point he lunges for the reset button or unplugs her.

The idealized digital women of film and television — “Her,” “Ex Machina” and “Westworld” — become nightmares when they acquire minds of their own. But our cyborg internet stars are suspended on the web without a redemption narrative. Followers of Poppy, Lil Miquela and Kylie Jenner can be consumed by the mysteries of their origin stories. Who is the architect of Poppy’s satirical project? Is Lil Miquela based on a mysterious real woman’s photographs, or was she materialized out of nothing? Which plastic surgery procedures has Jenner had? What filters does she use?

In the pilot for “I’m Poppy,” a Hollywood figure asks: “Where did she come from? Who is she with?” The answers elude him, but when he hears she has 50 million followers, he decides: “She’s perfect.” The follower count justifies the star’s existence, and their interactions animate and regenerate the star’s persona. On her reality series, E!'s “Life of Kylie,” Jenner has said that her followers drive her pressure to post more and better selfies to Instagram and that she will delete images that do not instantly please, turning her own image into a site of crowd curation. It is as if her fans themselves are molding her to their specifications.