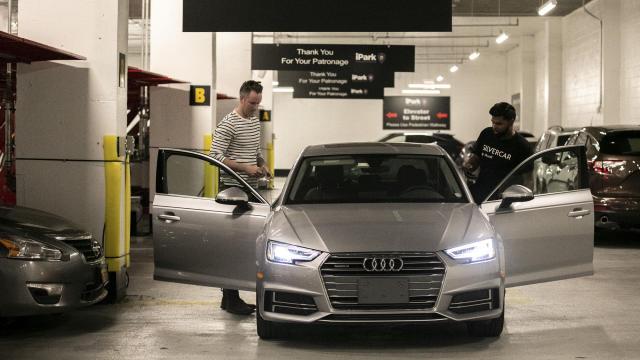 Perry Morgan, a sales representative from Ocala, Florida, said the part of a recent business trip to Oakland, California, he dreaded most was lugging four heavy suitcases on a shuttle bus back and forth from the airport terminal to the car rental center.

Not only that, he also expected that he would have to allot at least an extra half-hour on his return journey to drop off the car to Avis, the rental agent.

But the Avis employee who helped Morgan when he arrived in Oakland told him about the company’s new curbside delivery program, introduced in September, available to customers returning their rentals. For an extra $25, Morgan could drive the car to the Avis lot as usual, but instead of unloading his bags and taking a shuttle bus, he could hop in the passenger seat and an Avis employee would drive him to the terminal in the same car.

“I booked it without hesitation,” Morgan said. “I was driven right to the curb, and I only had to take my bags out once. It was the first time that renting a car at the airport was easy and fast.”

Any traveler who has rented a car at an airport has probably schlepped luggage onto a crowded shuttle bus and sat through rides to and from the rental car site that can last 15 minutes or more while the bus stops for other passengers. Then, there is the wait to pick up and return the car.

Avis is among a handful of car rental companies that are trying to take some pain, and time, out of the return portion of the trip by offering a terminal drop-off service. Silvercar by Audi and Budget Car Rental, which is owned by Avis, also have terminal drop-offs. Hertz drops off its Gold Plus Rewards Platinum members, and employees drive other customers to their terminals whenever they can, said Charlie Catalano, a spokesman. He said the company was “working on initiatives to expand this service further for both drop-off and pickup at select airports.”

Fox Rent a Car employees also drive customers to their terminals when they can, a spokesman said.

The move to offer curbside drop-offs comes as car rental companies are facing growing competition from ride-hailing apps like Uber and Lyft at their airport locations, said Neil Abrams, the founder of Abrams Consulting Group, who is a consultant for the rental car industry. “Some business travelers may be willing to pay a premium to use a ride-sharing service because it’s a significant timesaver,” he said. “But curbside drop-off evens the playing field because of the convenience it offers.”

Jonathan Weinberg, founder and chief executive of AutoSlash.com, a site that books discounted car rentals from more than 20 companies, said that rental centers can be as far as 5 miles from terminals. “In traffic and with stops, you could be looking at a long ride, which is stressful when you’re trying to catch a flight,” he said.

That is why Avis introduced its program, said Beth Gibson, vice president for ancillary revenue at Avis Budget Group. Avis customers were complaining that returning rental cars was inconvenient and took too much time, she said. “We even had some people tell us that they missed their flight because the return process could be so lengthy.”

Customers can sign up for the curbside delivery through the Avis app or with an employee when they pick up their cars. The service is offered at more than 35 cities domestically, including at most major airports like Newark Liberty International Airport, Chicago’s O’Hare International Airport and Dallas/Fort Worth International Airport. Gibson said that the service has been frequently booked since it debuted in late September and that the company’s net promoter score — a tool that the car rental industry uses to measure customer satisfaction — has increased.

Silvercar by Audi had curbside drop-off at some of its airport locations when it started in 2012, but it expanded the service this summer to all 25 airports where it has rental centers, including Denver International Airport and Los Angeles International Airport. Unlike Avis and Budget, which also charges $25 for a terminal drop-off, Silvercar doesn’t tack on an extra cost for the perk. But rentals with Silvercar start at $59 a day, making it one of the pricier options in the industry. Abrams, the industry consultant, said that the travelers most like to use curbside drop-offs probably are not price sensitive. At some airports, like San Francisco International Airport, Silvercar customers do not have to go the company’s rental center at all: They can leave their vehicle in the airport’s short-term parking lot and lock it using Silvercar’s app. They text Silvercar the location, and an employee picks up the car within an hour.

Chaz Brewer, a publicist from Los Angeles, said he appreciated that option on a late September work trip to Phoenix when he got lost on his way back to Silvercar’s airport lot. Running out of time before his flight, he called the rental center in a panic and explained his situation. “An employee told me that it was no problem to leave the car in short-term parking, which turned out to be a lifesaver,” he said. “I just about made my flight.”

Hertz and Fox Rent a Car do not have official drop-off programs at their airport locations. But spokesmen for both brands said time-crunched customers could request a ride to their terminal for no extra charge, although they emphasized that it was not a service that renters should expect. “We can’t guarantee that an employee is going to be free to drive you, but we absolutely try to make it happen,” said Mike Olson, a spokesman for Fox Rent a Car.

Weinberg of AutoSlash.com said he had taken up Hertz on this offer on several occasions this year at La Guardia Airport in New York, which is undergoing construction that can cause road delays and means that some renters need to take two shuttle buses to reach their terminals. “It took me more than a half-hour when I took the buses and less than 10 minutes when I got a ride from Hertz,” he said. “Why wouldn’t I do the latter if I can?” Car rental companies that can streamline the return process are building brand loyalty, said Bruce Temkin, the managing partner of Temkin Group, a research firm that specializes in customer satisfaction across industries, including car rentals.

“These brands, in general, have low to mediocre net promoter scores, and the main reason is because customers are unhappy with the process of picking up and returning their rentals,” he said. “These are the two areas that impact customer loyalty the most.”